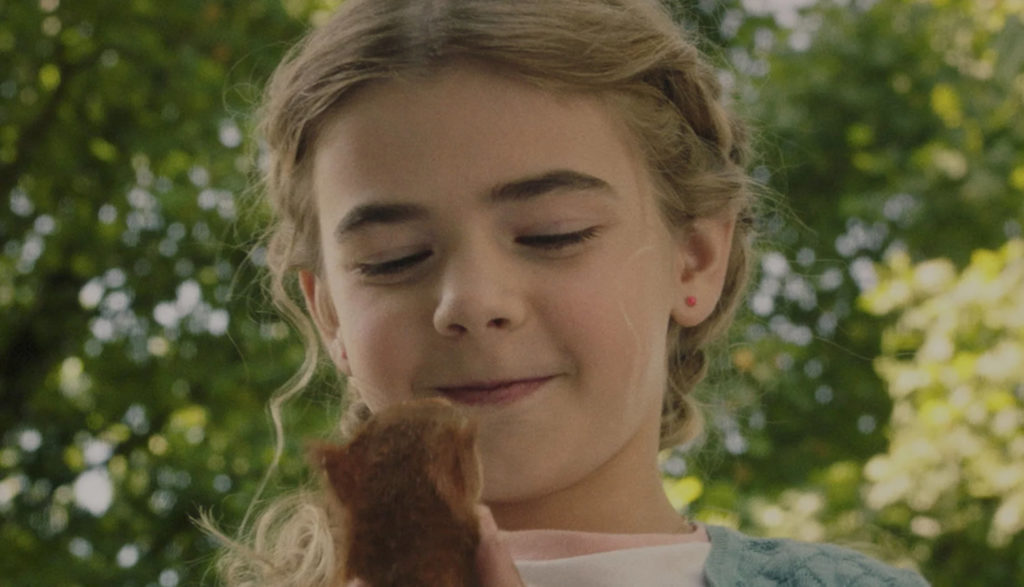 Flora Buckman is a cynic. Just ask her.

The 10-year-old wasn’t always this way. Back when her dad drew comic-book superheroes and her parents were still living together, she was a big believer in stuff like hope and wonder.

But no superhero came to save her dad, George, when publishers rejected his ideas. No superhero rescued their family when George and mom, Phyllis, separated. Her dad’s superheroes came in all sizes, all guises and with every superpower conceivable. But they—like every superhero ever inked—share one common trait, Flora says. “They never show up in the real world.”

But maybe even that rule isn’t set in stone.

Superheroes tend to be born from trauma: Batman’s parents died. Spider-Man got bitten by a radioactive arachnoid. The Fantastic Four absorbed far more cosmic rays than was strictly healthy.

And here? Our superhero-in-the-making had a serious run-in with a robotic vacuum cleaner.

The vacuum cleaner broke out of its neighbor’s house (as robot vacuums are prone to do). Flora helped chase the vacuum down, but not before it plowed straight into a squirrel, sucking the poor little varmint into its computerized workings. The squirrel looked like it was done for, but Flora—with a little quick thinking and some squirrel CPR—revived the critter.

But the squirrel returned from the vacuum of—well, the vacuum—a different sort of squirrel. Sure, he might look just like your garden variety forest mammal, but soon Flora sees that the little guy seems different from most. He can understand her. He can type poetry on Flora’s mother’s typewriter. What other mysterious abilities might be lurking underneath that soft furry coat of his?

Flora’s determined to find out. She names the Squirrel Ulysses (after the vacuum cleaner) and decides to be his sidekick, helping the squirrel to discover his purpose. But she’ll have to keep their partnership a secret from her mother for now. “She might think you’re a rat and hit you with a pan,” Flora tells Ulysses. “That’s how I lost my hamster.”

Ulysses is, deep down, a kind-hearted squirrel, and he uses his superpowers for good (as long as his stomach doesn’t get in the way). He also loves Flora as much as a squirrel can love.

But you know who else loves Flora? Her parents. Yes, Mom and Dad are going through a rough patch. Yes, they seem headed for divorce. But they both deeply care for their little girl, and their love becomes more apparent as the story progresses.

The film also reminds us that that love—as great as it might be—isn’t enough to make their separation any easier for Flora. And while that certainly isn’t a positive in itself, it does remind viewers just how important a stable, loving and intact family is. Flora would love for her parents to get back together.

And, as the film moves forward, we see that George and Beatrice kinda want that, too. We see how their own fears and anxieties got in the way of truly seeing and appreciating each other—which might be pretty reflective of many a rocky marriage.

We hear a couple of passing references to ghosts in the film.

William Spiver, a kid spending the summer next door to Flora, says that his father knew quite a bit about astronomy. When his father talked about the expanding universe, he suggested that perhaps it was just the act of “putting things where they’re supposed to be,” implying an intelligent force in play.

Both Flora and her father exclaim “Holy Bagumba!” now and again. Phyllisis very proud of an award she received for her writing—a statuette of Jack and Rose from the movie Titanic. Phyllis asks Flora to point the statue toward her as she’s writing, as a good luck charm.

In an illustration during the closing credits, Ulysses strikes a meditative pose. We hear several mentions of the word “magic,” but in a figurative, “Isn’t life magical?” sense.

Phyllis is a romance novelist, and we see pictures some of her mildly provocative book covers hanging up on the walls (some of which feature more skin than is strictly necessary). Flora tells us that Phyllis’ characters have a superpower, too, but it that it’s not something she’s “old enough to know about.” (While writing, Phyllis asks Flora to think of another word besides “steamy” that she can use. Flora—knowing that the “J” key on her mother’s retro typewriter is broken–suggests “juicy.”)

George talks about how he never inspired any of Phyllis’s characters, but how he instead was swept away by Phyllis’s laugh.

Flora discusses the Silver Surfer, and how he goes around naked without anyone seeming to know or care. Flashbacks to a beloved waterpark feature males and females in bathing suits. (Flora says that her dad used to bring an extra swimsuit and allow it to float beside him in the lazy river, “just to watch the lifeguards freak out.”). When Flora tries to smuggle Ulysses into the house under her shirt, Phyllis asks what’s up. “I’m pregnant?” the 10-year-old Flora answers.

In truth, danger does seem to lurk everywhere where Ulysses goes, as he can be a tiny instrument of chaos. In an effort to get his furry little mitts on some doughnuts in a restaurant, he lands on a waitress’s head, destroys much of the interior and eventually causes a gigantic display doughnut to crash onto a parked car. Ulysses also destroys (or indirectly facilitates the destruction) of plenty of other inanimate objects. He sometimes slams into windows, hits his head on lights and flings himself around in some slightly alarming ways.

Ulysses is hardly the only animal making a ruckus, though. A wicked cat named Mr. Claws is perhaps the most hate-filled, revenge-minded creature seen on film since we last saw Dr. Doom, attacking most every human he sees. An animal control officer endures a particularly hard time with the feline monster, and both do significant harm to the other. (At one point, the cat finds his way into the officer’s shirt and pops out of it—a not-so-subtle homage to the R-rated film Alien for older viewers) The officer leaves this encounter (and others) sporting some superficial scratches and disheveled clothes. (He may be hit in the groin by Mr. Claws at one point, too.)

Ulysses nearly dies after his encounter with the vacuum, necessitating some emergency medical attention from Flora. He’s also accused by some of carrying rabies—a diagnosis that can only be confirmed by taking some brain tissue samples. The animal control officer hopes to euthanize the squirrel, too. When trying to throw the officer off Ulysses’ trail, George and William tell the officer that the squirrel is dead.

The officer wields a dart gun. George often winds up in the path of his tranquilizing darts, leading to bouts of temporary paralysis.

William Spiver is suffering from anxiety-induced blindness, and he frequently falls or trips over things. (“I seem to have a knack for absorbing short falls,” he muses.) When he nearly tumbles from a greater height, he’s partly saved (though he does eventually land a bit roughly in a bush).

Much unsafe driving is witnessed, including one outing that leads to a vehicle’s back door being torn off. We see superheroes, both in comic books and in imaginary sequences, use their superpowers in mildly combative settings. Flora tells Ulysses that he needs to find his purpose, which could be altruistic, or it “could be revenge, which is darker. And then you have to kill people and regret it afterwards. Usually by screaming at the sky.” After Flora accidentally causes many things in a comic store to crash (including a complicated, model-based role-playing game), we’re told that the gamers named a monster after her.

Fingers are bitten painfully. We hear about how someone destroyed a car. Someone punches a guy in the face. Flora’s hit in the head with a soccer ball.

We hear a partly completed misuse of God’s name (it sounds like “Gah!”) Outside of that, the harshest the language gets here is through words like “crud.”

Phyllis and others seem to have the occasional glass of wine. Phyllis moans to George that Flora has stopped listening to her. “I’m afraid it’s drugs,” he laments.

Flora keeps secrets from her mother for a while, and she’s aided by her own dad in doing so. It seems everyone, at some point, is trying to evade the long arm of the law—in this case, the animal control office. Ulysses has a fondness for junk food. Flora gives mouth-to-mouth resuscitation on a squirrel, which seems pretty unsanitary.

Despite Flora’s self-professed cynicism, Flora & Ulysses is really about hope, and about holding onto that hope in the midst of all the world’s anxieties and setbacks. Even though Flora’s parents are separated for much of the movie, this story is still about family, too, and how important family is.

And, of course, it’s about a squirrel—one with super powers, but whose true contribution to this family has little to do with any of them.

Based on the Newberry Award-winning book of the same name by Kate DiCamillo, Flora & Ulysses is light, whimsical and, often, quite silly. It stuffs its cheeks with scads of slapstick action. It includes a bit of humor targeted more at adults than the kids watching. And certainly, the setup itself could be problematic if you think your own children are prone to adopt and hide stray squirrels in their rooms.

But for families willing to navigate such minor tripping stones, Flora & Ulysses offers a lot of heartwarming encouragement underneath all the silliness: This is a film where people overcome their fears and insecurities, where families threatened to be torn apart are put back together, where love and hope are on center stage.

And Flora & Ulysses reminds us that the world around us—even minus superpowered squirrels—is a pretty wonderous place, where special things happen every day.