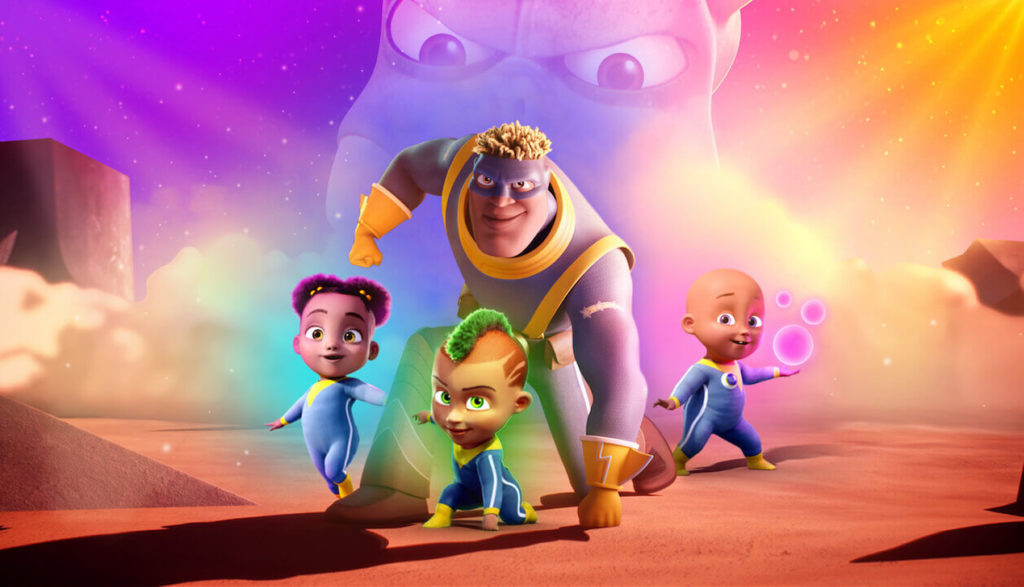 No one’s better than Reid. At videogames, that is.

Reid—or “[email protected]_,” as he’s known online—has never met a pixelated baddie he couldn’t kill, never seen a hostile spaceship he couldn’t bring down. Why, he’s gotten further on the game Planet Blaster than anyone he knows, maybe anyone in the world.

Playing as the great galactic hero Captain Lightspeed, Reid has shot and slashed his way to the final level, where he’ll presumably be asked to destroy the nefarious Dr. Arcannis once and for all. (Never mind the fact that he’s got a science project due in two weeks, or that real-life classmate Melanie is depending on his help. Dr. Arcannis isn’t going to take down himself, after all.)

But Reid will not just have to dodge Arcannis’ toothy beasties and put off that project deadline a little while longer: He’ll need to do something with the babies, too.

The kids were, admittedly, a videogame plot twist that Reid didn’t anticipate. The next-to-the-last level was also, apparently, a “bring your children to battle” opportunity for the video game’s hero. Wearing a triple-harness baby carrier (for infants Titus, Xavier and Kira), Lightspeed still managed to defeat Arcannis’ minions, thanks to Reid’s machinations. But Reid doesn’t want some pixelated babies mucking up the game’s grand finale. Lightspeed, he knows, works better alone.

“Let a babysitter change them,” Reid grumbles. “Not me.”

Thankfully, the game supplies a handy galactic daycare. Reid/Lightspeed just need to drop the rugrats off and proceed to the final level. And when the drop’s been made and the game gives him one last chance to turn back—flashing a Y/N message asking him, “Do you accept the consequences?”—Reid hesitates just a second before pressing Y. He’s not going to turn back now. Not on your life.

Reid might’ve hesitated a second more had he known.

When Reid “accepted the consequences,” he launched a final boss-battle for the ages. Lightspeed? Arcannis? They’re real, apparently—and the babies are, too. Arcannis means to steal their still-babyish superpowers and, with them, conquer as much of the galaxy as he can—starting, naturally, with Earth. But the babies escape and make their way, somehow, to Reid’s back yard.

Reid hoped to finish the game and put off his science project a little longer, no matter how much Melanie might scowl. But when you’ve got a trio of superpowered infants suddenly in your care, pursued by a megalomaniac alien genius … well, that just might force Reid to put down the game controller and swing into action in the real world.

The core message of Fearless is the same that many a mother and father deliver to their own kids: Put down the controller and go outside for a while.

Reid knows his way around a video game world. As Melanie scolds, “You seem to be more successful there than in real life.” And she’s right. But the babies force Reid to take an interest in the non-pixelated world around him. And even as he uses his video game knowledge to help their cause, the teen learns that the non-screen world is way more fulfilling than leveling up in a video game.

Melanie gives Reid a pretty good role model to aspire to. While she might be a little overly regimented (for their science project, she’s gone so far as to schedule bathroom breaks), she’s got reason to be. The high schooler is aiming to get into MIT, and she’s not going to let anyone, from Reid to Dr. Arcannis, get in her way.

And then there’s Darius Lightspeed himself, who’s apparently not just a galactic hero, but a devoted father to boot. He turns his children over to the daycare center with great reluctance. But given the dangers he undergoes afterward, perhaps it’s just as well.

Lightspeed and his offspring have, as you might’ve gathered, some unexplained superpowers, which allow them to grow greatly, shoot various rays/blasts out of their hands/eyes and conjure things up from nowhere. It’s not referred to as “magic,” but it certainly acts as such.

After it becomes clear that Earth’s airspace is getting some unexpected galactic traffic, the U.S. military swings into action—fronted by General Blazerhatch. She utters a few semi-sincere, spiritually charged exclamations, including, “Sweet God in heaven” and “Mother of all things holy.”

Reid is called by someone a “gamer god.” Melanie speculates whether we might all be just a part of someone else’s video game.

Melanie is thought to be, by some of Reid’s gaming acolytes, quite attractive. The movie’s plot doesn’t allow a lot of time for romance, but the two eventually do go on a “date” and touch hands.

That said, the fact that Reid’s parents are gone for several days—and that Reid and Melanie spend the night in Reid’s house and hang out for the entire weekend—might alarm some parents.

Lightspeed and Arcannis aren’t inclined to settle their differences through chess matches.

The video game they’re ostensibly in seems to be a violent (if not particularly bloody) one, where Reid and his fans are always looking to blow up something. Lightyear must deal with a massive toothy beast, scores of smaller ones and a legion of flying robots, shooting them with lightning and ray blasts, poking them with conjured lances and swords and occasionally flinging an axe in their direction. (The robots are destroyed, but the beasts seem no worse for wear.) Arcannis develops some frightening powers of his own, and he also totes a nifty ray gun that can (and does) immobilize people.

Arcannis’ alien henchman, Fleech, serves as the movie’s official slapstick punching bag. He’s pulled around by his eyestalks, thrown into a variety of walls and rocks, nearly gets run over by an ice cream truck and is jettisoned out into space. (He survives all ordeals.) The babies can create quite a bit of havoc, too, pulling a bookcase on top of Reid and destroying much of his parents’ house.

Jeeps roll around, nearly running over a person or two. A semi falls off a bridge and explodes. Explosions explode. Fires get fiery. Tanks are thrown. Motorcycles are ridden dangerously. Babies fall over (and are just fine). People trip and fall (and are just fine, too). Vehicles crash and careen through the air. Babies manipulate various dangerous objects as they learn to control their powers. (“Titus, do not drop a tree on your sister!” Reid is forced to say.) Conjured teddy bears can also be pretty fearsome.

We do seem to hear the word “d–n” in a song in the background, but it speeds by pretty quickly. The film also alludes to some pretty crass language. For instance, when the vehicle Reid’s driving runs into problems, he exclaims, “Shrimp!” which seems to be a nod to another s-word. And General Blazerhatch mutters, “The poopy diaper just hit the fan, and poop just got real.” Reid utters “Jeez Louise.”

Other than that, we hear some occasional name-calling and whatnot. Arcannis, for instance, calls Fleech an “imbecile” and a “pile of worthless skin cells.”

It seems as though half of Fearless’ humor is plumbed right from the bathroom.

The potty-oriented jokes are probably too numerous to detail all of them, but we hear loads of references to dirty, stinky diapers. (Melanie suggests the stench is “pure, human suffering.”) And when we see Reid change the diaper of one of the infants (who’s mostly obscured), we see the kid unleash a telltale stream of water in Reid’s direction.

We learn that Reid’s father (who’s giving a keynote address somewhere) gets “gassy” when he’s nervous, and daycare center rooms are advertised as “tinkle proof.” Someone calls for some stool samples to be taken. When Melanie asks if Reid brought any toilet paper for an impromptu camping trip, Reid suggests using the old receipts he has in his car.

Fleech apparently has some smelly expulsions of his own. Also, when Arcannis sits down in a chair that Fleech has been using, he complains that the chair’s now all “sweaty and moist.” One of Reid’s online friends makes a reference to vomit.

That’s a great message from this under-the-radar Netflix flick. For our screen-obsessed culture, it couldn’t be more timely. The irony that this message was delivered via screen? Well, that adds just a nice, thin extra layer to think about.

But while Fearless has a good heart and a kid-friendly story, frequent bathroom humor stinks up what could’ve been a welcome diversion.

Yes, kids do love laughing about smelly diapers and smelly feet and smelly everything. Fearless is just playing to its audience. But is that brand of chuckles something that parents should welcome into their homes?

That’s something for the parents to decide.