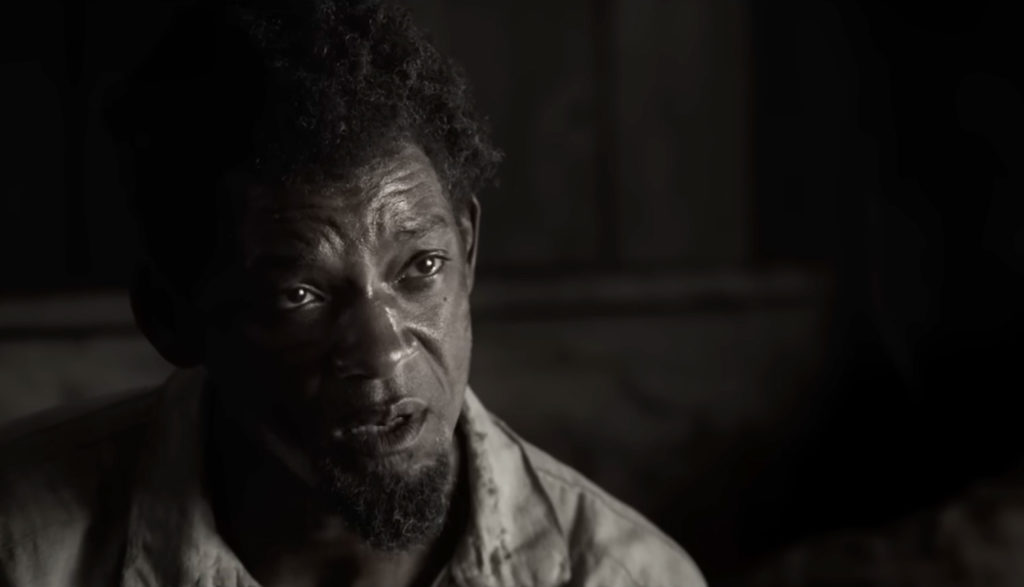 “Give thanks to the Lord, for He is good, for His steadfast love endures forever.”

That’s one of many verses Peter recites to his family as they suffer cruelty at the hands of John Lyons on his Louisianan plantation in 1863. They must hold fast to God and trust that He will deliver them out of slavery. It’s all they can do. But Peter is soon sold by John to work on building a railroad for the Confederacy—away from his family, who will remain on the plantation.

“The Lord is my strength and my defense; He has become my salvation.”

But while Peter works under the cruel hands of his new owners, he overhears some life-changing news: Lincoln has freed the slaves. News of his famous Emancipation Proclamation has made its way down into the South. Furthermore, General Grant and the Union army have taken Baton Rouge—any enslaved person who can make it there can find freedom.

Of course, the journey will be dangerous. “Runaways” are beaten, whipped, branded and tortured if they’re caught—and that’s if they aren’t just outright killed. And the journey involves a five-day trek through Louisiana swampland, filled with deadly snakes, mosquitos and alligators. But the swamp and the chance for freedom, Peter rationalizes, is much better than cruel enslavement.

Peter’s faith in God is evident, and he teaches it to his wife, Dodienne, and their children. (When Peter is gone, Dodienne reminds her children to have faith in God.) Peter’s faith keeps him pushing forward through the rough swampland, and he continually recites Scripture and prays to God.

Peter is furthermore compelled to protect others—particularly children. When one child slave is about to be shot for allegedly trying to harm his owner with a meal, Peter steps in to protect the boy, despite nearly being shot himself for it. And when Peter discovers a dying slave girl, he comforts her as she passes away.

[Spoiler Warning] When Peter finally does make it to Baton Rouge, he finds many Union soldiers there, both black and white, wanting to continue to fight for the abolition of slavery. (It should be noted that the Union troops are still segregated.) A Union general questions whether the horrific scars on Peter’s back are an indicator that he’d be a disobedient soldier rather than a fighter. Peter responds that his scars are a result of how much he continuously fought against his slaveowners despite all they did to him.

Peter relies heavily on his faith in God to get him through his treacherous journey through the swamp and away from his captors. He also receives a few divine indicators of where he should go, such as a bird which briefly flies ahead of him to guide him. As the movie opens, we’re met with Peter washing the feet of his wife, Dodienne, while he quotes various passages from the book of Psalms. Over and over, Peter reassures himself that God is with him; and if God is with him, then what can a mere man do to him (Psalm 118:6)? When Peter is forced to bring a body to a gravesite, he prays over the fallen slave.

Another slave, who recently received a brutal beating, reprimands Peter for his faith. He asks, If God is with them, then why hasn’t He set them free? He gestures at the decrepit and depressing conditions around them, saying sarcastically, “Praise your God for all He has done for you.” In response, Peter says, “I do not know why God shows Himself to some people and not others, but if you do not know Him, I will pray for you.”

And though we see many slaves relying on God to get them through their suffering as well as some Christians in the Union army, we also see a few who twist Scripture, attempting to justify slavery, including a man at a slave camp who continuously yells out sermons in favor of slavery (in stark contrast to Exodus 21:16). One family asks God to bless their meal before immediately warning people of a fleeing slave, bluntly dehumanizing the slave by shouting, “It went that way!” Meanwhile, slave hunter Jim tells Peter that he is Peter’s god, as it’s only by Jim’s authority that Peter walks the world.

Fireflies are called “God’s little angels.” Confederate soldiers are referenced as “God-forsaken devils.” And when one captured plantation owner is about to be executed, someone says “May God above show no mercy upon your pitiful soul.” Dodienne has a vision about Peter.

Emancipation doesn’t sugarcoat the violence that many slaves endured in the South. The movie throws dozens of severed limbs and gallons of blood at its audience, and the greyscale depiction doesn’t lessen these blows.

Most of the violence we see is through the suffering of many slaves. At one camp, the severed heads of black men are stuck on pikes. Some slaves are shot, and others are whipped, their screams drowning out the scene. One is dragged through camp by a horse and subsequently branded on the cheek. Fleeing men are bitten and torn at by hunting dogs, and one man’s body is eaten offscreen by alligators. People shoot a slave out of a tree, and his body falls to the ground. They then cut the man’s head off, and we later see rats biting at the corpse. A man dies from exhaustion, and his corpse is thrown into a mass grave.

Most of this is seen from Peter’s perspective, though he’s not immune to experiencing violence, either. At one point, Jim holds a barking dog inches away from Peter’s face, and another man beats Peter for trying to protect a boy. And as Peter flees, he encounters other dangers, such as an alligator which attempts to kill him (Peter stabs it many times). Peter racks up injuries throughout the film that he is forced to patch up. He uses a knife to cut an object out of his body, and he cauterizes his wound.

Peter fights back against his pursuers, too. At one point, he uses a shovel to knock one man unconscious, and he brings it down on another man’s hand, severing it from his body. When a young girl passes away, Peter uses the Christian cross necklace she gave him to stab a man in the throat. Peter also shoots a man and a hunting dog. At another point, Peter bites a man, and he is subsequently hit in the head with a weapon. And when a photographer takes a photo of Peter’s back, we see the many bruises, welts and scars which take up the majority of his back, a result of horrific whippings.

The war is ever-present within the film, too. Countless bodies are visible, many missing limbs or heavily bloodied. A man coughs up blood as he dies. A soldier, receiving treatment in a medical tent, screams horrifically as doctors attempt to staunch the bleeding from his severed legs (and we later see a large pile of severed limbs). One soldier holds his intestines in his hands and cries for his mother, and many others are shot by rifles or blown up by cannon fire on a battlefield.

A house is found ablaze and full of bodies, and a fleeing horse is also seen on fire. A woman intentionally crushes her hand in a cotton gin; and while we don’t see the end result, we are treated to a splattering of blood. A man is found hanged, a sign around his neck reading “deserter.” A pig carcass is seen being cleaned out.

A man drinks wine. A couple of people smoke pipes.

Obviously, racism plays a massive role in the film, and many people express racist views. Black people are further dehumanized not only through slavery but also by how many characters in the story refer to them not as people but as “it.”

“Suiting the action to the word, he pulled down the pile of dirty rags that half concealed his back, and which was once a shirt, and exhibited his mutilated sable form to the crowd of officers and others present in the office. It sent a thrill of horror to every white person present, but the few Blacks who were waiting for passes, both men, women and children, paid but little attention to the sad spectacle, such terrible scenes being painfully familiar to them all.”

So reads an 1863 clipping from the New-York Tribune regarding “Whipped Peter.” The graphic photo of his back exposed the harsh realities of slavery to the general public in the North, who, though they had heard stories of its brutality, had largely not seen its effect themselves.

Emancipation tells the story of Peter’s escape to Union-controlled Baton Rouge in pursuit of freedom. Just as photographers did not shield the nation from the wounds on Peter’s back, so too does Emancipation refuse to hide the brutality of slavery and the Civil War from its viewers. We’ll become accustomed to seeing not a few severed limbs, bleeding bodies and awful beatings. We’ll hear racist and disparaging language, too.

The gritty, bloody action that pervades Emancipation’s monochrome screen can, at times, feel a bit gratuitous. That said, some could argue that such depictions prove the cruelty of slavery that the film attempts to capture.

But what was more evident was Peter’s unshaking Christian faith. As Will Smith’s character flees through the swamp to freedom, it’s his belief that continuously gives him the strength to keep pushing forward. And though there are a few Confederates who try to twist Christianity to support their cruel venture, there are many others who cling to it in the fight against slavery, Peter included. It’s evident throughout the movie that God’s hand protects and guides him at various moments, too.

Those living on or near the plantations know just how cruel the conditions and treatment could be. And when the photograph of Peter’s back goes North, the rest of the nation will know, too.

Emancipation is a wincingly painful watch, filled as it is the degradation and cruelty of slavery. But for viewers willing to wade through the painful imagery inherent in this story, it nevertheless tells an important story—one that testifies to hope and truth amid unthinkable horror.