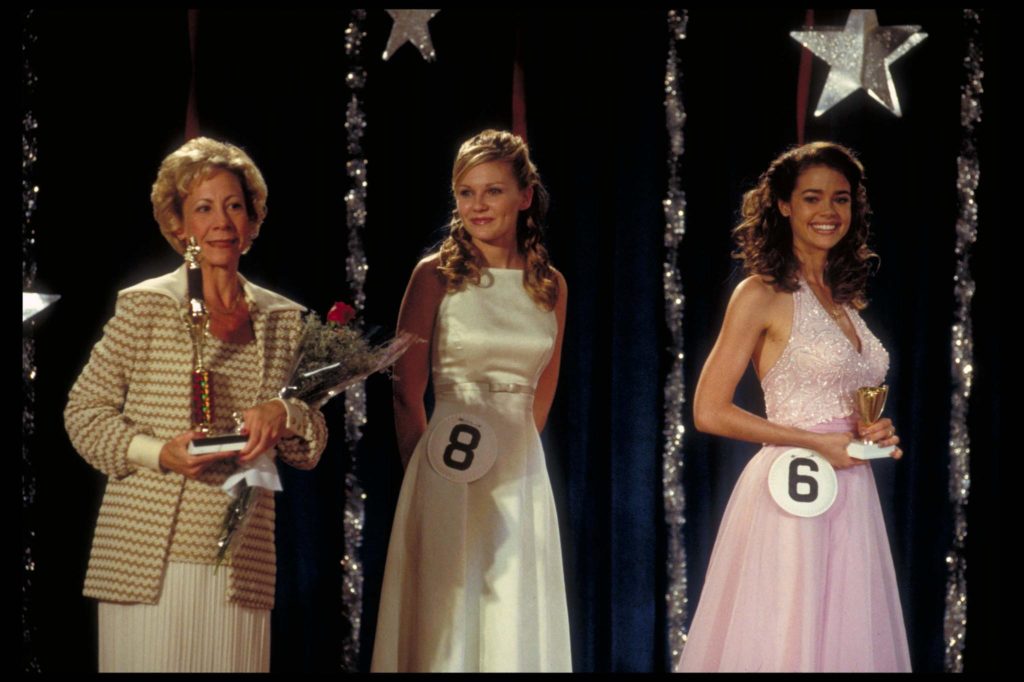 Mount Rose, Minnesota: The location of the annual Sarah Rose Cosmetics American Teen Princess Pageant. The stage for this fictitious “documentary.” Amidst the rolling hills of this rural community a harshly stereotyped group of 17-year-old girls step forward to compete for the coveted title. There’s the “loose” cheerleader. The aspiring thespian. The captain-of-everything overachiever. The spoiled-rotten bomb shell (whose mom just so happens to be running the pageant). And the adorable underdog who lives in a trailer park and holds down two after-school jobs just to stay afloat. This dark comedy provides viewers with the “behind the scenes” drama of pageant life—leaving very little to the imagination.

Positive Elements: Amber Atkins is a sweet girl. Although a bit aloof at times, she strives to work hard, obey her mother and care for those around her. And while her rivals certainly have their share of quirks, several of them seem to be decent individuals, rather than self-absorbed snobs.

Spiritual Content: Christianity is mocked throughout the film. Many characters speak plainly about their “religion” yet are quick to speak and act in an incredibly hypocritical manner—discrediting the possibility of a real and genuine faith. The Lord’s name is used in vain more than a dozen times. During the talent portion of the pageant, Rebecca Leeman sings a monotone version of the song, “Can’t Take My Eyes Off You.” Halfway through the number, the audience is still wondering who her beloved is. Then, entering from stage left, a stuffed Christ-doll nailed to the cross rolls in on wheels. She whirls her “lover” around the stage for the remainder of her performance. Rebecca is also a member of the “Lutheran Sisterhood Armed Society” and proudly flashes her weaponry and agendas throughout the film. One scene finds a Lutheran minister staggering across the street, apparently drunk off the communion wine.

Sexual Content: One of the judges for the pageant is portrayed as a typical “dirty old man” who spends more time lusting after than judging the young girls. One scene finds the cheerleader’s boyfriend tackling her in order to make out. Later, it is insinuated that she might be pregnant. During the interview process, another judge’s retarded brother is found with his pants down. One girl lands on a ladder while performing the physical fitness portion of the competition. The next scene shows her placing ice between her legs. Amber’s mom’s friend tends to be on the crass side and often approaches men in a sexual manner. A lot of cleavage is revealed and a girl is shown in her underwear once.

Violent Content: One of Amber’s after-school jobs is putting makeup on cadavers at the local morgue. She seems unfazed by the whole thing. Nevertheless, audiences must endure this backdrop in more than one scene. While this may seem strange, there are actually three deaths in the film—two of which are murders. After being identified as a real threat to Rebecca’s almost-sealed victory, one girl is killed when her tractor explodes with her on it. When the captain of the football team takes an interest in Amber instead of Rebecca, he is shot between the eyes. Amber’s mom is also involved in a horrible accident in their trailer. Her hand is severely burned (which is graphically depicted) and it ultimately has to be amputated. Yet another girl is knocked out and looses her hearing after a light “mistakenly” fell on the stage during dress rehearsal.

Crude or Profane Language: Excessive profanity for a PG-13 film. The f-word and s-word are used about 10 times. Other vulgarities blare throughout.

Drug and Alcohol Content: Everybody smokes—always! Alcohol is both used and abused in more than a handful of scenes. The judge’s retarded brother is seen inhaling paint. Several times, pregnant teens are seen smoking and drinking.

Other Negative Elements: In an attempt to portray the ugly side of pageantry, the film devotes an entire subplot to the reigning American Teen Princess—a sickly blond teen who resides in an anorexic ward of the hospital. In an attempt to garner laughs, this gaunt young women looses her hair, is handed a box of chocolates by Rebecca and is paraded across the pageant stage in a wheel chair by a candy striper—apparently completely clueless to the fact of how ill she really is. She is later escorted back to her ward in an ambulance. Not funny. The film tries very hard to gross out audiences on more than one occasion. During one pageant, the contestants are fed shell fish—only to discover that it’s bad. One by one, girls begin vomiting all over the stage and each other. Homosexuals and transvestites are discussed.

Summary: Few would argue that the at-times excessive world of pageantry doesn’t occasionally raise the eyebrows of sincerely concerned individuals. The pressure. The expectations. The politics. The cut-throat mentalities. But instead of responsibly tackling this touchy subject, Drop Dead Gorgeous opts to insult Christianity, mock the innocent, make light of violent acts and laugh at risky behavior.