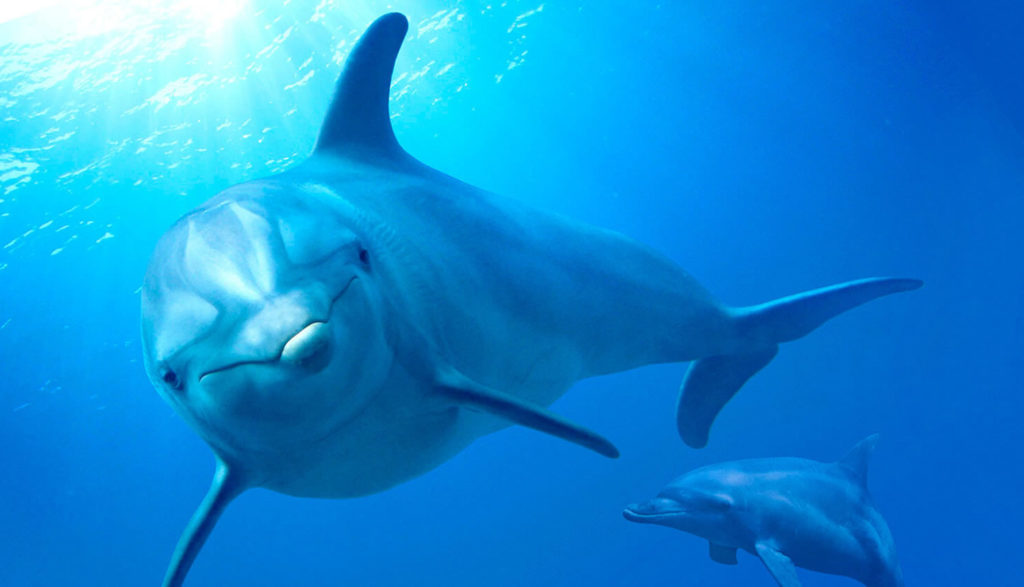 Sometimes we love the beautiful, wild animals in the world around us—but they don’t love us back. In fact, that’s true much of the time. But not in a Disneynature film. These wonderful little docu-pics are designed specifically to give mom, dad, and the kids a warm and friendly view of our beasty friends: an anthropomorphized story with dramatic highs and lows.

And, frankly, that’s OK. For as we sidle up to 2020’s Earth Day, while generally being chained to the couch, it’s pretty sweet to gather the kids and be gently reminded that there’s still a great big magnificent world out there.

A world for us to enjoy and protect.

Narrated by Natalie Portman, Disneynature’s Dolphin Reef tells us the stories of residents swimming about in the Pacific waters surrounding the Polynesian islands. Theirs’ is a marvelous world of colorful coral reef, millions of swirling inhabitants of every size, and lightly undulating plants and waves.

And even though the film focuses primarily on a young dolphin named Echo—an easily distracted youngster who’s not yet “getting” the lessons his mom is trying to teach him—there’s a pretty large supporting cast of razor fish, sea turtles, parrotfish, stingrays, sharks and whales to learn about, too.

Each story and each little peek at underwater life is woven together with humor or light peril to keep younger sea lovers planted in their seats. There will be giggles over a grumpy “housecleaning” creature called a mantis shrimp, for instance. And then tense gasps over that odd little guy’s showdown with a predatory cuttlefish whose skin pulses with a mesmerizing florescent strobe.

As you would expect, we see some orcas and reef sharks that follow their predatory natures here. Hey, it’s pointed out that even our sweet little dolphin pals fall into that predatory class. (But they’re more happy predators.) And there are some (nameless) fish that get bloodlessly gobbled, to be sure. But each sharp-toothed, jaw-snapping story (and Orca whale-thumping narrative ) ultimately concludes with a happy ending. (And yes, even grumpy Mr. Mantis gets a last-second save.)

The closest thing we get to toilet humor here comes courtesy of the bumphead parrot fish, a useful seagoer that chomps up dead algae-covered coral and then dumps out something called “sand poop.” But the fact that this industrious guy can produce more than five tons of new sand a year makes that concept more note-worthy than giggle-worthy.

And that’s really the true joy of this underwater film: It has so much to gently teach us. Dolphin Reef ably weaves together made-up fish tales to give us a very nice understanding of how a coral reef ecosystem works: There are millions of creatures in the mix, each with its own role to play in maintaining the health of the reef.

By film’s end, that fact is as clear as the gorgeous Pacific waters the filmmaker’s cameras glide through. And this pic makes it equally clear that we have a part to play in keeping those waters clean and healthy, too.

“Their world is our world,” Ms. Portman reports. And that’s a warm and friendly Disneynaturereality we all can embrace.