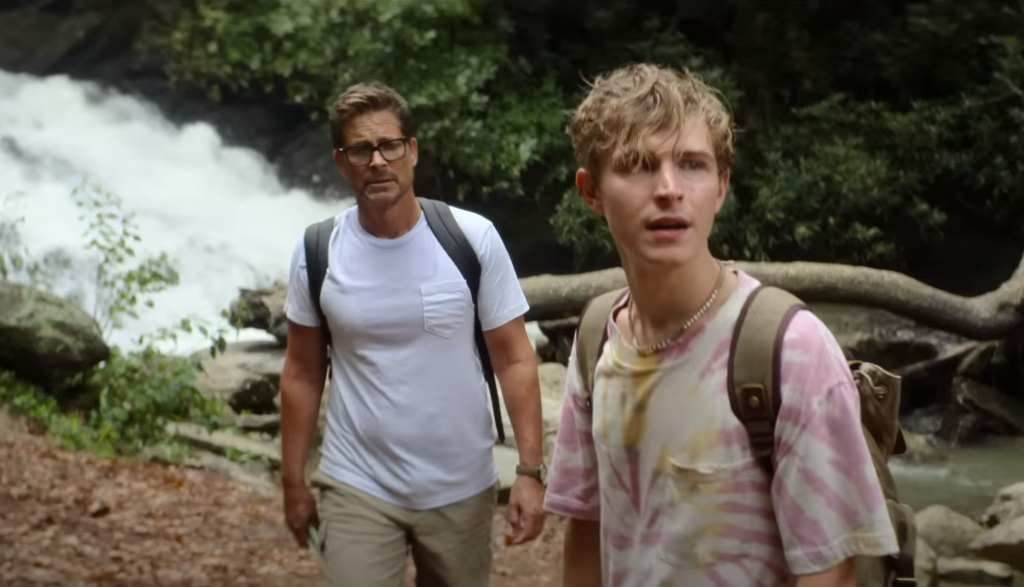 College is a time when your life can utterly change. And Fielding Marshall discovers that the hard way.

It’s his senior year, and Fielding’s college girlfriend suddenly breaks up with him, leaving him to wallow in grief alone. So he makes a spur of the moment decision: He’s going to adopt man’s best friend to help overcome his broken heart. And he finds the perfect match: a cute little yellow lab that gonks him on the head the moment he brings it home. And thus, Gonker join his family.

But that’s not the only change happening in Fielding’s life. Soon, he graduates—and the real world rears its ugly face. Fielding is the only one of his friends without a job lined up. To make matters worse, he overslept his own graduation ceremony.

That’s all evidence to Fielding’s father that his boy might not be taking this whole job thing seriously. But his dad’s constant reminders to that effect are driving a wedge between the two. Frustrated, Fielding takes to the Appalachian Trail to talk out his problems with a friend.

That’s when Gonker spots a fox off in the distance and takes off after it.

The dog doesn’t come back.

Fielding is devastated, and he runs to his parents to ask for their help. His mother sets off contacting everyone she can think of, and his father decides to hike the Trail with him, using all the tips and tricks they can to get Gonker back (and giving them plenty of time to hash out their differences).

But they need to hurry; Gonker has a condition called Addison’s disease. If he doesn’t get his monthly shot of medicine within the next 20 days, he’ll likely die.

Yes, Dog Gone tells the story of a family desperately looking for their lost pup. But it also shows us how this difficult situation paved the way for a father and son to rebuild their strained relationship. Throughout the course of the search, the two learn from each another, with both realizing that they’ve harbored unfair misconceptions about the other. And on that point, it’s refreshing to see a film that doesn’t paint one character or the other as “the bad guy” who alone needs to change for reconciliation to succeed; both Fielding and his dad, John, have made mistakes, and they both need to own up to them.

We learn that Fielding isn’t lazy or unmotivated; he wants to get a job, but he just hasn’t quite figured out what he wants to do with his life. Meanwhile, John isn’t strict or unloving, either; he just wants his son to be able to keep himself afloat. In a conversation with another young man who wonders if his dad’s love is conditional on him getting a job, John says, “He loves you. Writing your plays, and making your music isn’t gonna pay the bills, you know. Or get you health care coverage. So he worries. That’s what dads do, they—we—worry.”

We also watch as countless concerned people assist in the search for Gonker—even people from across the globe! From tips phoned in to news articles written about the search, people become motivated to help the family, including a group of dangerous-looking bikers who help Fielding learn to not judge people purely on appearance.

At the center of the search are, of course, Fielding’s parents. His mother runs a makeshift base of operations, contacting “places where people gather” and looking for leads on Gonker’s whereabouts. Fielding’s father, meanwhile, drives his son across the state and hikes the trail with him.

Finally, Fielding learns to forgive himself for losing Gonker. A biker informs Fielding that grief and guilt can eat people up. Lest Fielding be plagued with it for years, the man counsels, he needs to exonerate himself.

A man sells various depictions of Jesus, priests and monks out of a shopping cart. He approaches Fielding and John and tells them that if Fielding wants to find his dog, he’ll “need to find Him.” The man asks Fielding if he’s found Jesus Christ, and John responds that they are members of a church but don’t go as often as they should.

The vendor pulls out a depiction of Saint Anthony, calling him the “patron saint of lost souls” and suggesting that the saint will “help bring Gonker’s soul back to you.” The man then proceeds to pray to the saint. And when Gonker takes a long time to decide on a stick for fetch, John remarks that “they choose popes quicker.”

Fielding’s friend Nate discusses his recent breakup, and he quotes Mother Teresa. Nate also ponders why no one probably ever broke up with Mother Teresa: “You dump her, that is one-way ticket downstairs,” he theorizes.

Fielding and other college students practice yoga; Fielding practices another Hindu spiritual practice, a breathing exercise called Agni Prasana. While helping teach a philosophy course, Nate poses the question “Is atheism a religion?” on a test. Someone is called a “godsend.”

Fielding and John are both very briefly seen in shirts and boxers, though nothing is shown. Women are seen wearing sports bras or low-cut shirts. A man takes his shirt off, and someone refers to him as “Adonis,” a reference to a man in a Greek myth revered for his beauty.

Someone vomits a small amount of blood into a toilet. Fielding pushes his body to the limit while trying to find his dog, resulting in his feet bleeding from ruptured blisters; we briefly see the red stains on his socks. We hear a reference to another dog that was hit by a car and killed.

Two inebriated men try to pick a fight with Fielding, resulting in John interceding to threaten the men. John tells them that he will jam his thumb so far up their eye sockets that “it could pop [the eye] out like a cork,” causing the men to back down.

There are a few instances of college students drinking beer at a party or hangout. When Fielding’s parents drive up, he tells his friends to hide the beer, prompting them to respond that they’re all 21—though Fielding’s more concerned about how early in the morning it is for drinking. One of Fielding’s friends references a job she’s gotten with brewing company Anheuser-Busch. We see a “beer bong” on the floor of a home. People drink wine. Two men in a bar are inebriated.

John makes snide comments to other people regarding Fielding’s unemployment. A dog is seen left out in the cold. Flashbacks show Fielding’s mother’s unresolved trauma brought on by her parents’ treatment regarding the family dog. When the dog dies (offscreen), her parents discourage her from crying about it, even bribing her with a day of shopping if she doesn’t make a big deal about it. On a couple of occasions, John sneaks a dog into a building that doesn’t allow for it. Gonker urinates on Nate while sitting on him in the car, and the gag goes on for half a minute.

Oh no, you think. Not another movie about a dog. I’m not strong enough for it. I still haven’t recovered from Marley & Me.

Well, not to worry, because Dog Gone is based on a real story—a  far-reaching one that [spoiler warning] the dog survives. But Gonker’s ultimate fate isn’t really the point of the film. Actually, Dog Gone is about familial reconciliation.

When Gonker goes missing, Fielding and his father have to work together in order to find the yellow lab. The time they spend searching the expansive Appalachian Mountains allows the two space to reconcile their strained relationship.

“When you care about someone, it can’t just be sometimes or playtimes,” Fielding’s father says. “It has to be all the time.” And though those words refer to Fielding’s relationship with Gonker, the film demonstrates how they’re especially true of our families, too.

Of course, that’s not to say that the TV-PG film doesn’t have some bite. Some mild profanity creeps in, and we hear more than a dozen misuses of God’s name. That content will likely give parents of the youngest potential viewers pause.  that’s definitely something with which make viewers will take pause.

But ultimately, Dog Gone tells a story of not just a man’s connection with his dog but also the value of familial connection, too. So is this a treat you’d do a trick for? Maybe not quite. But it might just cause a tail wag or two.