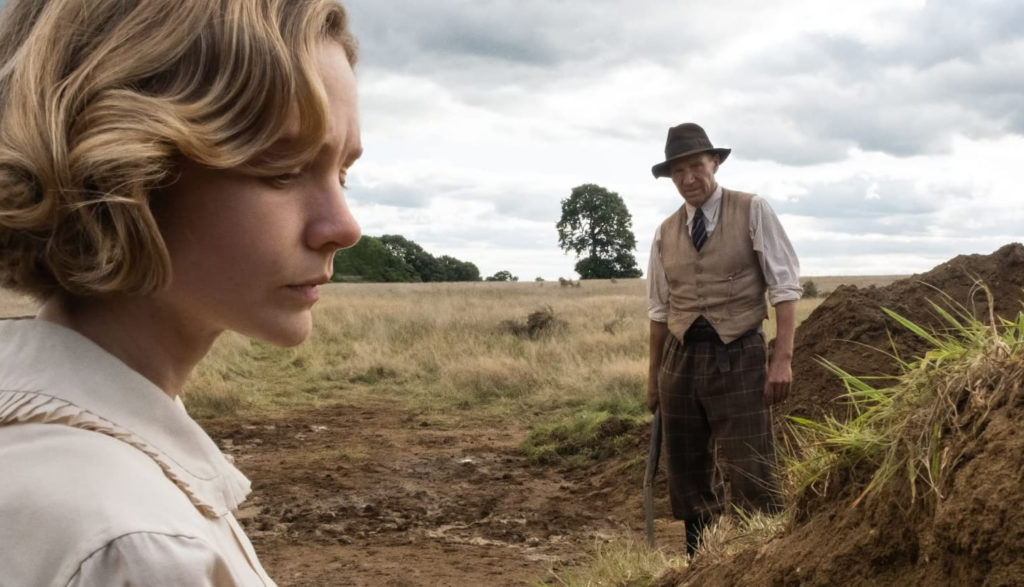 The Sutton Hoo Treasure was discovered in 1939 in Suffolk, England. The owner of the land where it was found, Edith Pretty, had long been interested in excavating what she believed to be burial mounds on the lot. However, after the death of her husband, she put off the project in order to grieve and focus on raising her son.

When she finally was able to revisit the mounds, the country was preparing for war. Thus, neither the British Museum nor the local Ipswich Museum were willing to send one of their experienced archaeologists to a site that might not even have anything valuable to find.

But Mrs. Pretty had a feeling. So she hired Basil Brown, an excavator, to take on the project.

Mr. Brown had worked with the Ipswich Museum on several digs before. But they didn’t take his work seriously, since he hadn’t been formally trained. However, Mr. Brown had been working on digs since he was old enough to hold a trowel. His father, like his grandfather before him, had taught him so much about soil that you could show him dirt from anywhere in Suffolk, and he could identify whose land it came from.

In the end, the work of this “untrained,” self-taught archaeologist wound up uncovering what is still considered the greatest buried treasure ever unearthed in the United Kingdom.

There is contention throughout the film between Mr. Brown, Mrs. Pretty, and professionals from the museum. At first, the museum tries to bully Brown into abandoning Pretty’s project to help them on a Roman villa. But Pretty defends Brown, stating that it is his choice whom he works for. When the museum later realizes that Brown has discovered something valuable on Pretty’s lot, they try to remove him from the project since he isn’t “qualified. But Pretty stands up for him again, calling them out for their “snobbery” and insisting that Brown be given credit for discovery of the treasure.

Despite these efforts, the constant battle with the museum discourages Brown. However, his wife, May, reminds him that he never dug for the money or the glory; he always did it because he was good at it, and because he believed that learning about the past would teach future generations where they came from. This reminder sticks with him. Later on, when Pretty expresses her fear of dying, Brown tells her that their excavation proves that even in death, some part of us lives on to help teach those who come after—that a grave isn’t death but rather “life revealed.”

When Robert, Pretty’s son, learns that his mother’s “heartburn” is actually a fatal heart condition, he tells Brown that he feels like a failure for not being able to help her. But Brown tells him that it isn’t his fault, because some things are just beyond our control. He also encourages Robert to be strong for his mother in the days to come.

A woman references Mark 12, where Jesus tells his disciples, “Render unto Caesar the things that are Caesar’s.” She also wears a coin from that time period as a necklace, stating that she wears it for luck because of that passage. Someone else talks about Noah’s Ark.

Someone says that a partially eclipsed moon makes it seem as if “the gods are angry.” Mrs. Pretty mentions a local superstition that says if girls lie down on the mounds, they’ll become fertile. She also makes a few references to spiritualism, such as asking Brown if he saw any spirits when he nearly died.

Someone asks, “How the devil are you?”

It is strongly implied throughout the film that a married man is actually gay (and this culminates when he goes into an inn room with another man). In addition, his wife falls in love with another man and nearly kisses him. She ends things with her husband before pursuing her other interest further, but they are still technically married when both go off with other men at the end.

A couple has sex, and we see a lot of skin (though nothing critical is shown). Several couples kiss throughout the movie. A couple of women also sit in men’s laps and embrace them.

A woman takes a bath (though, again, we don’t see anything critical). Later she removes her robe, and we see her bare back. A shirtless man digs a hole. A woman wears several midriff-baring tops.

Throughout the film, we see impending signs of war—pubs boarding up their windows, soldiers riding buses and sandbags being stacked against national monuments to protect them. And when it is announced that England is officially at war with Germany, many people are frightened.

One of the burial mounds collapses on top of Mr. Brown, and he nearly dies from suffocation. There are several tense moments as people dig him out of the dirt, remove it from his mouth and nostrils and perform CPR.

A plane crashes into a river, killing the pilot. We hear that a woman’s father drowned. Mrs. Pretty gets upset when her cousin joins the Royal Air Force, since she believes it’s a sure way for him to die. A little boy pretends to fire toy guns.

A woman distracts a young boy so he won’t see a dead body.

Characters smoke pipes and cigarettes. People drink at a pub. Sherry is served at a party. Someone says that a man is a heavy drinker.

The people who work for the British and Ipswich museums are rude and condescending to Mr. Brown and Mrs. Pretty. They threaten Brown’s job, challenge Pretty’s claim to the treasure and later pressure her to donate it after an inquest declares her to be the true owner.

One of their archaeologists also insults a young woman, saying that he hired her to help on the dig not because of her expertise (as she previously believed) but because of her small size (since the man in question was overweight and could potentially damage the excavation site if he stood in it).

Children throw balls at a man’s vehicle as he drives through London making announcements about the war on a loudspeaker. A man gets cross with his wife after she failed to wake him up, making him appear to be late to work.

Although the Sutton Hoo treasure has been on display at the British museum since the end of World War II, it didn’t give credit to the man responsible for the dig, Basil Brown, until quite recently.

In spite of Mrs. Pretty’s constant adulations of Mr. Brown’s work, the museum didn’t want to recognize an amateur. They ignored the fact that he correctly identified the treasure as being from the Anglo-Saxon period—which largely contributed to the world’s knowledge of that historical time period. They couldn’t have cared less that he nearly died during the excavation when one of the walls caved in. And, when it was time to pack up and go home, it didn’t matter that he was the one who ensured the site was properly preserved so that future archaeologists could revisit and excavate further.

None of that mattered because when it was all said and done, Basil Brown was still self-taught and didn’t have a professional degree.

But The Dig has a few more controversies buried within than who discovered the treasure at the center of the story. Two people who help on the excavation have an affair because it becomes apparent that the woman’s husband is interested in men, and we do see some skin when they connect. Language, while infrequent and mild, is still present at times. And there are some intense moments both during the cave-in that nearly kills Brown and later on when a Royal Air Force pilot is killed in a plane crash.

As this film shows us, the British Museum has apparently learned a bit about preserving history, since Basil Brown’s name now appears next to Edith Pretty’s for the discovery of the Sutton Hoo treasure. But viewers may have to dig through some tough content to learn the same historical lesson.