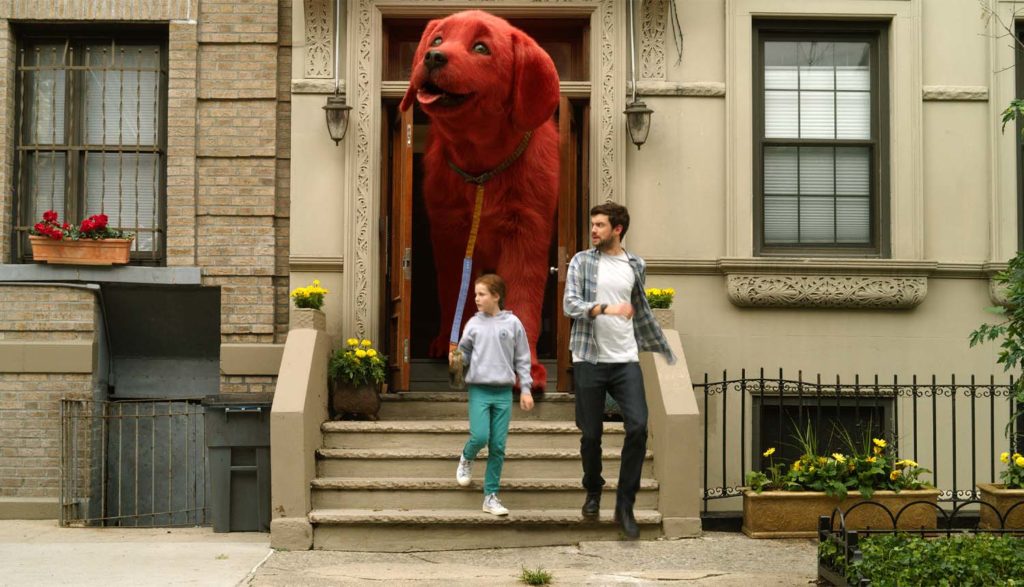 When you’re at a new school with no friends and your mom is constantly gone away on business trips, life can get a little lonely. Especially when life at school is kinda tough, too.

Emily Elizabeth doesn’t want to be popular or the center of attention. In fact, she’d rather nobody noticed her at all. Because at least then the school bully wouldn’t single her out for humiliation.

Her mom tells her that she’s special. She tells Emily that the unique ones are the ones who rule the world someday.

But it’s not someday. It’s today. And Emily doesn’t want to be brave like her mom. She just wants a way to get through the school year without crying herself to sleep each night.

Luckily for her, Emily’ introduced to a fellow outcast in the form of a small, fire-hydrant-red puppy. Emily names him Clifford, and the two are instant friends.

But their jubilation at finding each other is short-lived. That’s because the morning after receiving Clifford, Emily wakes to find he’s grown 10 feet overnight! Her little red puppy is now … a big red dog.

Now, Lyfegro (a genetics company specializing in growing giant food) wants the giant canine to help with their research. Emily, of course, isn’t going to turn Clifford over to a life of being poked and prodded by scientists.

But if she really wants to protect Clifford, she might not be able to keep him.

Emily’s uncle, Casey, is left in charge of her while her mom goes away on business. In previous visits, he’s accidentally left Emily in various places (and even gambled her away once). Emily, in turn, is rude to her uncle. She also takes advantage of his irresponsible behavior, manipulating him into doing what she wants even when she knows it’s wrong.

None of that is positive, of course. But after a rocky start, Casey becomes determined to do better. He admits that he feels like a failure and has let his older sister (Emily’s mom) down. He notes that his sister sacrificed everything for him, giving up a scholarship to a prestigious school in order to help raise him. He proves himself by helping his niece save Clifford from Lyfegro and encouraging her to do the right thing even when it’s hard.

Emily learns a valuable lesson about sacrifice through Casey. Because even though she loves Clifford, she realizes she can’t protect him adequately. [Spoiler Warning] She conquers her fear of being alone again in order to save him. And she sends him to live on an exotic animal preserve in China.

In the process, she realizes that she’s not alone after all. Her neighbors and a boy from her school have all come to love Clifford, not just because he’s a cool dog but because they all love Emily, too.

And when Emily’s later put on the spot to speak in Clifford’s defense, she bravely stands up for the dog, reminding people (including adults) that just because someone or something is different, doesn’t make it dangerous or freakish.

Emily’s mom is proud of her daughter’s boldness. And she’s also grateful to Casey for helping Emily on this path.

A character named Mr. Bridwell opens the film by stating that “magic is all around us if you know where to look.” And there’s certainly something magical about the old man.

People say he’s like a wizard, showing up right when you need him. His menagerie (which is somehow bigger on the inside than it is on the outside) hosts a variety of strange creatures like Clifford. We hear about how a parakeet repeated positive affirmations to its mute owner until the man could speak. And a spider monkey massaged the feet of its lame master until she was up and running around again.

Emily is told that how big Clifford gets depends on how much she loves him. And considering he grows ten feet overnight, it’s safe to say she loves him a lot.

We hear about praying and miracles. Someone says, “Can I get an amen?” Someone says “Ishmael” is a name from the Bible. Someone guesses that an “Indian burial ground” might be responsible for Clifford’s growth.

It is implied that Casey lived with his ex-girlfriend. Before a job interview, a man who hasn’t showered pulls the waistband of his pants away from his body to examine himself. We see a man in a t-shirt and underwear.

Clifford’s size causes a lot of problems. He accidentally destroys most of the furniture in Emily’s apartment just by walking around it. More than once, adults get tossed across rooms by Clifford’s wagging tail. And a man in a human-sized, inflated hamster ball is kicked around the park when Clifford mistakenly thinks it’s a toy.

Casey and Emily’s neighbors get into fights with guards from Lyfegro. Some people are injured when the animals being experimented upon are released from Lyfegro’s labs.

A man falls off a roof while fixing a satellite, but Clifford catches him, saving his life.

Emily jokes about a magician who wants to cut an irritating woman in half. A man with a prosthetic hand says he lost the appendage to a deli meat slicer. A small dog is temporarily swallowed by Clifford, but he spits the tiny pooch out unharmed.

We hear the British expletives “bloody” and “bollocks.” There is a single misuse of God’s name. We also hear incomplete uses of “What the—?” and “Kiss my—!” Someone exclaims “holy cow” and “holy sheep!” We hear the term “jeez.”

Lyfegro’s mission statement is to feed the world by growing enormous food. However, it’s also a corrupt organization. Various employees plot to falsely claim ownership of Clifford by injecting him with a microchip stating he belongs to them. And when company representatives tell the press and police this lie, people believe them.

Emily gets bullied by her rich classmates, who nickname her “food stamp” since she attends the private school on a scholarship. When her school has a recycling fundraiser, they mock her for actually recycling instead of having her mom write a check (as their parents have done). And when her bag of recyclable cans rips, they film it, posting the video online with some cruel comments.

Emily’s landlord has strict rules prohibiting pets. Because of this, she and Casey lie and go to extreme lengths to prevent the man from discovering Clifford. When the landlord eventually does find out, he evicts them and locks them out of their apartment before they can retrieve their things.

Clifford is accidentally left behind when the pound comes to collect his mother and siblings from the warehouse where they live. Afterwards, he wanders into the city and is nearly run over by a car before Mr. Bridwell rescues him.

There’s quite a bit of toilet humor revolving around Clifford’s natural bodily functions. He urinates on a tree and Casey remarks about how bad “Number 2” will be. Clifford flatulates, gassing out the vehicle he’s hiding in. His slobber covers several people. He licks himself, and a fellow dog is lifted to sniff Clifford’s butt (normal dog behaviors, of course, but also an intentional movie-making choice here).

At the animal hospital, the vet argues with Casey over who will administer the rectal thermometer.

A landlord refuses to fix things without bribes. A girl says she lost her sense of humor on the subway. People lie and steal. Kids are mean to each other. Two people high-five when they learn someone isn’t dead before realizing that someone else is. A man says he hates children. A scared boy says he can’t get his backside to unclench.

Much like the children’s books it’s based on, Clifford: The Big Red Dog contains a lot of good messages.

Emily learns that just because she’s different doesn’t mean she’s a freak. Likewise, her new dog, Clifford, while large and red, acts just like every other dog.

Moreover, they aren’t alone. Neighbors and classmates, whom Emily previously thought disliked her, turn up to help her and Clifford escape Lyfegro. All Emily really had to do was be brave, be bold and be herself.

Throughout her adventure with Clifford, Emily also learns that her Uncle Casey isn’t as hopeless as she’d previously thought. While he’s certainly made mistakes in his life, Casey tries hard to be there for his niece when she needs him most. And simply by being there for Emily, Casey also proves that he can be a dependable caretaker to his sister.

And finally, Emily learns what it means to make sacrifices for the ones you love.

Along the way, there’s some toilet humor in play and a few impolite phrases that younger children might be prone to repeating. But otherwise, the Clifford movie is as delightful as Norman Bridwell’s original books.