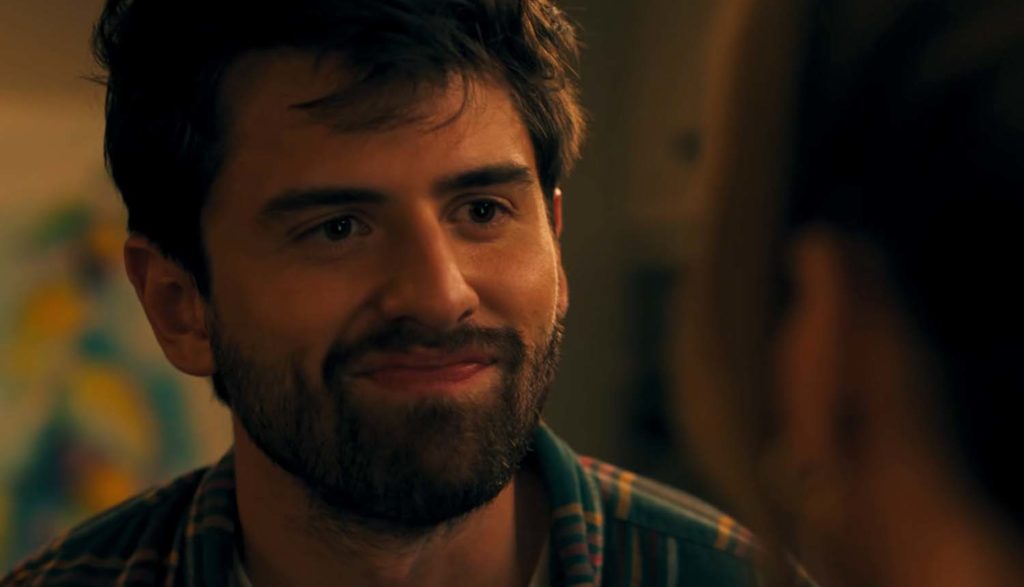 Graduating from college can be a difficult time. Some people already have jobs or further education lined up. Some choose to get married and start a family. And some are still just trying to figure out what they want to do with their lives.

Andrew falls into that third category.

His original plan was to follow his girlfriend, Maya, to Spain where she was continuing her education. But since he didn’t have a plan on how to fulfill that plan—not to mention a plan of what he would do once he got there—it fell through.

Instead, he wound up back home, sharing a room with his 13-year-old brother David and working at fast food place in the mall called Meat Sticks.

Andrew hates it, but since it’s only until he can save up enough money to join Maya in Barcelona, he suffers through.

But then he’s offered a gig as a “party starter.” And his whole trajectory begins to change.

It began by attending a Bat Mitzvah with David. Andrew finds he has a knack for getting people out on the dance floor and ensuring everyone has a good time. Pretty soon, all the Jewish moms are hiring him to entertain at their kids’ parties. But perhaps most impressed is “crazy mom” Domino.

Domino didn’t think Andrew would be able to get her autistic daughter, Lola (who is a little older than her classmates and is socially sensitive), out on the dance floor. But when he did, she asked him to become Lola’s sitter.

Domino is a bit of a mess herself, having gotten married, pregnant and divorced quite young. Most of the moms at Lola’s school think Domino sleeps around. But Andrew doesn’t care. The more he hangs out with her and Lola, the more he wants to be a permanent fixture in their lives. And while it seems that Domino wants the same, she’s also engaged. And she’s unwilling to break that off.

Which brings Andrew to ask himself some very important questions about what he really wants to do with his life. Does he want to still keep his original plan in place and head to Barcelona and Maya? Or stay with Domino and Lola, despite the complications?

Andrew is great with kids in general, and Lola in particular. Rather than treat her like an infant (as she indicates many have done before), he asks her questions about what she would like to do and how she would like to do it. (Recognizing that social interactions drain her, he inquires if she would like him to stop talking and be alone for a bit.) He also looks out for her, defending her against bullies. (David and his friend stop these same bullies themselves later on.)

Andrew also forms a special bond with David. And while not all of his advice to David is great, it’s good to see the brothers bond despite their age difference. David aids Andrew as well, helping him to accept their new stepdad, Greg.

The boys (especially Andrew) are sometimes rude to Greg. But they realize that Greg is good for their mom, who suffers from bipolar disorder, and makes her happy. And after Greg defends their mom publicly, they form a newfound respect for the man and begin to trust him.

Domino states that she’s not a good person (more on that in later sections), but she seems to be a good mom to Lola. She says that she suffers from depression but that having Lola made things better for her. And while she still struggles with her own doubts and insecurities, she comes through for her daughter, prioritizing Lola’s needs over her own.

At times, Andrew acts very immaturely. (Some conversations with his mom about love remind me of a comedian’s imitation of middle school boys.) But he slowly starts to make better decisions for himself. He applies for jobs in the field he studied in college. He apologizes for his mistakes. He has a serious conversation with his mom about how much he appreciates what she did for him growing up. And he even apologizes to Joseph, Domino’s fiancé, for interfering in their family. [Spoiler warning] Joseph forgives Andrew, indicating that if he didn’t know explicitly about Andrew’s feelings for Domino, he at least guessed as much. And Joseph thanks Andrew for looking out for the girls.

In a flashback, when Andrew’s a teenager, his mom comforts him after his first heartbreak. And when he grows up, she continues to look after him, making sure that he is making decisions (like traveling to Spain) for himself and not for someone else. Later, others encourage him to do the same, pointing out that once you get married or have children, all your decisions affect them as well.

Andrew attends many bar and bat mitzvahs, and we see bits and pieces of the religious ceremonies. However, Andrew’s family is not Jewish themselves, even stating that they envy Judaism at times. Andrew states that he believes everyone has multiple soulmates.

Andrew has sex with Macy, a girl he attended high school with (we only see their faces and tops of their shoulders). Afterward, he removes a condom under the sheets and throws it away.

Domino cheats on Joseph several times with Andrew. The first time she kisses him (after climbing into his lap), he rejects her because it seems like she doesn’t really want to kiss him. The next time, they make out but are interrupted when Joseph returns from a business trip early (though they aren’t caught). Eventually, Domino calls things off with Andrew permanently, stating that she does want to marry Joseph, even though her actions would indicate otherwise. [Spoiler Warning] And we eventually see her go through with the wedding, seeming genuinely happy.

Sadly, Domino suffers a miscarriage while attending a bat mitzvah. She asks Andrew not to tell anyone because she fears the rumors that would spread about her. One woman had already accused her of having sex with her husband and another of sleeping with the school principal. That, combined with the fact that Joseph didn’t know she was pregnant, would only make her look bad.

When Andrew tells David that girls and guys like good dancers, David asks why Andrew thinks he’s gay. Andrew responds that he doesn’t, he just doesn’t think David should make that decision until he’s older. Later, Andrew offers David advice about how to have his first kiss, emphasizing the importance of making the girl comfortable. When David tells Andrew after the kiss happens, Andrew checks to make sure that David didn’t have regrets, realizing that he forgot to impart that consent and enjoyment is important for both parties.

A couple kisses. A few women wear revealing outfits. People dance closely together at clubs and parties. Andrew plays the inappropriate song “WAP” (which talks crudely about female anatomy and sex) at a kid’s party, joking that the rabbi requested it. Andrew spanks David lightly in a “go get ‘em” manner. Andrew gets jealous when he sees pictures of his ex with a new boyfriend. Two women, left by their husbands, eventually remarry other men. When a teen boy asks an adult woman out on a date, she gently turns him down.

Several teen boys tease and shove Lola. David and his friend jump in to stop them, starting a fight in the process. When Andrew goes to break the fight up, Andrew’s mom and the bully’s father (who had a previous verbal confrontation with Andrew) step in as well. The father swings at Andrew and misses, giving his mom a black eye instead. Greg then clocks the guy, knocking him unconscious and ending the altercation.

When Domino has her miscarriage, Andrew finds her in a bathroom stall, bleeding heavily. A man cuts his arm on glass when he falls over.

People drink throughout the film and some become drunk. A woman says she wants a cigarette but won’t since she quit smoking. A pregnant woman (who may not have known she was pregnant) drinks at a party. It’s rumored that Domino smokes crack cocaine. Andrew jokes about breaking into Greg’s liquor cabinet with David.

Andrew often drinks vodka from a water bottle while working as a party starter. He gets caught at least twice when this happens, and his mom has to cover for him. When Andrew wants to drive while intoxicated, Greg tries to stop him. He ignores Greg and leaves anyway. But later, he realizes that he is too inebriated to drive, parks his car and calls his mom to pick him up.

Lola is bullied by a group of boys in her class for being older (she was held back) and for having autism. We learn these boys also bully other children and that their parents do nothing about the bad behavior.

We hear about two women with children who were abandoned by their husbands. Both of these women also suffered from mental health disorders. (Andrew’s mom fears that another mom hates her because she had a manic episode in front of the woman.)

People gossip, spread rumors and lie. A woman unbuckles her seatbelt and climbs into the backseat of a car while it is moving.

We see the backs of two men as they use urinals. A woman mentions bowel movements.

Cha Cha Real Smooth is about life and figuring out how to go through it. It shows some sweet stories about familial relationships as Andrew learns how to appreciate his mom, bond with his brother and respect his new stepdad. And his journey to finding a job that suits him and gives him purpose is really encouraging, too.

But the path he took to get there wasn’t so smooth.

Andrew really struggles at first. Not knowing what he’s going to do with his life, he parties it up, sleeps around and falls for the wrong girl.

That girl, Domino, seems to almost vicariously live through Andrew. Her 20’s were tougher than most because she got married, had a child and then got divorced all while she was still really young. So when 22-year-old Andrew shows up and shows interest, she allows herself to make herself … interesting.

But eventually, Domino realizes that what she’s doing is wrong. She knows that her depression causes her to doubt what is true—such as the fact that she loves her fiancé—and she puts an end to her dalliance with Andrew, encouraging him to focus on himself before he tries to add other people into the equation.

The film itself is pretty rough too. Even with people like Greg reminding the adults in the room not to swear in front of kids, language is harsh with dozens of uses of the f-word. Sex is present both on and off screen and leads to more than one extramarital affair. And even violence becomes an issue thanks to the immature actions of parents.

So families ought to just cha-cha right past this one.