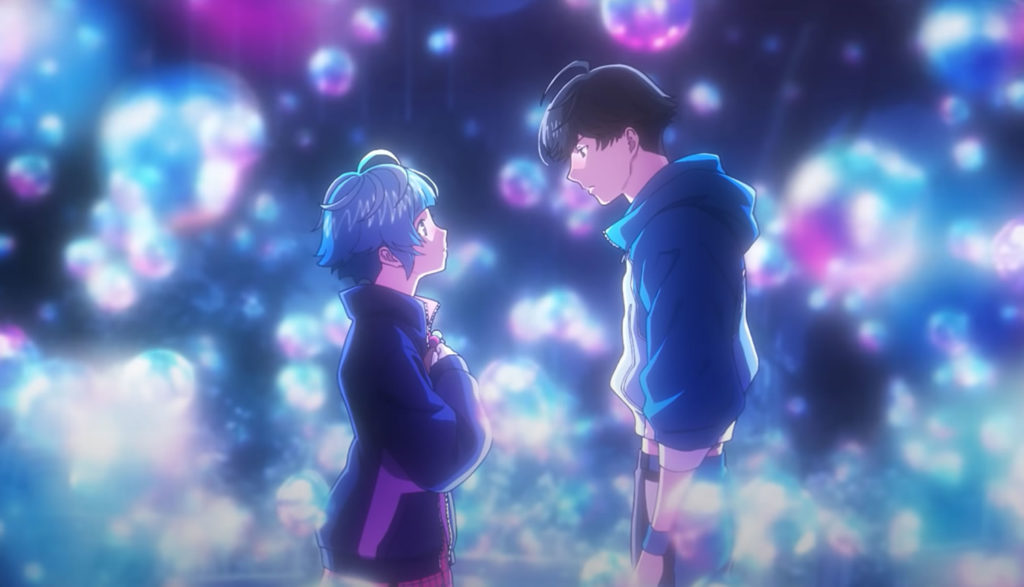 Bubbles aren’t my top concern when it comes to city-destroying events. But what do I know? I’m not Hibiki.

Five years ago, strange bubbles began raining down from the sky all around the globe. Their gravity-shifting properties unleashed chaos. Nowhere more so than central Tokyo, where a large explosion caused a dome-like bubble to enclose part of the city. Though the bubbles have stopped falling elsewhere, they’ve never ceased within central Tokyo, causing massive flooding and a total abandonment of the city.

Well, almost total abandonment. Though the overall sector is restricted, that hasn’t stopped orphan boys from sneaking into the zone to create a new life for themselves. Due to the flooding, decaying buildings and floating structures, the boys have become spectacular at parkour, making sports teams and a whole game out of the experience.

One such boy is Hibiki, whose mother abandoned him after discovering that he has auditory hypersensitivity, causing the loud noises of the city to bring him to his knees. On the other hand, it also means that he alone can hear the sound of a song emanating from the focal point of the bubble explosion.

That is, until a mysterious mute girl named Uta appears who can also hear the song—a girl whose body turns into bubbles if another human touches her. “You’re the prince,” she tells Hibiki. “I’m the Little Mermaid.”

At one point, Uta comments on the necessity of pain to experience joy. “This is the human heart,” she says. “It’s a heart that’s able to feel loneliness. A heart that feels happiness and pain and true love.” We may feel inclined to lament that the world will bring pain; but without it, this story says, we would not be able to know joy.

That theme is depicted throughout the movie in many ways, whether it’s orphan boys finding community with one another or the enjoyment of a parkour game as a result of a catastrophic event. The boys care for one another, and they’re even willing to put their own lives at risk in order to help one another when they’re in dangerous situations.

Families looking for a spiritual takeaway here can build on the idea above that pain and blessing often mingle together. Likewise in our own lives, we shouldn’t be focused on the fact that all roses have thorns. Instead, we can rejoice that even in a world full of thorns, the Lord provides us with roses as well.

That said, there’s little else here that’s even remotely related to a Christian worldview. Instead, the movie provides a vague, pseudo-pantheistic worldview. “The cycle of collapse and rebirth continues. From the Big Bang, 13.8 billion years ago, the elements which make up our bodies have reassembled again and again.” According to the movie, we assemble, burst, scatter and repeat. We are one with a universe made up of the same components, making up the stars in one lifetime and humanity in another. One day, billions of years into the future, we will all be together, “part of a massive vortex.”

It’s important to note that this idea isn’t expounded upon nor clarified whatsoever during the film, mainly appearing as a short monologue near the movie’s end as the animation cycles through various real-world examples of vortex shapes in nature. As a result, the message comes across as very unclear and abrupt, as if it were tacked on simply for the movie to attempt to have some strange philosophical statement in a film primarily focused on bubbles and parkour.

Perhaps tied to this philosophy is when we learn that the bubbles are somewhat sentient. Hibiki mentions that he “may have unintentionally angered the bubbles.” In a couple spots, the bubbles take on the form of a large, malicious-looking eyeball, and the entity stands as the primary antagonist to Hibiki.

One character says that another person was about to “meet his maker.”

Uta kisses an unconscious Hibiki twice while underwater. Though the kiss is remembered romantically, it appears to be (at least partially) in order for Uta to provide Hibiki with oxygen. Hibiki and Uta often stare and think romantically about one another, causing their cheeks to turn red. Both Uta and Hibiki wear shirts that reveal their midriffs. Leonardo da Vinci’s “Vitruvian Man” drawing is briefly visible at one point.

Hibiki falls from a tower and is tossed around in a raging underwater current. He is attacked by a chicken, leaving a wound on his face. A malicious entity attempts to drown Hibiki. His parkour team member Kai puts both him and another friend, Usagi, into headlocks. Uta puts her hand into boiling water.

An explosion rocks the city and causes widespread building destruction. Dilapidated buildings and structures collapse throughout the movie. Corpses are seen in photos found in a magazine.

[Spoiler Warning] After holding onto Hibiki for his protection, Uta turns into bubbles, dying.

Makoto and a couple other adult characters drink beer. An underage character attempts to drink one, but the older characters do not let him.

Makoto mentions that the elements that make up our bodies will one day form a star. Hibiki’s mother seemingly abandons him for having an auditory condition.

Bubble combines The Little Mermaid and your standard sci-fi disaster. The animated visuals are colorful and gorgeous. It’s directed by Tetsurō Araki, the same person who directed the award-winning TV series Attack on Titan. The main protagonist is voiced by Zach Aguilar, the same voice behind the main character of the extremely popular Demon Slayer: Kimetsu no Yaiba.

So with such a talented team behind the movie, why was it so difficult to enjoy?

Bubble follows Hibiki, a parkour-loving orphan among parkour-loving orphans, all of whom call the flooded and abandoned central Tokyo their home. A mysterious calamity five years ago caused gravity-fluctuating bubbles to fall upon the city, seemingly triggered by an explosion at an observation tower. Ever since, Hibiki, with his auditory hypersensitivity, is the only one who can hear a strange song emanating from the tower.

But one day, Hibiki finds himself in a dangerous situation, and he’s saved by a strange girl who turns into bubbles at his touch—the very same bubbles which have plagued the city for so long. And as it turns out, she’s also able to hear the tower’s captivating melody. In fact, she just might be the key to figuring out how that disaster occurred. Can’t you already feel the budding romance, ahem, bubbling up?

Though the movie offers stunning visuals, it offers little in terms of character development or general plot. The side characters seem to exist purely to assist Hibiki or to show off how cool he is. Unfortunately, the film couldn’t decide if it wanted to be a disaster movie, a parkour flick or a pseudo-spiritual talk about human existence. So it decides to mash all three themes together, doing justice to none of them. Like our parkour-loving protagonist, we leap from plot point to plot point, making sure to hit everything but never getting enough time to truly understand each point’s true significance.

Want to know why there are strange, red-watered whirlpools called Antlion Pits? Too bad. Wondering what vortexes have to do with anything? That’s not your purview. Instead, strap yourself in for the strangest adaptation of The Little Mermaid you’ve ever seen, complete with water-boosting propulsion boots and bubbles that change color to kindly inform you of their level of maliciousness.

Content concerns here are both concrete and philosophical. There’s quite a lot of profanity for something rated TV-PG. On top of that, we’ve got spiritual worldview issues, too. The story describes how everything in the universe is connected through a process of assembling together, bursting apart, scattering and repeating, leaving a vaguely pantheistic worldview at its core. A malicious supernatural entity stands at the center of the story, and the dangers of drowning are ever-present.

Before I knew it, the Bubble popped as quickly as it formed, leaving me more confused during the credits than I was at the start and giving me a slightly irrational fear of suds.