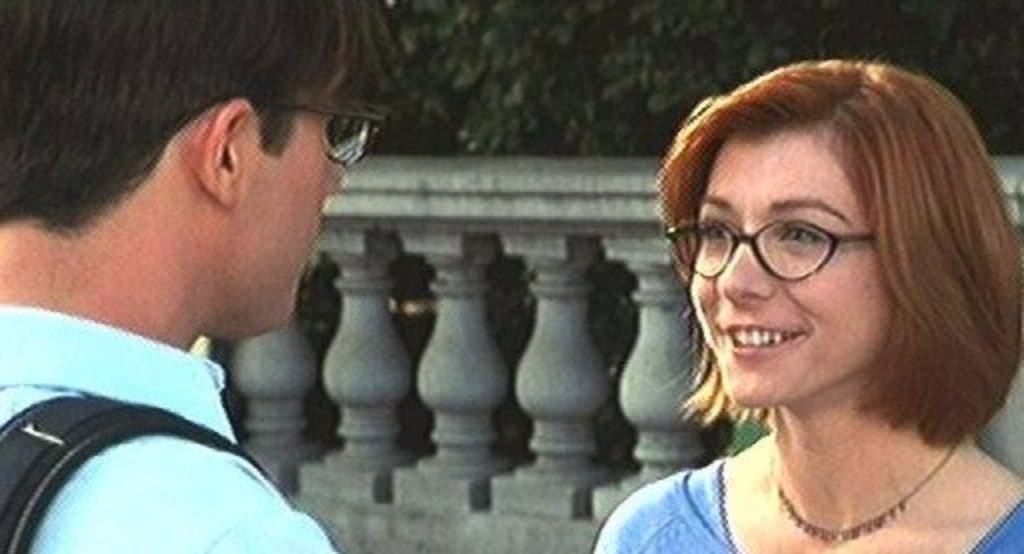 The roles are reversed, the scenes shuffled and the ages changed, but there’s no escaping the fact that Boys and Girls is a sloppy, teen-ized retread of the 1989 R-rated comedy When Harry Met Sally. Ryan and Jennifer first meet when they are just middle-schoolers. They briefly run into each other again in high school. The years pass and suddenly they’re in college. Each time they talk, they fight. Then they become friends and stay that way for a couple of years. Then, as declared in the film’s promo posters, “Sex changes everything!” The two fall into bed together and instantly become strangers again. Ryan’s roommate, Hunter, and Jennifer’s roommate, Amy, lurk in the background, waiting for their own ships to come in, interjecting comedic elements and a few none-too-subtle side plots.

Positive Elements: Love is a many-petaled flower. It’s full of beauty and surprise, yet requires lots of watering and hard work to survive. Ryan and Jennifer learn the hard way that true lovers must tend both sides of love’s garden for it to stay in bloom. Ryan wants to plan out his life, but finds that he can’t. Jennifer lives moment to moment and slowly learns that nothing she clings to actually lasts. And then they fall in love. … Meanwhile, Hunter discovers that the best way to “get girls” is to stop trying to get girls. His facades and lies aren’t working so he gives honesty a try. It works. (It’s just unfortunate that “working” in this context immediately leads to sex.)

The posters are correct. It is true. Sex changes everything. That message comes through loud and clear. In one scene, Jennifer laments that if she had known their actions would lead to the end of their friendship, she never would have done it. Ryan agrees. Too bad most moviegoers will see this “sexual fallout” as merely a temporary setback.

Sexual Content: Surprised by their sudden passion for each other, Ryan and Jennifer succumb to sexual temptation. The couple pull off each other’s clothes and collapse into bed. The camera pans, but the damage is done; their relationship will never be the same again. Hunter spends all of his screen time trying to figure out ways to con girls into having sex with him (he’s usually unsuccessful). It is implied that Jennifer sleeps around a great deal—a behavior that is matter-of-factly presented as part of her personality and approach to life, not as a moral issue. She and Amy kiss once, but are both startled at their unexpected display of affection and instantly retreat. Dancing at a club takes on a sexual tone when the dancers are sprayed with water and foam. Sexual innuendo and a few coarse jokes also surface. For instance, after hearing Ryan got dumped, Hunter suggests they go to a strip club. As the credits roll, Hunter fantasizes about being seduced by four Victoria’s Secret models. Clad only in lingerie, the women make farting noises and beg Hunter (who’s wearing only silk boxers) to “turn them on” by following suit.

Violent Content: Ryan’s girlfriend, Megan, slaps him across the face when he tells her he slept with Jennifer. Hunter gets the same treatment when he makes an unwanted advance on a girl in his dance class. Hunter accidentally hits a man in a bar with a billiard ball, then, when confronted, hits him in the crotch with the pool cue.

Drug and Alcohol Content: Hunter, Ryan and Jennifer drink beer at a party. A couple of bar scenes show various characters drinking. Jennifer and a date drink alcohol at a restaurant.

Other Negative Content: Several crass comments are made about female menstruation and male pubic hair.

Summary: While there are benefits to exploring stories of love lost and love regained, Boys and Girls ultimately bogs down in nonsensical depictions of brainless collegians banging their empty romantic heads against life’s immovable walls. One moment sensitive and poignant, the next obnoxious and odious, the film concludes with a sweet scene in which Ryan and Jennifer pledge unending love and adoration—a mood that is hastily erased with Hunter’s lust-filled dream shown during the credits. Tacky, tacky, tacky. All director Robert Iscove delivers here is derivative and hackneyed filmmaking designed to draw in a few bucks at the box office before bad word of mouth sends this story straight to the video store bargain bin.