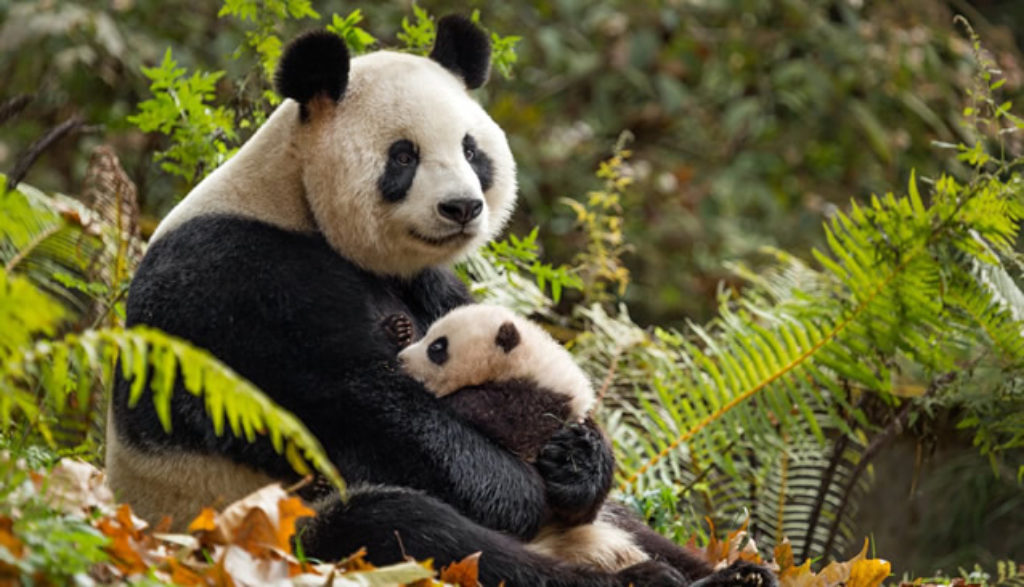 When you think of China, many images may immediately come to mind: the Great Wall, ornate pagodas or maybe huge throngs of people riding bicycles. Think a bit more, and that list likely gets longer: rickshaws, chopsticks and dragons. Soaring Shanghai skyscrapers and perhaps Tiananmen Square.

The documentary Born in China is the antithesis of all that. This Disneynature film, like its six theatrical predecessors (Earth, Oceans, African* Cats, Bears, Monkey Kingdom, Chimpanzee)* wants to transport filmgoers into the wilds of China to meet its furry (and occasionally feathered) residents. More specifically, the film introduces us to pandas, monkeys, snow leopards, antelope and cranes in some of the most jaw-dropping scenic vistas as you’ll ever see on the big screen.

Plus, in classic, imaginative Disney style, we learn what these animals are thinking as they go about their daily activities. How? Because narrator, actor John Krasinski, tells us exactly what’s on their minds. (Somehow he must know, right?)

Certain to be most viewers’ favorites will be the account of a giant panda mom, YaYa, and her baby, Mei Mei. We’re told that pandas live a solitary life, except when raising their young. YaYa, says Krasinski, will be there for Mei Mei until her baby learns the crucial life skill of tree climbing (to escape predators, of course). Until such a time, it seems as if these oh-so-cute black and white cuddleables will just need to spend a lot of time hugging each other. Cue up the awwwwwws!

And when they’re not embracing, there’s always exploring, scratching, frolicking and munching to fill up these playful pandas days (“up to 40 pounds a day” of bamboo for YaYa, we hear). I can’t speak for all viewers, but I couldn’t help whisper, “They’re so cute!” to my wife as we watched the movie.

Not quite as endearing, but certainly up there, are the golden snub-nose monkeys. The film follows one primate in particular: Tao Tao. Now, this young male has been the favored son for a couple of years. But everything changes when his sister is born. Poor ol’ Tao Tao just doesn’t have that same sparkle in his eyes now that lil’ sis is in the picture, as he no longer seems to be the apple of his parents’ eyes. So, Tao Tao joins the so-called “lost boys”—a group of mostly males who enjoying swinging through the forest, making a game out of breaking branches, and foraging for edibles.

Meanwhile, a majestic snow leopard named Dawa and her two cubs are struggling to survive in China’s harsh mountainous environs some 14,000 feet above sea level. One doesn’t get the feeling that there’s much time to really enjoy big-cat life, although we fortunately see a few glimpses of it. Mostly, however, these snow leopards’ survival requires Dawa to engage in risky hunts in the hope of eking one more day’s food for her young ‘uns.

Attention is also given to massive herds of Tibetan antelope known as chiru, beginning with the migration of females to a lake where they give birth (one of which the film shows us). Brief screen time is also given to red-crowned cranes, although the film doesn’t proffer a detailed, Disneyfied narrative for these rare birds.

With few exceptions, all of the Disneynature films have effectively walked the fine line between predator and prey stories, mostly leaving the gore on the cutting room floor. Still, it’s been hard at times to know which animals to root for. In African Cats, for instance, we were forced to ponder whether we wanted a mama lioness to capture a graceful antelope on the savanna to feed her cubs, or whether we hoped that graceful creature could escape her clawed clutches.

Previous films have mostly left wilderness banquet time up to our imaginations, without showing much bloody biting and chewing. As such, all six of the Disneynature films that Plugged In has reviewed have received a 4.5 or better for family friendliness. But Born in China pushes that delicate predator-prey visual balance a bit further than Disney’s previous nature documentaries, capturing life-and-death scenarios that are more visually intense. For sensitive younger viewers, some of what we see here might be a bit too much.

For instance, no fewer than three scenes depict a snow leopard with a mountain sheep in its mouth. A close-up shot of a sheep carcass leaves little to the imagination. A baby monkey gets carried off by a goshawk, presumably for lunch. Wolves chase chiro (but, thankfully, aren’t “successful” in their hunt). [Spoiler Warning] And Dawa doesn’t make it, apparently due to injuries sustained when she gruesomely bites into the neck of a baby yak, only to have mommy yak chase her off with her powerful head-butting. (My wife informed me after the film that she had her eyes closed during this encounter—something others may want to consider.)

In addition, the concept of evolution is given a quick nod when the narrator tells us that pandas have an “evolutionary urge” to climb. And although God is never mentioned (yet one can’t help but see His imprint everywhere in this film!), we’re told that Dawa’s “body is designed” to camouflage her in the rocky terrain where she dwells, subtly implying that there must be a Designer somewhere.

More disconcerting for some parents, however, may be a smattering of Eastern philosophy. It’s said that the red-crowned crane is associated with longevity and good fortune among the Chinese. Twice we’re told that these majestic birds take the soul of a departed creature from this world to the next (although once that journey is clearly described as a mythological one). A “circle of life” reference perhaps hints at reincarnation. And the panda’s coloring is mentioned as an example of the “embodiment of yin and yang opposing forces” (a concept which has religious implications in both Confucianism and Taoism though the film, in fairness, doesn’t go there explicitly).

Except for the youngest viewers, though, none of the aforementioned caveats are so egregious as to justify theatrical abstinence. On the contrary, they seem to be shouting, “Hey, use me as a way to help teach your children what it means to be discerning.” And along the path toward that life skill, there are a whole lot of darling pandas, stalking leopards and mischievous monkeys to hang out with for an hour and 16 minutes here. All of whom were born in China.