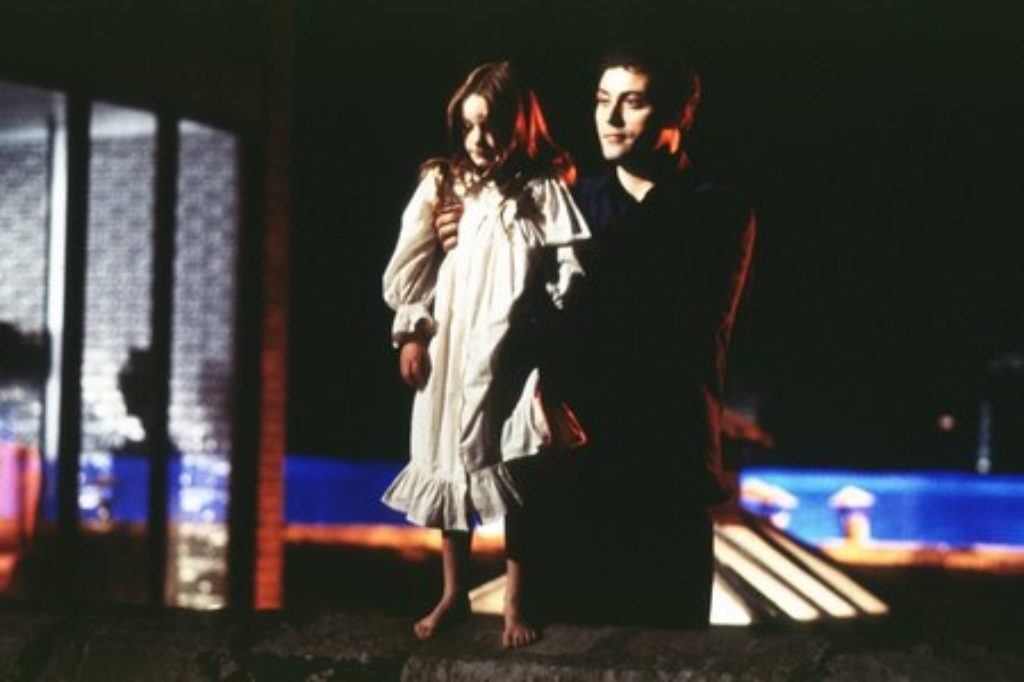 In this unique, often uncomfortable cross between The Omen and Touched by an Angel, Maggie O’Connor suddenly becomes a mother when her drug-addicted sister, Jenna, abandons her autistic newborn daughter, Cody. For the next six years, Maggie raises Cody with love and understanding. But the one thing she couldn’t possibly understand is Cody’s special giftedness that simultaneously makes her a holy messenger for God and a dangerous threat to Satan’s earthly kingdom. With Herod-like zeal, a Satanic cult led by charismatic self-help guru Eric Stark has been kidnapping and murdering children born on December 16, 1993. Their quest? Find the “chosen one” and either turn her to the dark side or destroy her. It’s up to Maggie and former seminary student-turned cop John Travis (who specializes in combating ritual sacrifice and occult crimes) to rescue Cody from the clutches of evil before an appointed eve on which the forces of heaven and hell will surely collide.

NOTE: Bless the Child does not use its drama to promote a theologically based end-times doctrine. It is not passed off as prophecy, but pure fiction. Therefore, the plausibility of the plot will not be as central to this analysis as the film’s statements about the character of God, the portrayal of Christians and statements made from and about the Bible.

positive elements: The prevailing message here is that Satan poses a serious threat to man, but that God is even more powerful. There are many reverent nods to prayer, as well as God’s power, love and holiness (for specifics, see “Spiritual Content”). Maggie chastises her sister for being on drugs while pregnant and reminds Jenna that her daughter’s health and safety must come first. Then she practices what she preaches. Not only does Maggie put herself in extreme danger to protect her niece from the cult, but she makes an even greater sacrifice by subjugating her own needs and desires for six solid years and assuming full responsibility for the abandoned child. Committed to the case, Travis doggedly pursues evil in the name of justice—and God. A former cult member risks her life to provide Maggie with information critical to locating Cody. On separate occasions, minor characters allude to the ability of entertainment to impact people’s thinking (a nun playfully blames The Lion King with heightening little ones’ awareness of death; a cop refers to Satanic weirdos getting their ideas off the backs of comic books).

spiritual content: With so much spiritual content, it may be easiest to digest by dividing those attitudes and principles by character. Also, this film’s plot is twisted so tightly around spiritual things that the following explanations will unavoidably reveal some “surprises”:

Maggie starts out faithless. A stranger on a bus asks her about the Bible and, when Maggie admits she’s not a believer, the woman says in broken English, “It’s there if you believe or not believe; it don’t care.” Maggie begins to see signs of Cody’s uniqueness and is given insight into the world of spiritual warfare (she sees flying harpies, snakes and other demonic creatures surrounding evil places). Her concern for Cody and her subsequent investigation into strange goings on cause her to draw nearer to the church. She even prays. By the end, after being miraculously helped by angels (pulled from a doomed auto, granted escape from a demon, etc.) and healed by God, there’s no way Maggie can deny His awesome power.

Travis shows up his first day in a new precinct and immediately places a Bible on his desk. A colleague asks if he’s some kind of priest, to which Travis proudly responds that he went to seminary, but decided solving occult crimes was another way to battle the evil one. When circumstances seem to overpower him, Travis prays for help. A kindly janitor sees him working late and assures him, “You’re not working alone tonight. A good man is never alone in this world” before disappearing (just then, a pot of dead lilies in Travis’ office is shown in full bloom and he realizes he has been visited by an angel).

The vile Eric Stark is never actually referred to as the Antichrist, but he’s clearly a high ranking apostate of hell. His public campaign of self-actualization, called “The New Dawn,” is merely a facade behind which he heads a murdering cult committed to serving Satan. He engineers “the slaughter of the innocent” and once he obtains custody of Cody, tries to convince her that God is not worthy of her trust: Eric: “Do you love God, Cody?” Cody: “Yes.” Eric: “Maybe that’s just because you think you’re supposed to.” He shows her a destitute bum and accuses God of indifference before using the power of suggestion to encourage the man to take his own life. Later, Eric escorts Cody to a rooftop and, just as Satan tempted Jesus in the wilderness, dares her to step off if she believes God will save her (“Maybe God’s just a nice idea, like the Easter bunny . . .”). He eventually puts Cody on an altar to be sacrificed. Satan himself materializes during this finale, but the forces of evil are no match for God and His people.

Cody is presented as an instrument of the Lord. According to a reformed cult member played by Christina Ricci, “She’s gonna lead people to God—lots of people.” She also has a compassionate heart, a childlike love for the “baby Jesus” and the gift of healing. Cody cradles a dead bird and it miraculously comes back to life (Maggie also benefits from the resurrection power administered through her). In church, candles light by themselves and a statue of the virgin Mary sheds tears in Cody’s presence. When Eric shows her the hurting homeless man and implies that God will keep him from setting himself on fire if He really loves the guy, Cody steps forward, blows out the match, hugs the man around the neck and whispers, “He hasn’t forgotten you.” She goes out of her way to show kindness and offers a healing embrace to a cancer patient. Also, her faith holds up against temptation and death threats. If there’s a concern here, it’s that some viewers may perceive Cody as a present-day Christ figure. She was born under a star described as similar to the Bethlehem star. While she is never referred to as divine (simply a powerful instrument for directing people to God), the intentional parallels to Jesus’ birth, temptation and miracles could create confusion.

Reverend Grissom is only onscreen for one scene, but Maggie’s visit to the wise priest offers him a chance to say things like, “The devil’s greatest achievement is to make people believe he doesn’t really exist,” and that the very notion of evil has become “politically incorrect.” He expounds on biblical history, and decries moral relativism and mankind’s decision to ignore God’s rules so that we can concoct our own. Maggie is empowered by his conviction that “All of us are chosen by God and all of us can stand against the darkness in His light.” Meanwhile, a noble group of nuns calls an emergency prayer meeting to intercede for the film’s heroes, recognizing that the battle they face is a spiritual one.

sexual content: When Maggie asks her promiscuous sister who Cody’s father is, the girl admits that she is rather indiscriminate about her bedfellows. A cop uses crass sexual slang to refer to Maggie.

violent content: The film’s major downfall is its intense violence and moments of gore. People are pummeled, shot, knifed, run down by automobiles, set ablaze and attacked by rats. A sweet little boy is kidnapped and not seen again until his body is recovered from the river. A young woman is beaten to death (when Maggie touches her inert body, the girl’s decapitated head rolls off of her shoulders). An evil nanny plunges knitting needles into a man’s eyes (wounds graphically displayed).

crude or profane language: Not quite a dozen instances of profanity—relatively few for an R-rated movie—but they do include two f-words.

drug and alcohol content: Hard drugs show up on occasion, but are in no way glamorized. Jenna and another young woman bear the scars of addiction. The physical, psychological and relational toll is obviously devastating. One sad scene finds little Cody walking in on Eric as he’s injecting her mother with heroin. Maggie sips wine just before having wild visions. The cultists attempt to kill Maggie by drugging her and putting her behind the wheel of a car with no brakes (pills and alcohol have been planted in the vehicle to make it look like an accident).

conclusion: Critics haven’t had many nice things to say about Bless the Child. Granted, it’s not a brilliant film, but it’s refreshing to find an entry in this genre that has such deep respect for the God of the Bible. I went in expecting Stigmata or End of Days, but was pleasantly surprised to see orthodox Christianity elevated to a gutsy virile, victorious role. Jesus, good. Satan, bad. Man needs divine intervention—including guardian angels—to battle evil. Hardly the impotent faith usually seen on the big screen.The director, Chuck Russell, said, “What is so unique about this movie is that most supernatural thrillers tend to empower evil only, which always seemed odd to me. Why are we in Hollywood frightened to empower good as well? There is hope in Bless the Child, and there is a sense of the power of good over the power of evil that I find stirring.” Me too. And for that, Chuck Russell and Cathy Cash Spellman (whose book provided the story) deserve applause.

Having said all of that, I can’t really recommend this film. Some families may object to the tale’s overall creepiness, but it’s the unnecessarily gory violence and pointless obscenities that are simply inexcusable. The filmmakers shoot themselves in the foot by alienating the very segment of the population that could make Bless the Child a box-office hit. Indeed, Christians who might otherwise be uplifted by its pro-God, Frank Peretti-esque themes won’t pay to hear the f-word or see a girl lose her head in graphic fashion. And I don’t blame them.