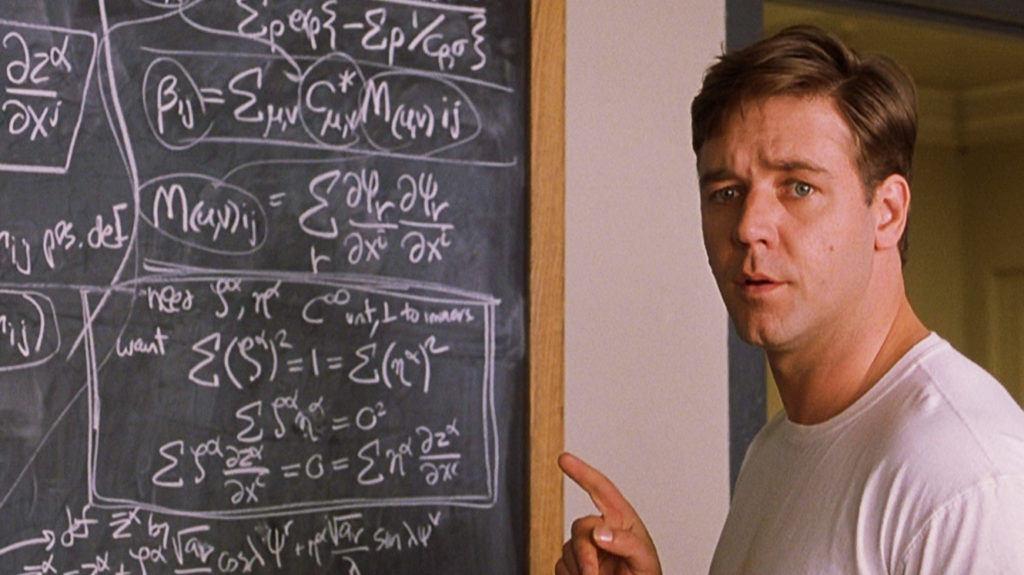 As a graduate student at Princeton in 1947, math whiz John Nash won’t set foot in a classroom for fear of dulling his creative genius. Instead he spends his time scribbling formulas on windowpanes in search of a truly original and revolutionary idea. Nash isn’t the most popular fellow on campus, which is largely his own fault. He admits, “I’m quite well balanced; I have a chip on both shoulders. I don’t like people much and they don’t like me.” But even if moviegoers don’t exactly like this cold fish at the start, we learn to appreciate his quirky intellect. Apparently, so does William Parcher, an agent with the Department of Defense. After Nash experiences his scientific breakthrough and proves himself an expert code-breaker, Parcher enlists him to scour magazines in search of imbedded Soviet messages to operatives threatening to detonate a nuclear warhead on American soil.

It’s now the early 1950s. Nash courts and marries Alicia, a pretty coed who finds even his unromantic technospeak charming. Unable to share the top-secret activities that occupy his mind, he struggles with the secrets he must keep from her. But things come to a head when dark-clad figures close in on Nash during a speaking engagement. It seems the Russians have found him. Claiming to be a psychiatrist eager to help Nash, a man named Dr. Rosen sedates him and commits him to a psychiatric ward. Rosen tells Alicia that her husband is schizophrenic, and that the people and activities consuming his energy are merely fantastic conspiracy theories and paranoid delusions. Are they? Or is Nash a pawn in an intricate Cold War political plot? Despite these uncertainties, Alicia stands by her man to the very end, proving that a beautiful mind is surpassed only by a devoted heart. In Nash’s own words, “The most important discovery of my life . . . is that only in the mysterious equation of love can any logic and reason be found.”

positive elements: Despite being a drinker and womanizer, Nash’s college roommate, Charles, is a faithful companion and constant source of encouragement. A loving uncle, Charles explains that he accepted custody of his young niece when his sister was killed in a car crash. Nash refutes Adam Smith’s law of governing dynamics, suggesting that a group does not always benefit from each member’s selfish ambition, but that cooperation can yield positive benefits for all involved. Taking control of his thought life, Nash states, “Like a diet of the mind, I choose not to indulge certain appetites,” a great (if unintentional) illustration of 2 Corinthians 10:5. Similarly, Charles tells Nash, “Mathematics won’t lead you to higher truth.” Alicia gives her beau a handkerchief for good luck, to which the ever-logical Nash replies, “I don’t believe in luck, but I do believe in assigning value to things” as he pockets the gift. Nash wants to serve his country as a code-breaker, but worries about how his covert activities might impact his wife and unborn child. Feeling the net tightening around him, he insists that Alicia seek shelter at her mother’s home. She assures the safety of their infant son, but refuses to leave her husband’s side (throughout the ordeal she is patient, loyal, sensitive and nurturing toward Nash). Hansen turns out to be a pretty decent guy when, decades after his rivalry with Nash, he shows mercy by giving the ostracized genius a chance to rejoin the Princeton community.

spiritual content: Alicia concludes “God must be a painter” because He created so many colors. When a colleague sees Nash and invokes the name of Christ in an inappropriate manner, Nash replies glibly that his “savior complex” hasn’t quite aspired to that level.

sexual content: Nash and his buddies are preoccupied with finding willing sexual partners. Right after being introduced to a girl, Nash forgoes even the most basic social graces and asks what it will take for her to sleep with him. It seems to be his style. He later propositions Alicia during a date, saying, “I tend to expedite information flow by being direct. All I really want to do is have intercourse with you as soon as possible.” She’s turned on by his forthrightness and it’s implied that they have sex. After they’re married, Alicia reaches beneath the covers in an unsuccessful attempt to put her husband in the mood. Charles makes a crass sexual remark. Nash’s Nobel Prize-caliber breakthrough occurs as a result of calculating how all of his friends can “get laid” by being “selfless.” The way it works is that they approach one beautiful blond, then bypass her altogether in favor of her four less attractive friends.

violent content: In frustration, Nash bangs his head against a window, cracking the glass and bloodying his forehead. He punches Dr. Rosen. A car chase involving an exchange of gunfire ends with Nash and Parcher’s bullet-riddled pursuers driving into a river. Elsewhere, characters brandish guns in a threatening manner. Newsreel footage shows the devastating power of a nuclear blast. Rosen’s people perform violent shock therapy on Nash. Several people are slapped. Alicia snaps under the stress, hurling a glass against a wall and smashing a mirror. To prove his story and his sanity, Nash gouges his arm to retrieve an implanted security device (lots of blood). There’s an intense scene in which a baby nearly drowns in a bathtub.

crude or profane language: Two dozen profanities include several s-words and 10 misuses of God’s name (five are exclamations of Jesus’ name). At one point, Charles employs crass anatomical slang in a sexual context. A young man uses a derogatory term for Japanese people.

drug and alcohol content: Many characters smoke cigarettes. We meet Charles after he has had a bit too much Johnny Walker (shortly thereafter, the free-spirit offers a flask to Nash and the two share a slug). At a campus bar, guys drink beer on several occasions. Nash and Charles both proclaim a deep “respect for beer.” Champagne is used to toast Nash’s success, and later appears at a formal party. Charles makes a reference to a drunk driving fatality. Dr. Rosen keeps Nash heavily medicated with substances ranging from Thorazine and pills to insulin shocks.

other negative elements: Nash is not an easy protagonist to embrace. In addition to admitting he doesn’t like people, he’s extremely arrogant. He despises having to share face time on a magazine cover with peers he calls “hacks.” As a teacher, he tells sweltering students wishing to let in fresh air and accompanying street noise, “Your comfort comes second to my ability to hear my own voice.” He resents sharing a scholarship with Hansen and belittles the man’s achievements as “derivative.”

conclusion: This is a very well-made, well-acted film guaranteed to get attention at Oscar time. But as taut and beguiling as A Beautiful Mind may be as a political thriller/psychological drama, the film’s themes of marital devotion and one man’s obsessive quest for personal significance left the greatest impression. It’s the kind of movie mature viewers will enjoy discussing long after the lights come up. Unfortunately, it seems any time Hollywood tackles “grown up” subject matter, it feels the need to toss in unnecessary content that can undermine the experience. Here the culprits are language and sexual immorality. Frustrating. Calculating viewers who factor in those variables will likely come to a singular conclusion: A Beautiful Mind is an intriguing, yet imperfect formula for a night out at the movies.