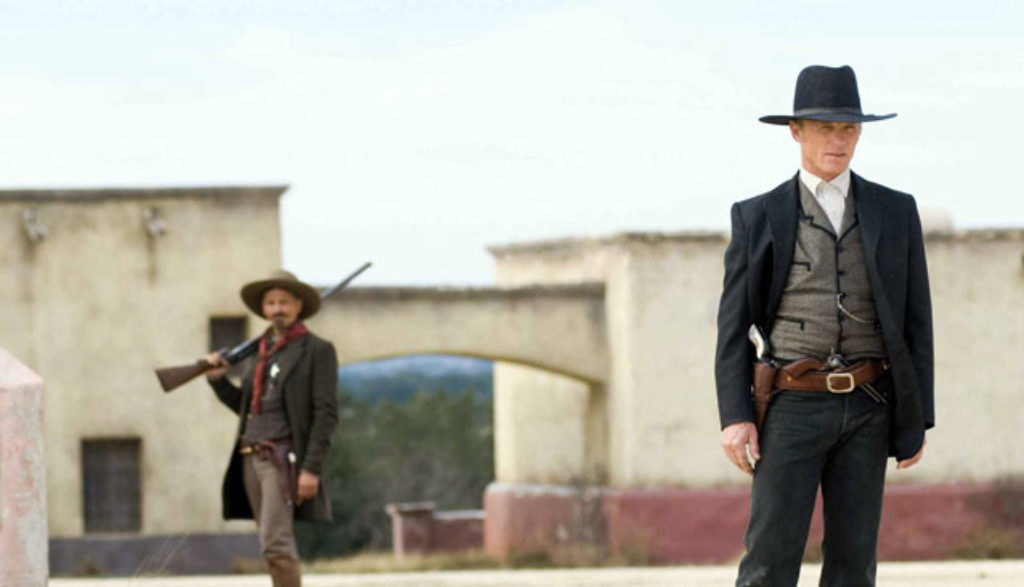 The wind, ever thick with dust and uprooted scrub, whistles down wide, hard-packed dirt streets—slamming unlatched shutters to and fro, making clothesline-bound long johns do a jig and driving anyone with spit and sense behind closed doors. This is life in the New Mexico Territories of 1882. This is where Virgil Cole and Everett Hitch make their living.

When these two weathered gunmen arrive in Appaloosa, they’re hired on the spot to be the town’s marshal and deputy. It seems a greedy rancher, Randall Bragg, and his hired men have been terrorizing the area and recently shot and killed the previous lawmen. So Cole and Hitch, partners and traveling peacekeepers for a dozen years, pin on badges and quietly promise to use their formidable skills to, as they not-so-delicately put it, “Button up the town like a nun’s corset.”

Their work goes well. After quickly dealing with a few of Bragg’s men, it looks like the seasoned duo will indeed deliver rightful justice to Appaloosa. But then an unforeseen event turns the stoic Cole’s plans on end. A (seemingly) prim and proper widow, Mrs. Allison French, blows into town. She plays piano. She’s clean. Why, she even chews her food well. Cole, whose only previous experience with women was limited to “whores and squaws,” is smitten.

But there’s a problem. This woman could get in the way of Cole carrying out the duty he feels honor-bound to uphold. And worse, she might just be the wedge that separates him from the one person he trusts and relies on above all others.

Cole and Hitch have a deep-seated respect and unspoken affection for each other. Cole may be drawn to Mrs. French, but he never doubts his friend. Likewise, Hitch is willing to put everything on the line for Cole. And he refuses to let temptation take a stab at their mutual loyalty. When Mrs. French unwisely makes a move on Hitch and tries to kiss him, Hitch pushes her away and says, “We’re not with each other. We’re both with him.” Hitch even rides away and selflessly breaks up his partnership with Cole when he realizes that it’s the best hope for his friend’s happiness.

Cole is also a man of honor and commitment who believes in the law (far more than Hitch does). He’s willing to take the word of any man—even an enemy—as a point of honor. Hitch casually attests, “Virgil always tells the truth.” Even when Mrs. French sleeps around with other men, Cole stands by his commitment to her (they’re never shown to marry) and says, “I ain’t leavin’ her.”

A young man on Bragg’s payroll comes into town to confess to being there when Bragg killed the old marshal, saying, “I don’t want no part of killin’.” In the face of death threats, the young man testifies against his boss.

Mrs. French and another man are seen from a distance cavorting in a stream. We see them fully naked from the back before she puts on a one-piece undergarment. We also see her walking up the hotel stairs to a man’s bedroom. Hitch is shown lying shirtless in bed with a dancehall girl who wears a skimpy, translucent undergarment. The girl makes a veiled allusion to oral sex.

Appaloosa is not really all about high-tension O.K. Corral-style shootouts. In fact, the gunfights are before-you-can-blink fast in most cases. But there’s still plenty of violence on display:

When the first marshal moves to take two of Bragg’s men, who it’s said killed a man and raped his wife, Bragg shoots the lawman and his deputies point-blank with a rifle. They drop like sacks of feed. Cole and Hitch have a number of run-ins with gunmen, too. They approach three men in a bar to arrest them and the thugs resist, going for their guns. Cole quickly plugs two of them in the chest with his pistol and Hitch shoots the third man with an 8 gauge shotgun, blowing the man halfway across the room and leaving him in a pool of his own blood.

The lawmen also face off against four bad men in the film’s only real shootout. Three of the villains wind up dead—their blood smearing a barn door—and both Cole and Hitch are shot and lie bleeding on the ground. “That didn’t last long,” one of them says. “Everybody could shoot,” the other retorts.

A few hand-to-hand battles take place, as well. For example, a man on horseback mouths off to Cole, and the marshal hits him in the mouth with the handle of his Colt pistol—knocking out a tooth and leaving him bloodied. Cole takes offense at another man’s language in front of Mrs. French, and he proceeds to beat the man mercilessly. The guy is swollen, battered and bleeding profusely before Hitch can drag Cole off him.

Along with dust and grime, foul language tends to blow on this Western wind. Three f-words. Five or six s-words. A handful each of the words “h—,” “d–n” and “b–ch.” God’s and Jesus’ names are misused about 10 times total, including one combination of “God” with “d–n.”

Several scenes take place in the local bar where dancehall girls and patrons drink beer and hard liquor. Whiskey bottles are often present on tabletops in hotel rooms and offices. Cole and Hitch share shots a number of times, and Mrs. French joins them once. The three drink wine at dinner. Bragg drinks brandy, and he and Cole smoke cigars.

Hitch admits that he never took the legal side of his job seriously. “Just a way to feel easier about being a gunman,” he says.

Two of Bragg’s men urinate on the floor in the local bar.

Westerns nowadays are a rare breed—that’s mutating fast. They’re not the big money-makers that they used to be. So we may see one or two a year tumble into the multiplex. And often, when they do show up, they’re wearing a new twist or are buckled into a unique vision designed to perk up the weathered genre.

The blood-soaked and bleak No Country for Old Men is a reflection of this. As is the tense get-the-prisoner-to-the-train-on-time tale 3:10 to Yuma. But truthfully, in their effort to plow new ground, these kinds of films often miss getting to the heart of a real Western.

Appaloosa‘s aim is much truer. It’s a well-crafted slice of cinema that holds to the traditions of the classic cowboy drama. Director/actor Ed Harris takes his time showing us the gritty ethos of a Wild West era long gone by. He bids us to amble along through the dusty flats and rocky ridges with compelling characters—made all the more interesting by dialogue that creatively blends steely-eyed seriousness with wry humor. These are believable individuals who draw us close. Who wrestle with issues of honor, friendship, and right and wrong.

In all its realistic and upright struggles, however, Appaloosa‘s dramatization of frontier life may ring a bit too true. Gun battles are quick but visceral and bloody. Language is sometimes raw. And moral choices—such as Mrs. French’s dancehall floozy brand of faithlessness—are disturbing. These things may very well be honestly reflective of what went on among real-life grizzled gunmen and their gals. But when you put on your white hat and search for the truth of the matter, you realize that it’s not the best territory to explore when all you’re lookin’ for is a night of right-minded fun and frivolity at the local moving picture hall.