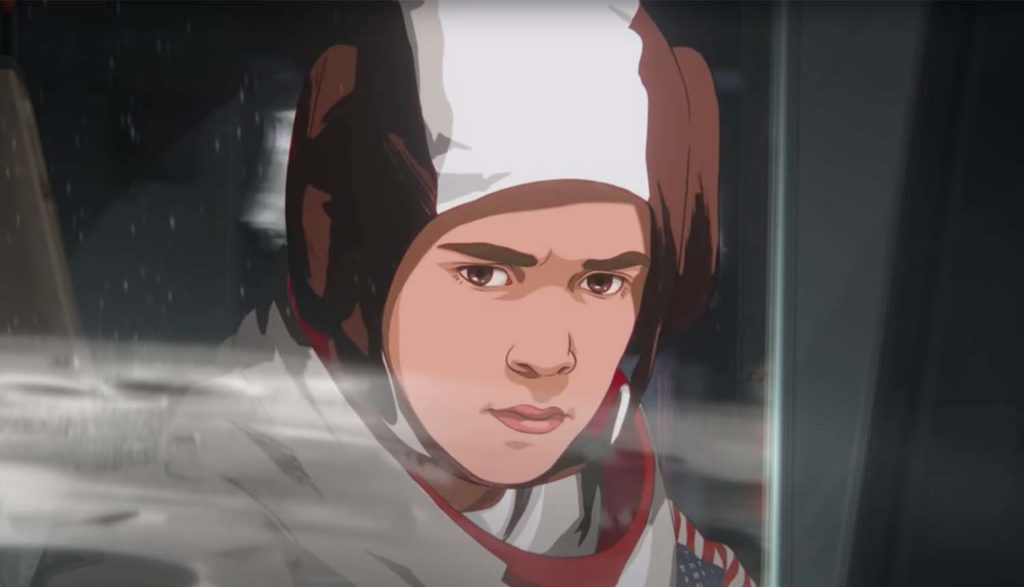 When Stan reflects on growing up in Houston during the late 1960s, it’s filled with fond memories.

There were incessant showings of The Sound of Music, the debut of The Monkees, fun times at the arcade and more. And for the adults, there was Walter Cronkite, the completion of the Astrodome and shows like Dark Shadows and Gilligan’s Island.

But nothing was more interesting to both adults and children than the Space Race. As the U.S. and Soviet Union each pushed to reach the moon first, Everything from movies to advertising orbited around outer space and aliens—and weren’t astronauts just the coolest?

“We accidentally built the lunar module a little too small,” a NASA employee tells Stan. “But we’re not gonna let that set us back.”

They need to test the cramped module before they send Apollo 11 to the moon in front of the entire world, so they seek out a child to engage in a covert test trip to the natural satellite. Stan, with his Presidential Physical Fitness Award (which he’s earned three years in a row) and his skills on the kickball team, is both the perfect candidate and perfect size for this mission.

And so Stan accepts on behalf of the entire free world, knowing the importance of crossing the Space Race finish line before those Russians do. And through the nonstop tests and procedures, Stan prepares for his journey to be the first human—let alone first child—to step on the moon.

Apollo 10½ will trigger nostalgic feelings for many viewers—even those who didn’t grow up in 60s. The simple joys of summer days filled with swims at the public pool, trips to the theater and eating snow cones will encourage us to reminisce on our own childhood pleasures—even if our own memories don’t look exactly the same.

And though the movie reminds us of the good things prominent in the 1960s, it doesn’t glorify the past, refusing to shy away from the decade’s more difficult moments. Rotoscoped clips featuring the Vietnam War, Civil Rights protests and duck-and-cover Cold War drills are all shown on screen, reminding us that though there were unique and enjoyable pleasures in the ‘60s, many issues required our attention as well.

Stan’s Little League team listen to a boy repeat the Little League Pledge before a baseball game, which begins “I trust in God.” After landing on the moon, President Nixon tells Buzz Aldrin and Neil Armstrong that the world is praying that the astronauts will return safely to Earth.

Stan’s sisters play with a Ouija board. Stan remembers that his mother began taking birth control after he was born, but she never told their priest for fear of being excommunicated.

Stan’s parents share a quick kiss on a couple of occasions. Stan references a lewd Herb Alpert album cover of a naked woman covered in whipped cream, and we briefly see it animated. He also sneaks around the town drive-in theater to look for couples making out, and we see the silhouettes of one such couple. Stan and his brothers staple a poster of Raquel Welch in revealing clothes from One Million Years B.C.

Stan’s classmate Tony makes a dirty joke while singing a folk song. Stan’s brother Steve has a stash of Playboy magazines under his desk, and their father takes them away. A commercial for a bikini plays on the TV. People run around in swimsuits on the beach and at the pool. Stan references contraception.

We see various real-world historical clips rotoscoped for the movie. Men shoot Colt .45 pistols into the ground at the Astrodome groundbreaking. Scenes of the Vietnam War show men firing weapons; we see a still image of a man holding a gun toward a dead body and a video of a bloodied and bandaged soldier. Vietnamese buildings burn. We see a still image of Robert Kennedy after he was shot. Stan’s grandmother references the John F. Kennedy assassination. A news report talks about the deaths of the Apollo 1 crew in 1967.

In addition to real clips, Apollo 10½ features scenes from many older movies as well. These include a section of Countdown which shows dead Russian astronauts and It! which depicts a golem killing a man.

A student’s bone sticks out of his arm after he is hit in a game of Red Rover, and blood drips down his arm. Stan’s classmate Ricky hits a kid in the head with a kickball. A child launches a grasshopper on a toy rocket. Children are paddled. A popsicle gets stuck to a child’s tongue, and a significant amount of blood appears when he rips it off. Kids on a Little League team are pelted with baseballs. Stan spears a fish in the jungle. A baby is almost hit by a car.

The s-word is used once. “H—” is used seven times, and “d–n” is used twice. “Crap” is uttered two times. God’s name is misused twice.

Stan’s dad makes distinctions between “rednecks” and “white trash.” Johnny Cash’s “A Boy Named Sue” plays in the background of a car ride, and Stan reminisces on enjoying when the radio would censor the song’s swear word.

Many of Stan’s family members, neighbors and strangers alike smoke cigarettes and cigars. A Mad magazine reads “The Tomb of the Unknown Smoker.” Stan’s sister Vicky informs her siblings that The Beatles’ “Lucy in the Sky with Diamonds” is about LSD.

Stan vomits during his training in the centrifuge machine. Stan’s father steals wood from a construction site. Stan’s brother gives him a wet willy.

Apollo 10½: A Space Age Childhood tells two stories: one of Stan’s childhood nostalgia for the 1960s, and one of Stan’s whimsical lunar journey.

Stan, like many other children growing up in 1960s Houston, knew of someone who worked at NASA, whether it be as an engineer, seamstress, or, in Stan’s father’s case, the head of shipping and receiving. In fact, many aspects of his life were saturated in outer space themes: the used car salesman dressed in a space suit;  movies such as 2001: A Space Odyssey; even playground equipment is shaped like rocket ships. Space, it seemed, truly was the final frontier, and man was about to conquer it. But space also seemed keen to conquer Stan’s life, too, and many of his memories revolve around it.

As Stan prepares to lift off and explore the moon, he constructs a sentimental summary of his space-soaked life, compelling the audience to recall popular board games, movies, bands and more. He reminisces about the public pool and Little League baseball, of Baskin-Robbins and bowling alleys.

Of course, many aspects of his childhood weren’t squeaky clean. He still remembers his father’s occasional swears, for instance, as well as just how many people smoked cigarettes. And he definitely remembers when his classmate’s bone stuck out of his arm after being hit in Red Rover and that lewd Herb Alpert album cover. He also recalls those adult things he always tried ignoring in his childhood innocence:  the Vietnam War, the Robert Kennedy assassination, Paul Ehrlich’s The Population Bomb and more.

To Stan, those were all just a part of life—whether they were good or bad, it was just a sidenote on his coming-of-age story. He doesn’t condone nor rebuke them; they simply were.

For many viewers, though they may not approve of some aspects shown, they’ll understand that view as they watch this nostalgic rotoscoped flick. For others, however, those aspects may be grounds to abort this mission.