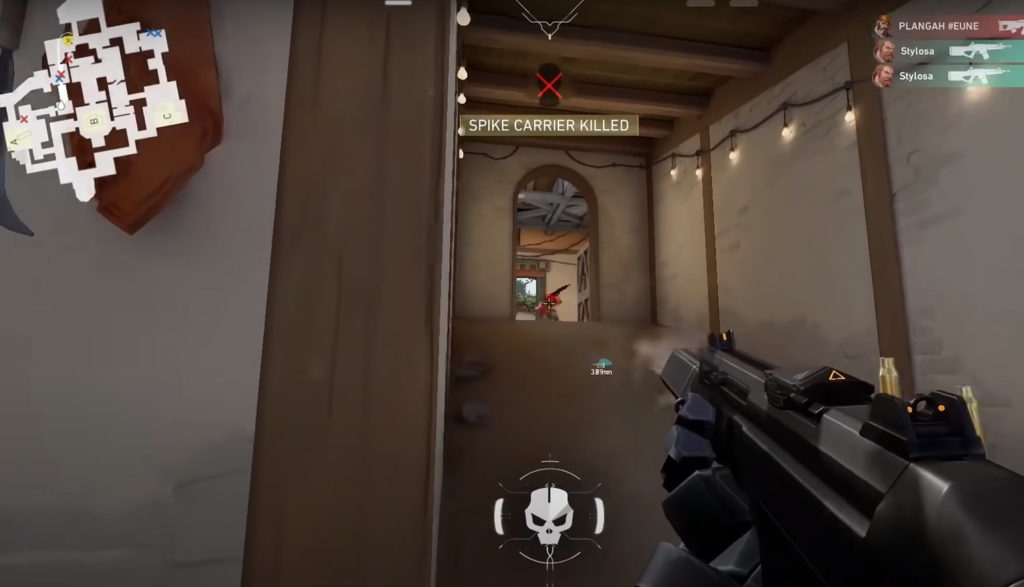 Corner-peeking headshots, instantly appearing obstacles, wall-bouncing fireballs. Yep, there’s a new first-person, 5v5, tactical shooter in town. It’s packed with a blending of Counter-Strike-like action and Overwatch-like characters and abilities. It’s free! And it’s begging to be the online game that keeps bouncing around in your brain and bringing you back over and over and over and over again.

If you’re wondering what I’m babbling about, you’re likely not familiar with this sort of stuff. So let me get a little more detailed. The makers of a very popular multiplayer battle arena game League of Legends have just dropped a new title designed specifically for those who are into highly competitive esports contests.

On one level Valorant is really very simple and straight-forward. On another … not so much.

The easy side works like this: When players jump online, they get to pick an agent from four different classes (more on that in a minute), and then they become part of a five-member team. One team of five is on the offensive, tasked with breaking through and planting a bomb somewhere on a small twisting and turning map. And the other team has the job of defending their area and possibly diffusing said bomb. Teams take turns as either the attackers or defenders in a best-of-25 rounds match.

After each round, everyone is rewarded a certain amount of in-game credits. How much you earn depends on your level of performance. Then you get a short break between rounds to spend that in-game cash on weapons and armor and some limited use abilities that you can take into the next round. And then it’s time to go again. It’s fast, it’s ever-moving and easy, right? Well …

The tougher side of things shows up in the details of how all the above works together. For instance, I mentioned the different classes. You need to be pretty well-versed before choosing your particular agent. What can she do? How does he fit in a team? For instance, Initiator agents can give your team recon info on the opposing force. Duelist agents push forward with area-clearing power. Sentinels lock down areas and give team support. And Controller types slow down an enemy with walls and smoke bombs.

It’s also important to understand just how each agent’s abilities work in Valorant. Instead of having access to several powerful abilities on short cooldowns—like a number of other games of this type—these character abilities are more varied. Agents get a standard ability they can use for free. They have access to a big powerful ultimate ability if they build up enough skill points. And they can purchase two other abilities before the round starts that come with limited uses.

For instance, Brimstone is a tactical commando Controller type who can call down smoke bombs for cover and napalm for enemy attacks; he’s also got a built-in mini-map on his armguard. Sage is a Sentinel type who can toss out various magical orbs to patch up her team or slow down the enemy. And Sova is an Initiator who can launch an arrow that zips around corners and reveals enemy locations, or let fly with ultimate wall-piercing projectiles.

Knowing how all 11 different characters work and how best to mix and match them in a team is essential. And then you have to start thinking about how to strategically use the different team abilities and the terrain around you to your advantage.

T is For What Now?

If you’re thinking that all of that sounds like potentially fun and challenging gameplay, you’re right. For gamers who’re into these kinds of short, strategic contests—filled with trigger-pulling and lots of integrated, magic-like abilities—Valorant offers quite a lot.

If, however, you’re a non-gaming mom or dad wondering if this T-rated game comes with any drawbacks, well, there are a few things you should make note of.

First of all, this is a shooter. Aiming down a gun barrel and trying to assassinate an opponent with a single deadly shot to the noggin’ is the game’s bread-and-butter action. And when you do get that well-placed shot, via anything from an automatic weapon to a shotgun, the aimed-at foe erupts in a gush of wall-splattering gore. (You know, for the entertainment value of a blood volcano.)

Then there’s the time-investment side of things. The matches here are short. But the difference between just playing and mastering certain tactics and strategies can involve many, many matches and many, many hours of gameplay.

Also, while the game itself doesn’t contain a lot of crudities (though I did hear character use of the s-word at least once), the real-world player conversations aren’t always so profanity-free. You can play without talking to others, but not well. Communication and team interaction is pretty vital here for strategic reasons. And when you’re teamed with random squadmates, you can encounter people with an, uh, variety of vocabulary preferences. (Young gamers, however, are offered the option of creating their own match, populated only by a specific friends list.)

Lastly, there’s the in-game purchasing to note. I mentioned the in-game spending above, but I didn’t mention that this game offers players the ability to trade real-world cash for in-game points, too. You can then use them to buy special weapon skins, unlock new characters and gain access to a variety of things that would normally take more time and effort to get your hands on.

The above concerns aren’t horribly egregious in any way. But they are the kind of gameplaying baggage that’s packed into a title of this stripe. Parents must understand that there are costs to consider here … even with a free game.