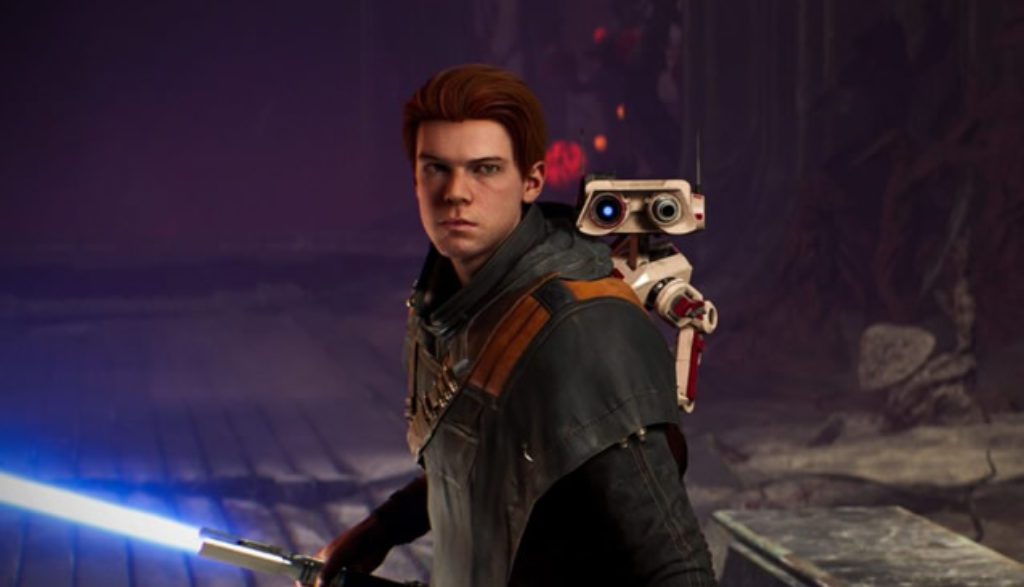 You may have noticed that there’s quite a lot of “movement in the Force” as of late. There’s a new Star Wars show on Disney+ (The Mandalorian), a new movie coming out in theaters (Star Wars: The Rise of Skywalker) and a brand new single-player video game called Star Wars Jedi: Fallen Order.

It’s all pretty exciting for a certain set. Or as Yoda might put it, “Rejoice, Star Wars fans can.”

Even if you’re just a meager game fan, though, that new EA game might just give you something to smile about. So, let’s take a look.

Put Down That Wrench, Young Padawan

The story action in Fallen Order touches down a few years after the events of Revenge of the Sith. But don’t worry if you’re not fully versed on the canon of Lucasfilm’s long-play space opera. All you need know is quickly spelled out here: The domineering, evil Empire is in charge; the monastic, lightsaber-wielding Jedi have been all but wiped out; and the various planetary peoples are oppressed from one end of the galaxy to the other.

You play as a young human named Cal Kestis. Now, Cal appears to be a pretty average (albeit agile) fellow, working diligently in a spaceship scrapyard. But in reality, he’s a former Jedi padawan who went into hiding after the Empire issued it’s infamous Order 66: the decree to kill any Jedi on sight. Problem is, Cal accidentally tumbles into the sightline of one Second Sister, a black-clad Imperial Inquisitor with incredible skills in the Dark Side of the Force.

Cal may have a few lightsaber chops of his own, but he’s no match for this Second Sister. He barely escapes with his life before being rescued by a fallen, former Jedi Knight named Cere, and a squat little multiarmed pilot called Greez. It seems that these two have located a hidden-away planet holding a mysterious Jedi vault. And only a true believer in the Force can hope to unlock its secrets. And so Cal, Cere and Greez become a motley crew destined to embark on a mission to decipher a spiraling, left-behind, galaxy-spanning mystery.

And, somehow, to rebuild the much-needed Jedi order.

Just Run up That Wall …

As you might expect, your duties in a game-long quest such as this generally fall into two broad categories: explore and fight. But as simple as that may sound, it’s a pretty fun combo. OK, the fact that some deceased Jedi had the foresight to set up this planet-hopping quest in order to keep its secrets safe from the Empire can feel a little hard to logically swallow at times. But the overall action is still engaging.

On the exploration side of the coin, it’s all about Cal and his constant droid companion, BD-1, solving environmental puzzles and piecing together important clues. BD-1 is a nimble, tech-tapping, health stim-dispensing, zipline-careening sidekick whom Cal can bounce his ideas off of. And this little beeping and booping pal even ushers in a dash of humor now and again.

These two must jump, climb and wall-run their way through ancient tombs, abandoned space bases and vast maze-like caverns, always looking for the next obstacle-clearing key or puzzle to solve. (Think Lara Croft with a small robot backpack and a glowing sword.) Cal’s adventure harkens back to past lessons with his former Jedi master, revealing important tidbits of background information along the way. Meanwhile, he’s also learning new Force-powered moves for his growing arsenal of combat maneuvers. And with each new discovery, Cal stays just a half-step in front of his Imperial pursuers.

… And Kill Something, Quick!

When those pursuers show up unexpectedly, though, that’s when the fighting side of things comes into play. Along with learning new Force powers, Cal also gains more lightsaber skills as he goes. And they’re doled out in a completely believable way as Cal encounters Stormtrooper and robotic threats.

It’s actually nice to feel like you’re just barely underpowered in this department and trying to learn as you go. That keeps the Empire’s threat ever-present. In fact, the lightsaber battling then becomes very strategic as you layer in new attacks, blocks and parries, as well as facing greater numbers and more powerful foes.

Of course, this is also where things can be more difficult for younger gamers, as the challenge of deflecting laser blasts and timing their movements becomes fast and frenetic. It can be a bit destructive and deadly, too. For instance, Cal gets the chance to pilot and shoot from the cockpit of a giant armored transport (an AT-AT in Star Wars parlance), blasting terrain and troopers.

Things can explode at times in huge fiery eruptions. There’s even something of a brief torture scene as a female captive cries out when hit by painful blasts. And young lightsaber wielders can slice a beasty in half or, in some cases, lop off an enemy’s hand. There’s no blood or gore at any point, but still it can be a tad grisly when, for instance, a giant spider creature leaps out and you leave it in two sizzling chunks on the ground.

If the T-rated violence here can be a bit intense at times, I’m pleased to report that there aren’t too many language worries to navigate. Someone calls out, “Get his butt!” Another person says that something is a “h— of a plan.” And I saw one written use of the word “b–tard.” But that was it.

In fact, the biggest drawback from a parent’s perspective might be the Force and Jedi side of the story. The game takes time to talk about the monk-like faith element of the Force-believing Jedi order. We also hear discussions about the great mystical power of the Force being a temptation that can lure people to the Dark Side. Of course, those elements might also open the door for some parental discussions of faith (along with thoughts on other game themes of friendship, hard work and perseverance) if a mom or dad were playing alongside their youngsters.

Those few detractors aside, though, there’s a lot to enjoy here. Fallen Order may well be the best gaming depiction yet of what it would feel like to be a young, slightly bewildered Jedi … in a world that desperately needs a hero.