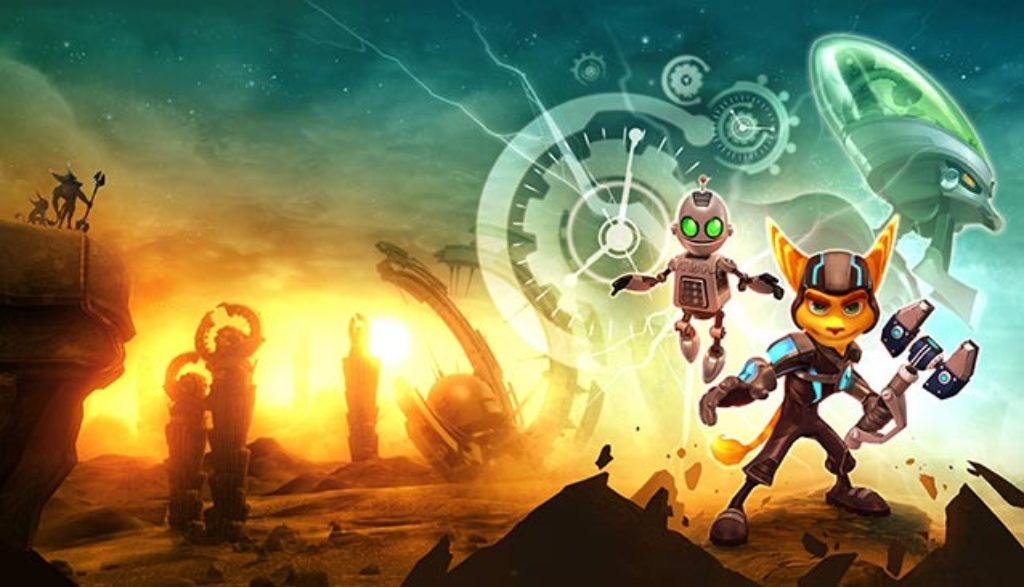 Look up goofy and lighthearted action video game in the dictionary and … you probably won’t find anything. But there ought to be a description of a certain fur-covered Lombax and his metal-plated pal. Since 2002 they’ve been either prevailing against bad guys with exotic weaponry—disco-dancing bomb, anyone?—or knocking ’em dead with tongue-in-cheek quips.

The third and concluding title in the Future series, Ratchet & Clank Future: A Crack in Time, starts out with a brief summary of events from the past two games. In short, robotic sidekick Clank is in the clutches of evil Dr. Nefarious. Cat-like Ratchet has teamed up with a bombastic, bigmouthed superhero named Captain Qwark in an attempt to scour outer space for his metallic buddy. Along the way, all three must work to save the universe from yet another diabolical plan of intergalactic tyranny.

Divide and Cackle
If you’ve played Ratchet & Clank before, you may be wondering how splitting up the game’s two main characters will impact the fun. How can Abbott tell a joke without Costello? How does Siegfried tame a tiger without Roy? Is it even possible for … oh, you get the point! Ratchet and Clank just belong together, right? Apart, they’re both duds, right? Wrong. By separating these two, A Crack in Time becomes the most entertaining and fluid title in the franchise.

Ratchet is hopping from world to world to find clues as to Clank’s whereabouts. And along the way he defends himself by accessing and upgrading an arsenal of crazy third-person shooter weapons. There are efficient munitions such as shotguns or sniper rifles that will reduce his enemies to their nuts-and-bolts basics. (There’s no blood or dead bodies in this Milky Way.) But the real fun is in using the more creative hardware that takes out bad guys with sound waves, opens space-time rifts so extra-dimensional beasties can ensnare them or maybe turns them into chattering monkeys.

A new form of gameplay this time around is the ability to pilot Ratchet’s sleek spaceship on side missions to various galaxies, planets and meteorites. During these star-hopping joyrides, gamers also get a chance at some pumped-up, arcade-style target practice with enemy ships and hurtling space debris.

Probably the most entertaining and challenging side of play lands squarely in Clank’s creaky lap. The robotic good guy, er, winds up inside a giant clock at the core of the universe where he has to solve a series of time-based puzzles involving his own time clone!

Bad Kitty?
So what takes this bundle of deep space chaos out of the world of E and into E10+ territory this time? It’s mainly the laser blasts, whizzing blades and slam-bam explosions. And some of the dialogue can stray across the extraterrestrial line into subjects it probably should have avoided. A radio ad, for instance, talks about a set of pictures that a wife didn’t want her husband to see. And a character with an Irish accent hiccups in a drunken manner.

Still, Ratchet & Clank Future: A Crack in Time won’t scratch up your family room furniture too much. Dr. Nefarious will always be out to destroy the universe, but he’s not out to traumatize young gamers who come back for another zany tour of the cosmos.