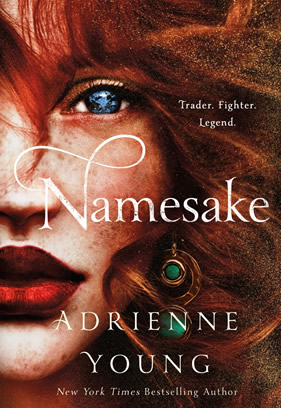 Namesake follows up on the story of Fable (that began in the book of the same name),the 17-year-old daughter of the most powerful trader in the Narrows. Fable has just found her way to freedom from her powerful father’s entanglements. She’s found a new ship, a new crew, a new love. But all that is short-lived when she’s soon kidnapped and becomes a pawn in a notorious thug’s scheme. And she must figure out how to get it all back.

In the first book of this series, Fable, the story’s fiery-haired protagonist, had a lot to overcome. At 13, she had been abandoned on a horrible little island by her sea-trader father and left to fend for herself. And with hard work and determination she did just that. While fighting off thieves and cutthroats, she scrabbled her way to a berth on a ship called the Marigold.

Fable had somehow found a ship, a crew and a first love. And at the same time, she was finally able to disentangle herself from the long-reaching tentacles of her father, Saint, the most powerful and heartless trader in the Narrows.

But now, just as Fable has finally gotten a glimpse of true freedom and true love with a wonderful man named West, it’s all snatched away once more. She soon kidnapped by the thuggish Captain Zola, her father’s staunchest rival in the Narrows. She knows that she’s the cheese in some twisted mouse trap that Zola is scheming.

As the days pass and she gains information, however, Fable realizes that there’s so much more than just a rivalry with Saint in play with Zola’s conniving ploy. There are things about her beloved West that she never knew. Secrets of her deceased mother are in the mix, too. There are even ties to a powerful person named Holland, the greatest and most calculating gem trader in all of the port cities. And in some yet unknown way, everything leads back to her: a young nobody who owns, quite literally, nothing.

Fable is still in the dark, but one thing is sure: She needs to be listening carefully, thinking quickly and using whatever meager skills at her command to start making her own moves on the chessboard of happenings around her. Fable may not have a close relationship—or any relationship—with her powerful and brilliant father. But she’ll have to call upon every ounce of savvy she’s inherited from him to beat every one of these sea-going schemers at their own game.

In this fantasy world, some sailors still believe in mythological creatures. But we see very little of that in this book. In fact, Fable’s sense of her mother’s spirit in one deep sea area—a sensation that is later determined to have been caused by something completely different—is the only real spiritual reference made.

Fable’s hard-edged father is back and a bit more approachable this time. In fact, he and Fable find some common ground and even take steps to sacrifice for each other as they slowly rebuild something closer to what we might describe as a relationship. Fable’s mother, Isolde, is a key to this shift. As her secrets are revealed, Fable begins to more clearly understand the twisted world she’s a part of and why some decisions were made.

We find out that West, Fable’s love interest, is much more like Fable’s father than she ever realized. He’s kinder in some ways, but he’s also made deadly and far-less laudable choices that he fears will drive her away from him.

[Spoiler Warning] We eventually learn that the incredibly wealthy and powerful Holland is Fable’s grandmother whom she’d never met or known about. And she is a deviously calculating, powerful individual who’s used to snuffing out the life of anyone who gets in her way. She eventually offers to make Fable her heir, but only on her terms. And even when Fable is willing to walk away from all that wealth, Holland still manipulates the situation to her own benefit.

People drink the beer-like beverage Rye on occasion and in some cases get tipsy from it. A sparkling wine called Cava is consumed at a high society gathering.

The world of the Narrows is a dark and violent place. And this time around, we also visit the high-port city of Bastian—a much more cultured and polished metropolis that still masks its own deadliness.

A man is pulled out of a room and killed. We read about a small amount of blood trickling under a closed door. Fable watches as someone in a hammock above her is knifed and then carried up-deck to be thrown overboard. Fable also gets attacked by someone and nearly drowns underwater. The man rakes her leg across sharp coral while trying to strangle her. In another scene several people nearly drown when getting caught in the water during a quickly rising storm. Fable breaks the bones in another woman’s hand and then holds a knife on her.

West reveals his violent past to Fable. He tells her that as a 14-year-old, he strangled a man to death to protect his family. We’re also told that West hurt or killed people while in Saint’s service. And we hear of him attacking and setting fire to ships as he tries to rescue the kidnapped Fable. Throughout this high-seas adventure, a constant sense of peril hangs in the air around the various seaports.

Fable is manhandled and abused (though never sexually). At the very beginning of the story, she’s roughed up and knocked out by several men in a dark alley; she wakes bound with ropes to a masthead.

Two of the male crewmates onboard the Marigold are a couple. They kiss once. This tale, however, is very much Fable’s romance, as well as an adventure. In the previous book, Fabel and twentysomething West became lovers. And during their earlier separation here, she thinks back on his scent and the feel of his skin. Upon reuniting, the pair embrace and kiss several times. And there is one lovemaking scene that lightly describes their nuzzling caresses. For the most part, though, the novel doesn’t look closely at any sexual interactions.

What do you think this story is saying about family? Which people in Fable’s life could actually claim that title? Fable is an older teen, but she’s still a teen. What did you think about her romance with the older West? What if the same kind of feelings popped up in your life, how would you handle them?

What lines did Fable cross that you might not? What do you think this book is saying about working through the scars and great losses in our lives? Do you think you could have done all Fable had to do?

Like the first book in the series, Namesake is an immersive adventure with a likeable female lead. And it could easily be seen as a tale of female empowerment and intelligence working in a fictional world filled with the uber-powerful and the powerless. At the same time, Namesake’s world is often dangerous and lawless. And the emotional choices made here, while fictional, aren’t always as morally well founded as some parents might want to promote or support. Fable is still a teen, but she’s making very adult decisions in every aspect of her life, including the area of her sexuality.