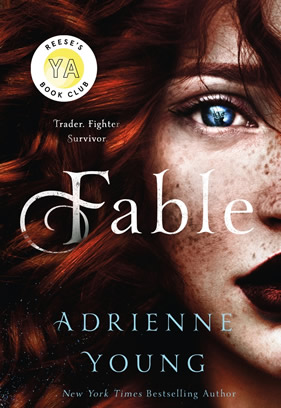 Fable introduces us to the 17-year-old daughter of the most powerful trader in the Narrows. Young Fable has only ever known the sea as her home. But the day after watching her mother drown in a terrible storm, her father abandoned her on an island filled with thieves and cutthroats. She must use what abilities her mother taught her, learn to make her way through a treacherous world and claim what is rightfully hers.

“You weren’t made for this world,” 17-year-old Fable’s father told her. She never fully understood what he meant by that. She simply took it as a strange explanation for what he eventually did to her. And all that he’s forced her to endure over the last four years.

You see, four years ago, Fable’s mother died in a shipwreck during a terrible storm, their vessel breaking in half and sending nearly everyone onboard to a watery grave. Fable and her father, Saint, however were two of the few who survived the maelstrom.

Saint is one of the most powerful traders in the Narrows. And as such, the sea was the only life that young Fable ever knew. But that all changed the day after her mother’s death. Saint promptly took Fable to a small island filled with thieves and cutthroats and abandoned her there.

“Why?” Young Fable croaked when her father put a firm hand on her shoulder and said that she was staying behind, alone, on that horrible little island.

“Because you weren’t made for this world, Fable,” he repeated and stepped into a small skiff to sail away. “You make me a promise and I’ll give you one. Survive. Get yourself off this island And the next time I see you, I’ll give you what is yours.”

That was all he had to offer. And in the four hard years since, Fable has struggled to fulfill his words in a nasty world where every good thing you gain is stolen from you, and every precious morsel of food must be protected or hidden.

Besides those last fateful words, Saint had also given Fable, however, five rules to live by: rules she had been reciting from the time she was big enough to climb into the masts with her mother.

Keep your knife where you can reach it.

Never, ever owe anyone anything.

Always construct a lie from a truth.

Never, under any circumstances, reveal what or who matters to you.

Those may seem harsh lessons from a parent. But those are the things that have kept Fable alive for the last four years. She’s learned to make her way as a dredger: a diver who digs semi-valuable stones and abalone from the reef and exchanges them for a few coppers. And she’s learned to hide away what little treasure she may gain in the hope of someday putting this island of torment behind her.

Someone with a bit of wisdom might have told Fable to forget her father. Forget his words and his offers. Forget everything of the past and find a way to survive now, a simple life to live.

And neither is she.

Being a fantasy world of seaman and people who are constantly at odds with the unpredictable elements around them, there is talk here of “sea demons” and other mythological creatures that are believed to cause anguish. But we never see any actual creatures.

One of the crewmates on a ship that Fable eventually gains access to also feeds fish regularly to gulls and other seabirds that flock in to “honor the dead”—the belief being that “seabirds were the souls of those who died at sea.”

Fable’s father is the only example of “parental authority,” and he is a decidedly bad and hard-edged one. It can be said, however, that he honors his word. Most everyone else in the Narrows doesn’t. This is a sea-going fantasy world filled with cheaters and crooks. And everyone who ventures out alone does so at their own risk.

A man named West, however, represents a different kind of authority, being the captain of the Marigold, a vessel that Fable buys passage on. Like everyone else in the Narrows, he’s a man with a stern exterior and his own agenda. But we soon see that he gives more of himself than most, and he tends to secretly look after those in need.

There’s use of the word “b–tard,” but nothing else that might be considered typically “sailor worthy.”

The crew and others drink a rye-derived beverage on occasion. And in some cases, they get quite tipsy from it. A disappointed Fable drinks to excess one night and gets drunk to the point of passing out. She pays the painful physical price the next day.

The world of the Narrows is a dark and violent place. People are slashed or stabbed by small knives. A man is bound and put in a trunk, then thrown overboard to drown. We hear of someone hanging himself and of a woman having her face scarred by a red-hot knife blade. And there’s a constant sense of threat and danger that hangs in the air around the various seaports.

Fable gets manhandled and abused (though never sexually). She has her lip split open and left gushing. One time, she’s roughed up and knocked out by several men in a dark alley, and she wakes bound with ropes to a masthead. She regularly cuts her back or hands on ropes, masts and sea reef coral. And through her we get first hand evidence of how hard and dangerous life is in this world. Though, in most instances, she gives as good as she gets.

Two of the male crewmates onboard the Marigold are secretly gay lovers. They keep that relationship private, and we never see it expressed physically (except in one case where one the men risks his life to save the other in a storm), though everyone onboard knows of their connection and accepts it.

People aboard the Marigold tend to think that Captain West and a female crewmate are lovers. But in truth they’re brother and sister. West and Fable, however, have a very slow brewing romance that culminates in some impassioned kissing and implied lovemaking that the narrative cuts away from. That said, the lead up to that encounter certainly suggests what’s about to happen as West and Fable touch and begin to remove garments, details that have a sexually provocative vibe even if the act itself ultimately takes place “off camera.”

What do you think this story is saying about family? Fable learns a number of hard-learned lessons here. But what did you think about the things her father was trying to teach? How could they have been handled differently? What did Fable’s father mean when he said, “You weren’t meant for this world”?

What do you think the author was saying about learning from the difficult things of life? What parts of Fable’s struggles might be applicable to our world? What moral or ethical lines does Fable cross that you wouldn’t step over? What about West and Willa? What responsibilities do brothers and sisters have to one another?

What do you think this book is saying about working through the scars and great losses in our lives? Do you think you could have done all Fable had to do?

This is an immersive story adventure with a likeable lead. Through her hardships and struggles, the book ultimately emphasizes female strength, intelligence and empowerment that young readers can admire. The only drawback being that some of the choices in this hardscrabble world aren’t always moral ones.