Want More Fun and Games in Your Life? Here’s Five (More) Family-Friendly Board Games to Consider 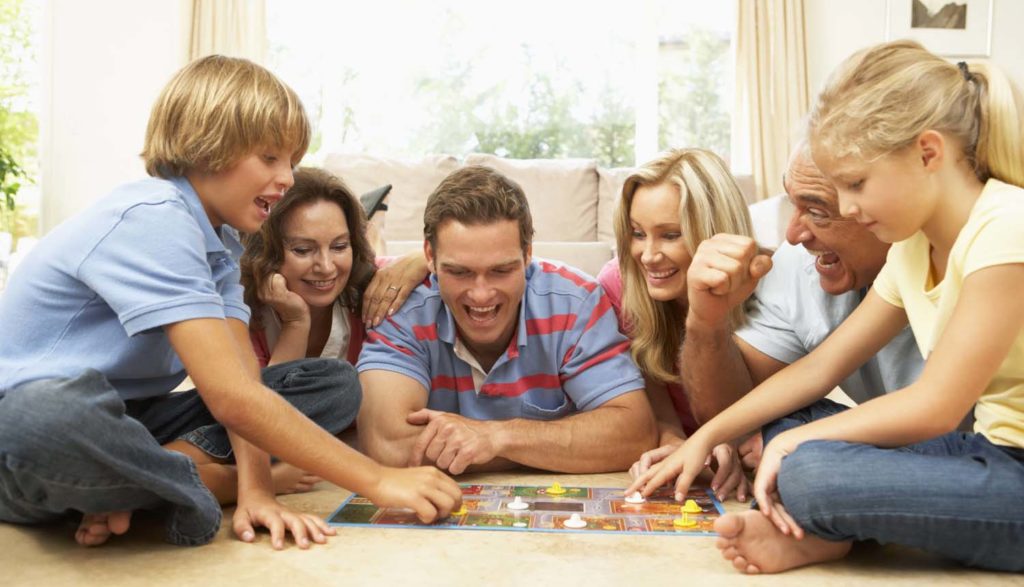 Okay, okay. So you’ve purchased all five of the family-friendly board games we previously recommended, and you’ve played them into oblivion to the point where everyone’s tired of guessing color schemes and speaking in one-syllable phrases.

As an avid board game collector, I get it.

But also as an avid board game collector, you’re in luck, because that means I have another five certified family-friendly board games to strain your wallet and test your wits (and throwing arm, as an entry below will prove). So gather your family ‘round the table, and consider bringing one of these five games, too.

Cards are flying everywhere. You’re just trying to find a match in order to score some points. Suddenly, out of the corner of the table, someone shouts “burrito war!” Your hand reaches out frantically to grab one of the two foam burritos. Too slow. You can only watch in horror as the burrito you so desperately needed rises in your relative’s hand before flying directly for your burrito-less person.

Another game by Exploding Kittens, Throw Throw Burrito pits players against one another in a burrito-themed version of Spoons. Players pass cards clockwise around the table as they search for matching cards to play down for points. However, some cards require special attention. Cards aptly named “Burrito Duel,” “Burrito Brawl” and “Burrito War” cause the game to descend into a frantic frenzy as players attempt to peg one another with a foam burrito, causing the victim to take an infamous burrito bruise and lose a point.

If you’ve ever played Spoons but always wished you could throw the silverware while you played, Throw Throw Burrito, the “dodgeball card game,” fulfills that oddly specific desire of yours. If you’ve never wished that, this game may make you realize that you should’ve. For families who want to combine strategy with accuracy, we recommend obtaining a copy of Throw Throw Burrito.

Watching an island sink into the ocean might be interesting … if not for the fact that you’re still on it. And you know you should probably leave, but there’s still treasure to find! Let’s just hope that you’ve given yourself enough time to escape …

Forbidden Island is a cooperative game where players work together to find loot and escape before a sinking island takes them down with it. Strategize together to plot the best course to secure four treasures, and then get everyone back to the escape helicopter.

Like other cooperative board games, players play against the game itself. As time goes on, more and more of the island will sink, forcing the players to reconsider paths and strategies as vital resources sink into the watery abyss below. Children will learn how to work with others in order to succeed, and the game will also help them learn how to reformulate plans as old ones become unsustainable. For families who want a game where they all win or lose together, this game will fulfill that desire.

Everyone knows what the word is…except for you. They can’t write down the word, but they can help you guess it. One person’s whiteboard says “hill.” Another’s says “peak.” One more says “Everest.” Two people sit with nothing on their boards. You gulp as you consolidate these clues into a single answer: mountain. Everyone cheers—you guessed it!

In Just One, just one person doesn’t know what the word is, and everyone works together to get them to guess it. However, everyone else is only allowed to write just one word. What’s more, there can be just one rendition of the clue, so if you and another player write the same clue, it gets erased entirely.

Just One commits players to think about what words might help another person guess well while also trying to be obscure enough so that their clue isn’t erased due to being a duplicate answer. As a team game, players will want to think about what words the guessing teammate might connect the answer with. This game helps children begin to think about how others process information, subtly teaching them better communication and empathy skills. For families looking for games requiring cooperation and communication, Just One will work wonders.

In most games, cheating isn’t allowed. But in this game, cheating is required! You’re trying to be the first to get rid of your cards, but some cards can only leave your hand by cheating. Stuff it up your shirt sleeve, throw it over your shoulder or discretely slide it under a tablecloth—just don’t get caught by the guard bug!

In Cheating Moth, players race each other to be the first to get rid of their cards. In the game, players place cards clockwise into the middle of the table based on the number of the previous card played. Additionally, some special cards require players to take cards or perform actions. For instance, playing a mosquito forces everyone to slap the card, and the slowest player must take a card from everyone.

But some players may have a moth in their hand, and moths can only be gotten rid of by means of cheating. The only problem is that one player has the guard bug card, and they’re specifically tasked with detecting and awarding extra cards to anyone who they catch cheating.

Cheating Moth takes Uno and gives it a unique spin. For families looking for a short and fun deception game (as long as they don’t take that deceptive streak into their real lives!), Cheating Moth will fit nicely on their shelves.

The person two seats down from you draws a straight line on the paper. Everyone nods their heads in agreement. The person one seat down from you draws another line directly next to it. Everyone nods their heads in agreement. You hesitate as you put your pencil to the page. You see, everyone’s working together to draw one prompt. You just can’t let anyone else know that you have no idea what it is.

A Fake Artist Goes to New York is great fun for everyone involved as each marker stroke is heavily scrutinized and analyzed. Players will laugh at how even players with the prompt seem suspicious when they draw something others had never envisioned. For families who enjoy drawing games, this might be one to add to their repertoire.