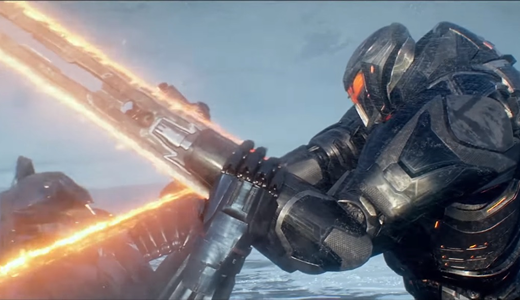 Black Panther is incredibly strong, ludicrously fast and wears an outfit of pure vibranium. (That’s, like, a big deal for the three of you who haven’t seen the movie.) But even Marvel’s talented superhero was no match for a handful of 300-foot-high robots.

Pacific Rim Uprising stomped all the way to the top of the weekend box office, shoving  Marvel’s Black Panther off the throne and sticking that teeny-tiny crown on its own Jaeger-sized head.

Granted, it wasn’t a win for the ages—the fiscal film equivalent of a Kansas-Duke game. Uprising earned an estimated $28 million in North America en route to the win, which might be just enough to put a down payment on one of its robot’s metallic toenails. But as we often say here, a win is a win, and it was probably about time that someone cut Black Panther down to size. King T’Challa and company had spent the last five straight weeks at the top of the standings, surveying its myriad challengers below with an increasingly haughty eye. A few more weeks, and the superhero flick would’ve listed “box office No. 1” as its permanent address.

And even as it starts to show a wee bit of age, Black Panther still has plenty to roar about. It slid to second place with $16.7 million, which pushed its total North American gross to $630.9 million. That makes it the highest-grossing superhero movie ever (sorry, Avengers) and pushes it to fifth on the all-time list. (Fourth-place Jurassic World, with $652.3 million, is in its sights). Toss in the $606.4 million the movie’s made overseas, and Black Panther’s collected somewhere north of $1.2 billion.

I Can Only Imagine isn’t competing in the same super realm as Black Panther, really, but it also continues to impress in its own more modest way. Adding more than 600 theaters due to demand, the small Christian film banked another $13.8 million to finish third for the second straight weekend. It’s earned $38.3 million—not bad at all, given that its creators spent just $7 million to make the thing.

The strength of I Can Only Imagine helped spoil the debut of Sherlock Gnomes, which could only muster $10.6 million out of the gate to finish fourth. A bit of an ig-gnome-inious start, I’d say.

Tomb Raider, which finished second last week, fell all the way to fifth with $10.4 million. Game over, man.