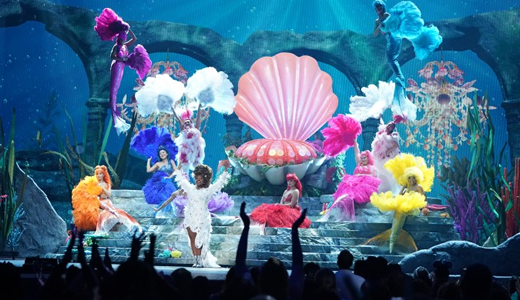 Sad that you missed The Little Mermaid Live! on ABC last night? Yeah, well, you can save your tears. Even though nine million people tuned in to watch Ariel’s primetime return, many reviews were scathing—in part because only parts of it were actually live, interspersed with animated movie clips.

Entertainment Weekly gave the show a D, with reviewer Darren French opining, “I’m not sure how many more live TV musicals we’ve got on the horizon, but I know that The Little Mermaid Live! moved the whole genre one step closer to a watery grave.” And you don’t need to read much further than the title of USA Today’s review by Kelly Lawler: “ABC’s baffling Little Mermaid Live! sunk straight to the bottom of the ocean.”

But if you didn’t turn on Ariel for young viewers last night, that’s probably just as well. The Cincinnati Enquirer (via USA Today) reports on a new study that reinforces much of what we know about screen time and its effects on the development of little brains. Researchers at Cincinnati Children’s Hospital Medical Center found that higher screen use among 3- to 5-year-olds correlated with “lower expressive language, the ability to rapidly name objects or processing speed and early reading skills,” writes the Enquirer’s Anne Saker.

Study author and director of the Reading & Literacy Discovery Center said of the findings,

Screen-based media use is prevalent and increasing in homes, childcare and school settings at ever younger ages. These findings highlight the need to understand effects of screen time on the brain, particularly during stages of dynamic brain development in early childhood, so that providers, policymakers and parents can set healthy limits.

And those reminders are increasingly important, given that 53% of children in the United States own a smartphone by the age of 11, according to the Common Sense Census: Media Use by Tweens and Teens, 2019.

Instagram, meanwhile, is trying to limit potentially problematic content, especially content that could influence teens. In the last two weeks, it has banned filters that promote cosmetic surgery, as well as announcing that it will block content that promotes or depicts self-harm or suicide.

Screens, of course, can be an issue for adults, too. And in the Netflix age, many of us have gotten used to binge-watching our favorite TV shows when entire seasons are released simultaneously. But some are wondering if this once-trendy strategy has fallen out of favor. In his Atlantic article “The Slow Death of the Binge Release,” David Sims notes that some of the new streaming services, including Disney+, Apple TV+ and HBO Max, are returning to the tried-and-true release schedule of one episode per week for original shows.

How’s Netflix responding? It’s reportedly testing a new “speed-binge” feature that can increase the playback speed by .5x to 1.5X faster. Sure, it might make characters sound a bit like the Chipmunks. But if you just want to know how the story ends as fast as possible, Netflix thinks there may be a market. (And who knows, maybe it’ll help Plugged In review more shows, right? Bet they weren’t thinking of that unintended benefit!)

Still, Hollywood filmmakers haven’t exactly responded warmly to that bingey brainstorm. Writer/producer/director Judd Apatow, who co-created the Netflix show Love, tweeted, “Don’t make me have to call every director and show creator on Earth to fight you on this. … We give you nice things. Leave them as they were intended to be seen.”

Right. Don’t make Judd Apatow angry. You wouldn’t like him when he’s angry.

Airlines, of course, have edited problematic content out of in-flight movies for decades. But Delta found itself in hot water after it trimmed scenes from Booksmart and Rocketman that had to do with homosexuality. The airline quickly responded to the criticism, releasing a statement that said, “The studio has agreed to provide a special Delta edit that retains the LGBTQ+ love scenes in both Booksmart and Rocketman that will be on our flights as soon as possible.”

Next up: noise. What noise, you ask? Pretty much all of it. We’re living in an incredibly noisy time—from lawnmowers to hair dryers, rock concerts to earbuds. And it’s killing our ears, writer David Own, author of the book Volume Control: Hearing in a Deafening World, recently told NPR: “When we talk about age-related hearing loss, the assumption is that this is something that happens to old people. It is something that happens to old people—but it’s something that’s caused by things that we do when we’re young.”

Finally this week, an update on Kanye West and his wife, Kim Kardashian. Kanye’s most recent Sunday Service, in Baton Rouge, Louisiana, drew some 6,000 attendees—more than 1,000 of whom reportedly raised their hands “to accept Jesus as their Lord & Savior,” according to Lafeyette Crossroads Church pastor Curvine Brewington. The American Bible Society has announced that it will give away 1,000 free Bibles to those who fill out an online form to “Kanye fans.” Kanye’s ninth studio album, Jesus Is King, debuted at No. 1 on Billboard’s album chart, while all 11 tracks on the album debuted on the Billboard Hot 100 singles chart. And Christianity Today contributor Morgan Lee ponders Kanye’s spiritual journey in the article “Kanye West’s Long, Complicated Relationship with Christianity.”

As for his wife, Kim Kardashian, she’s suggesting that she may begin moving away from suggestive outfits, something Kanye recently criticized. In an appearance on the daytime talk show The Real, Kardashian talked about her wardrobe choices and how Kanye’s recent embrace of Christianity has impacted their family:

He is my husband so I obviously want to honor him and what he’s feeling and he’s been going through this life change. …  We were having this conversation of just, what is too much? And I am a mother of four and I am going to be 40 next year. When is it time to stop?

Kim also talked about Kanye’s changing attitude toward entertainment, saying he’s gotten “a little more strict. … The kids are getting older and he’s very conscious about what we have in the house. We got rid of TVs in the kids’ rooms and removed makeup from North’s room.”

I never thought I’d hear Kanye West and Kim Kardashian advocating for discipline and discernment when it comes to kids’ screentime. But sometimes truth is stranger than fiction, right?