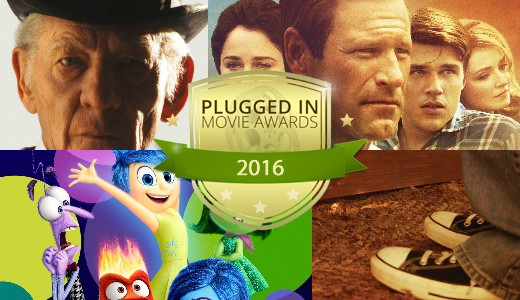 Nominees: Cinderella, The Good Dinosaur, Inside Out, The Peanuts Movie, Shawn the Sheep Movie

Plugged In’s Pick: Inside Out
Despite some strong support for The Peanuts Movie and its wonderful messages about perseverance and being a good guy (if not a particularly good pitcher), Pixar’s colorful, multilayered take on the inner workings of an 11-year-old girl’s mind won the day in this kids’ category … with the Plugged In team knowing full well that this flick may end up being more of a parent pick than a kid fave!

Readers’ Pick: Inside Out
Seems that many of you loved this Pixar movie as much as we did. This movie takes us all through a gamut of emotions, quite literally, but the main one it seems people walk away with is joy.

Plugged In’s Pick: My All-American
In a category typically dominated by big-budget blockbusters (Mockingjay – Part 2 and The Force Awakens were both Top 10 grossing movies for 2015), Plugged In picked a football movie with a small audience but a big heart. My All-American, based on the true story of Freddie Steinmark, is a movie we feel is worth standing up and cheering for.

Readers’ Pick: Star Wars: The Force Awakens
This contest was no contest. While several readers favored the likes of Mockingjay 2 and Tomorrowland, The Force Awakens sped away with this win like a souped up X-Wing (which is sort of redundant when you think about it). Given the movie’s themes of courage, family and trying to do what’s right, we can hardly blame you.

Nominees: The 33, Bridge of Spies, Brooklyn, The Martian, Mr. Holmes

Plugged In’s Pick: Mr. Holmes
Plugged In shunned three Academy Award Best Picture nominees and the deeply spiritual The 33 in favor of this under-the-radar gem. The movie gives us a Sherlock Holmes getting along in years and whose fabled mental acuity is beginning to fade. But thanks to a little help from a young protégé, Holmes finds a way to take on one final case. This is a strong bit of moviemaking, and one almost completely devoid of problematic content.

Readers’ Pick: The Martian
How much money and time should we spend to save one man? In The Martian, the answer is an encouraging “whatever it takes.” Despite an unfortunate smattering of foul language (and some potatoes grown in what Plugged In would call an “other negative element”), this inspiring story of a man stranded on Mars earned some planet-sized support from our readers.

Plugged In’s Pick: Old Fashioned
Coming out last February in a Valentine’s weekend face-off with the controversial Fifty Shades of Grey, Old Fashioned was practically the very definition of counter-programming. It lost that box office battle, sadly. But it won the movie war as far as we were concerned. True to its name, this is an old-fashioned love story, filled with strong messages, sweet romance and some timely, countercultural advice for those looking for love in the 21st century.

Readers’ Pick: War Room
This was an insanely spirited contest with lots of support for all the nominees. But in the end, you chose the Kendrick Brothers’ latest and greatest. Though it was made on a shoestring budget (at least compared with its secular competitors), War Room earned more than a sneaker-full at the box office ($67.8 million). More importantly, it earned its earnestly spiritual way into your hearts.