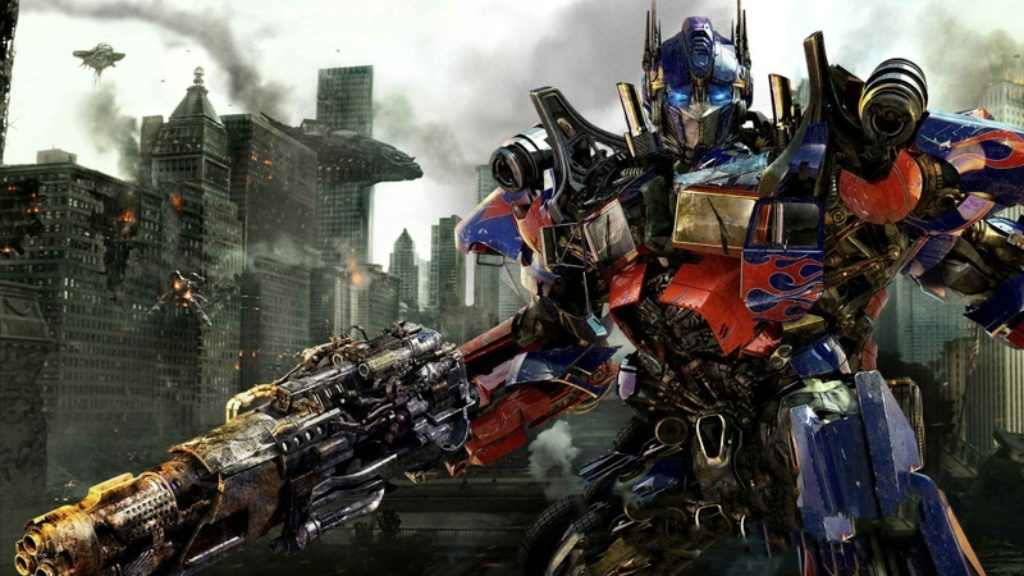 Way back in 1984 a line of shape-shifting toys became the must-have plaything for all self-respecting boys. They quickly morphed into a series of comic books, cartoons and an animated movie. Now, 20-plus years after the fact, they’re the subjects of a wild, effects-filled summer blockbuster brought to the big screen by, among others, Michael Bay and Steven Spielberg.

Thousands of years ago an advanced race of shape-shifting bio-robots populated the planet of Cybertron. Since then, their society has been ravaged by a civil war as clans fought over an all-powerful cube of energy called Allspark. The Autobots wanted it for good; the Decepticons for evil. Through their battles, Allspark got lost in space and eventually crashed down on a then primitive planet Earth. The evil Decepticon leader, Megatron, set off to retrieve the treasure and its power.

Eons later an intrepid explorer by the name of Witwicky is traversing the frigid North Pole and stumbles upon a remarkable find—Megatron, frozen and caught beneath the ice.

One hundred years after that, the explorer’s great-great-grandson, Sam, buys a battered Camaro as his first car. But this car has a habit of turning on its own ignition and flipping through radio channels without anyone being in its driver seat. (It plays songs such as “Sexual Healing” and “Baby Come Back” whenever Sam is wooing his love interest, Mikaela.)

About the same time, a pilot-less helicopter attacks a military base in the Middle East and infiltrates the U.S. defense network. Little does Sam know that he’s driving an Autobot and will soon be swept up in the Transformers’ ongoing conflicts. He must help the good ‘bots find the powerful cube before the Decepticons revive the still-frozen Megatron and take over all mankind.

The Witwicky family motto is, “No Sacrifice, No Victory.” It was handed down from Sam’s great-great-grandfather. Throughout the film this credo is raised as Sam, Mikaela, the Autobots and human soldiers all must make a choice to sacrifice themselves for others around them. When the Autobot leader, Optimus Prime, is chided by his evil counterpart for protecting measly humans, the good ‘bot retorts, “Freedom is the right of all sentient beings” and “We cannot let the humans pay for our mistakes.” At one point he assures Sam, “I will sacrifice myself to save you.” And later, Sam puts his life on the line for the robots as well.

Mikaela talks about her devotion to her father. Captain Lennox speaks passionately about going home to his wife and holding his new baby daughter. Sam records what he thinks may be his last message to his family, speaking of his love for them. Sam’s father moves to protect his son when special agents want to grab him, saying, “You’re not taking my son!” (The agents arrest everyone.)

Mostly just clichéd expressions: Mom tells Sam, “For the love of God, drive safely.” As Sam’s car rotates its radio tuning dial, we hear an evangelist say, “Like visitors from heaven. Hallelujah!” When fiery objects crash to Earth, a young man exclaims, “This is a hundred times cooler than Armageddon, I swear to God.” After the military base is attacked and destroyed, the Secretary of Defense says, “Our prayers are with the families of these brave men and women.”

A number of girls are dressed in bikinis at a party. Several women (including Mikaela) wear low-cut tops and show cleavage. As Mikaela leans over to look at a car engine, Sam (and the camera) takes a long, close look at her exposed stomach and back. He tricks her into sitting on his lap. And they’re shown cuddling on the hood of his car. No surprise, then, that when one of the Autobots scans Sam it reports, “The boy’s pheromone levels indicate that he wants to mate with the female.”

While Sam fights with a small robot, it rips off his pants. Sam and Mikaela force an agent to strip down to his boxers and then handcuff him to a post. Soldiers shower. (Bare torsos are seen.) And Mikaela laments, “I’ve got a weakness for hot guys with tight abs and big arms.” References are made to “hot” criminals, chagrined virgins and “hos.” When Sam mixes up a sentence, the word “ride” takes on a sexual connotation.

There are many battle scenes, some between humans and transforming robots, some pitting robots against robots. And although much of the violence is broad comic book-style crash-bang action, more than a few of the scenes between Decepticons and military personnel are intense and contain lots of gun and missile fire.

While there is no display of copious blood or open wounds, people are constantly running away from the destruction around them and many are crushed by debris, blown up by bombs, impaled, tossed away by robotic pincers or batted aside by the gigantic mechanical Decepticons. Buildings are demolished, vehicles crushed and roadways crumbled. While chasing Sam and his metallic compatriots, one huge robot rips through a bus on the highway. The vehicle is torn in half and erupts in a ball of flame. (We don’t see the unfortunate passengers.) Some of the robots are smashed or broken (one loses its legs) and some are “killed.”

A small Decepticon shoots several people with sharp ninja star-like objects. Sam is thrown around and battered by a police car. He smashes into a parked car’s windshield. And he flips over his bike’s handle bars. Mikaela grabs an electric saw and hacks a small robot into pieces. A guy running from the FBI smashes through a glass door.

Transformers contains an unexpectedly high volume of vulgarities, boasting about 10 s-words and four or more uses each of the words “h—,” “a–” and “d–n.” “M—–f—er” is cut off in mid shout twice. The insult “b–ch” shows up once. There are crude references to urination. And an older woman flips her middle finger to her adult son.

God’s name is twice combined with “d–n.” “Oh my god” is exclaimed about a dozen times.

Sam’s dad drinks a glass of wine. Sam’s dog has a broken leg and Sam gives the animal prescribed pain pills. Later, the police find the pills for “Mojo” in the boy’s pocket and ask, “Is this what the kids are taking nowadays?”

The President of the United States is depicted in a somewhat demeaning light as he asks a flight attendant, “Could you wrangle up some ding-dongs, darlin’?” In fact, many authority figures are stereotypically portrayed as either incompetent or belligerent. A policeman interrogating Sam sees the youth look at his gun and says, “You eyeballing my piece? Go for it. I will bust you up!” And a government agent holds his badge up to Sam and Mikaela, saying, “This is my do-whatever-I-like-and-get-away-with-it badge.”

A female computer analyst steals a secret code. A young man screams at his grandmother to shut up. And Sam’s dog urinates on a robot’s foot, inspiring the huge machine to “urinate” on a man in return.

As the projectionist dimmed the lights and launched the first reel for a packed-to-capacity prescreening of Transformers, I realized that there were two different people sitting in my seat. No, there wasn’t anyone on my lap, it was just two versions of me: The sentimental guy and the critical reviewer sat side-by-side in the same skin, both watching carefully, but through two very different lenses.

My sentimental side remembers his 6-year-old son in the bath, swimming through steamy bubbles, locked in Transformer vs. Batman battles. Brrr-chnkkkkk-cluunk-claaacckk! The boy called out transformation sounds with a focused intensity; the fun echoed down the hallway. Through that memory prism, the movie Transformers is a blast from the past, equivalent to finding a box of old toys in the basement and having its contents come to life with CGI perfection. Shattered cars soar and tumble through the air, buildings shake, lasers blast, and gigantic, weighty metal robots crash, crunch and demolish with more vivid realism than any bathtub imagination could conjure.

The hero robots, soldiers and teens risk everything for the good of all and agree that without sacrifice there can be no victory. The cheesy comic book dialogue and humor dampens the violence and the bad guys are evil but never nasty enough to be really scary. The thundering sound effects rattle your seat and teeth. And the cars and trucks and planes are super cool. (Cool enough to elicit thoughts of possible test drives. Which surely gives auto maker GM product-placement shivers of joy.)

But then my reviewer side clears his throat and brings up the point that we mustn’t abandon a level-headed concern with content. For example, Sam’s girlfriend works as hard as anyone to save mankind, but she does it while stylishly revealing a great deal of her tanned and toned form. Goofy teen Sam runs around in a baggy T and jeans, but sultry Mikaela’s every teenage curve is showcased in skintight, cleavage- and midriff-baring outfits.

Having an adult in authority address Mikaela as “you in the training bra” is at least three or four steps over the line. So is a discussion about Sam’s solo sex life. And so are s-words and truncated f-words.

Should we really be OK with Hollywood injecting that kind of vulgarity into a movie about kids’ toys coming to life? Does God’s name have to be abused just because tin cans are suddenly taking on CGI airs?

From wide-eyed innocence to inoculated crassness. That’s a path that’s being trod by just about everything in our culture. From Britney Spears to cartoons on TV to tots’ toys. And no matter how many classic Autobots start popping up on eBay in the wake of this latest big-screen salvo, not even the rose-colored glasses worn by my sentimental side can, um, transform such a significant problem.