That Time I Got Reincarnated as a Slime the Movie: Scarlet Bond 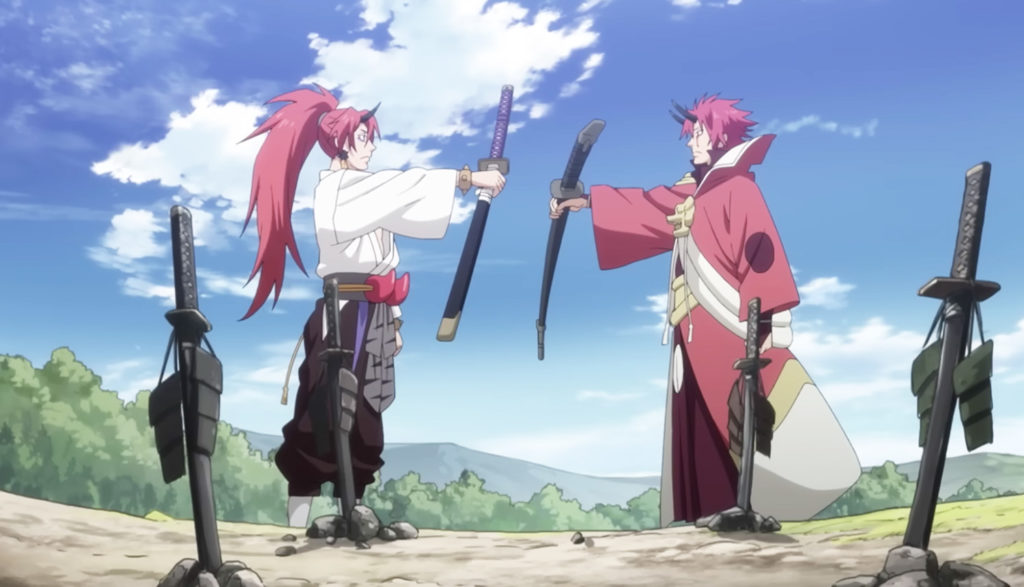 But then his eyes miraculously opened once more and a lovely woman was there. She was giving him a name.

“I will name you Hiiro,” the woman in a queenly tiara said. And that was a daring deed, for humans rarely empower monsters with a name. But this woman was different. She was—and is—indeed a kindly queen, Towa.

Hiiro also learned that this saintly woman had brought him back at great price to herself. For every time she uses the power of her tiara—a magical relic given to her family by a daemon—she herself is poisoned by its curse. And after using it so often to help the people around her, Towa is growing gravely ill.

Hiiro, hates that he added so greatly to this fine human’s decline. And Towa’s state is ever on his mind as he ventures forth with new life coursing through his body. His purpose now is two-fold: First, to continue hunting those who had decimated his Ogre village; and second, to find some way to aid and save Queen Towa. No matter what it takes, no matter what miracle must be conjured, he will find a way to repay his debt.

Little does Hiiro realize, however, that soon, while battling a massive Orc, he will stumble across just such a miracle. He will meet the great Rimuru, a Slime who can take on the form of a man. This is a lowly Slime that has miraculously gathered powerful and utterly faithful companions (including some of his own kind), and founded a city for monsters.

And little does Hiiro understand that when Rimuru is by your side … nearly anything is possible.

As mentioned, Towa is fully aware that she poisons herself when she uses her magic tiara. But she does it anyway to benefit her people and to aid those, like Hiiro, who are in dire need. And though there are a deceitful few who wish to take advantage of her loving self-sacrifice, most others, again like Hiiro, would do anything to serve and protect her.

In that light, Hiiro is later willing to give his life for this human woman. In fact, there are several instances when characters are more than willing to give their all for someone they love. It’s evident that Rimuru’s actions and choices have earned that same love and respect from those around him. And though he’s considered something of a monarch in his monster country of Tempest, he is first and foremost a beloved friend and father figure.

Even the generally deceitful daemons (devil-like characters with spiritual powers who manipulate human lives) ultimately stand by the honorable side of an agreement.

In this fantasy world there are magical powers of many stripes. Curses, fire blasts, dragons, cursed orbs, magical circles, demon lords and daemons are all a part of the tale. And other than curses, those magical imbued elements aren’t all looked upon as negative things. Even Rimuru—a benevolent character who works to befriend and benefit all—is a Demon Lord (in anime, magical, often-but-not-always evil beings) with a variety of extremely powerful (and never explained) magical powers.

There are also several instances where characters are resurrected from the dead. Towa magically draws the life force out of Hiiro’s dying comrades to revive him on one occasion, for instance, and she gives up her own life to revive him on a second occasion. And a daemon resurrects someone as part of an agreement made with a human ancestor.

We also see Hiiro make a sacrifice to a field full of the swords of fallen comrades—pouring a drink out for them—in something of a spiritual ceremony. A daemon tricks a human into thinking she is a goddess. That daemon also declares that humans who dabble with magical powers “must pay a terrible price.”

There are no sexual situations or scenes in this film. However, there are some female characters who wear revealing clothing. Towa, for instance, steps out of a heavily shadowed bath with little on. And Rimuru’s secretary, Shion, wears a low-cut top and regularly exposes a great deal of cleavage.

We see quite a bit of battling with swords and extremely explosive powers or fiery rage. Scores of people are killed in the course of the film.

The very first scene, for instance, is a protracted battle between two groups of warriors wielding razor-sharp blades. There’s not a great deal of gore, but characters are felled and run through by katanas and spears, and the dead fall and are left on a field. A different battle shows armies clashing; characters are slashed at and suspended by wires, where then their bodies are beheaded and quickly cut into large pieces. (We see a brief glimpse of these bloody attacks, but the camera does not linger and we don’t see the aftermath.)

People and sustaining waters and lands are poisoned. A magical curse orb turns someone into a raging, fiery demon-like beast that ferociously demolishes rock walls, city buildings and anything in its way. One character rips open his own chest and slowly crumbles to ash after great magical power has coursed through him.

This film can be seen in Japanese with English subtitles or dubbed in English.

There are several large dinners or banquets where characters drink mugs of a mead-like brew or glasses of wine. Shion tends to always drink too much and get either lightly tipsy or out-and-out drunk.

For all of its deadly warring ways, the film acknowledges the horror and loss of battle. Hiiro rushes home to find his village decimated, for instance, and he kneels and remembers the children running and playing in a now charred playground.

Trusted characters end up betraying others on several occasions. They lie to people and convince them to hurt someone they care about.  But those villains are also held accountable for their deceit and, in one case, deadly actions.

This movie is based on That Time I Got Reincarnated as a Slime light novels, manga and anime, which tell the tale of an average Japanese corporate worker who is killed and then reincarnated in a fantasy world as a lowly monster called a Slime. But through his ingenuity and a special mimicking ability granted to him, he eventually gains great power and dynamic friends—and is given the name Rimuru. He’s beloved by the many monsters he encounters, and Rimuru ultimately founds a nation for them.

It’s important to note, however, that none of this storyline is communicated in That Time I Got Reincarnated as a Slime the Movie: Scarlet Bonds. And without that backstory knowledge and an understanding of its many character connections, this movie will be extremely difficult to follow and understand. (The last two seasons of the anime show are particularly important to the storyline.)

If you do know of that show and its characters (or its manga roots), however, you will find the movie is of a piece with its source material—an adventure that pulls in many of the anime’s characters and sets off to energetically battle treachery and evil. It’s visually impressive and well-crafted. And the movie slaps at prejudice and deceit and lauds those who self-sacrificially embracing others with kindness, friendship and love.

As cartoon-like as it may appear, this isn’t stuff for the tykes. And it may leave some viewers feeling a bit slimy themselves.