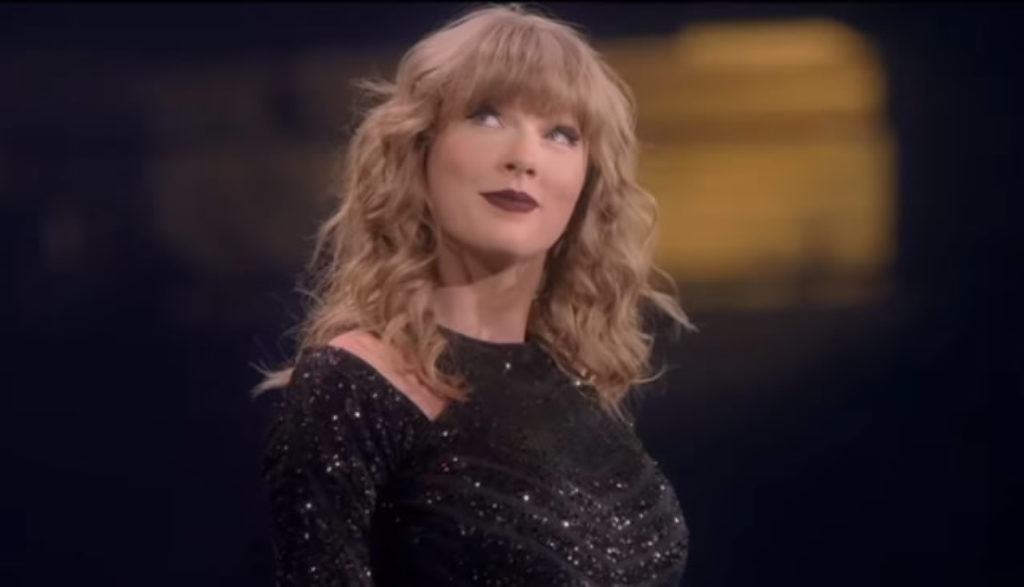 Taylor Swift is not your typical “girl next door” anymore. She’s more like that “all around the world” kinda girl, someone whose popularity has the ability to bring together thousands of fans and sell out stadiums.

And she’s good at it, too. Swift’s latest tour for her sixth studio album, reputation, brought in more than $345 million from concerts across the U.S., Europe and Asia—53 venues total.

But fans who missed the live show can still attend a digital one. Because thanks to Netflix, T-Swift’s last tour lives on. Now, all you need to experience Taylor at her highest grossing tour to date is a Netflix subscription.

A Darker Shade of Red

When I sat down to watch this 2-hour concert film, I had a few expectations in mind, having seen Taylor Swift and Ed Sheeran in Philadelphia on her Red Tour. But this tour was something in and of itself, something noticeably different.

This show is a bit darker. A bit more cinematic. Fully charged. During Swift’s Red Tour, I felt as if I were part of a huge party, filled with confetti and flying beach balls. Nothing but positivity. But the vibe of this streaming concert experience isn’t quite the same, which is evident right from the start.

The film opens with a compilation of rumors and negative opinions of Taylor streaming from the speakers. Set to a gray and black backdrop, the screen shows Swift moving through crowds, at concerts and playing the guitar as a teen. As negative words increase, so does the ominous music. The word “reputation” is repeated over and over. Finally, Taylor stands in a flowing leather dress. And it begins.

The stage glows with red lights that shine through a contrasting black and gray as Taylor’s silhouette becomes the main focus. Clad in a black, sparkly leather leotard she asks, “Are you ready for it?” As gray smoke shoots upward and the bass drops, Taylor swings her hips and makes it very clear that she couldn’t care less about her perceived reputation.

From the start, it feels as if Taylor’s energy on this tour (and album) is built on a kind of defiance. She seems determined to live life on her own terms, despite what others may think. In some ways, that message of empowerment and independence could be heard as a positive one. But not all of her songs are ones you’d want to hear your 10-year-old singing.

Plugged In has chronicled the slow thematic shift that Taylor has made over her career, from the earnest “happily ever after” fairy tale songs of her teen years to something more like “happily never after” in her young adult years. It’s not that she doesn’t want true love; in fact she opens up to her audience about her desire for what’s real in life—and many of her songs express this sentiment. Still, other songs express the ups and downs, the good and the bad and the intimate nitty-gritty of her high-profile romances.

Songs such as “… Ready For It?,” “I Did Something Bad,” “Don’t Blame Me,” “So It Goes,” “King of My Heart” and “Dress” all focus on one thing: sex. On these tracks, Taylor opens up like never before about what goes on with her lovers behind closed doors.

She’s also interested in revenge. “Look What You Made Me Do” and “This Is Why We Can’t Have Nice Things” drag into the light exes whom she feels have stabbed her in the back, as well as voicing her plans never again to be called the fool. Meanwhile, “Dancing With Our Hands Tied” and “Getaway Car” focus on dysfunctional relationships that didn’t have what it took to last.

But just when it might seem as if lust, cynicism and heartbreak are Swift’s only messages these days, the sassy and fun-loving Taylor arrives to sing about a crush in “Gorgeous,” and a man who, it seems, has won her heart for good in songs such as “Delicate,” “End Game,” “Call It What You Want” and “New Year’s Day.”

It’s All About the Show

Onstage, Taylor’s backed by a talented entourage of male and female singers and dancers decked out in various (sometimes provocative or revealing) costumes. At one point, a group of male dancers comes traipsing out, shirtless and banging on drums. Taylor herself changes into multiple outfits that are bold, unique and sometimes suggestive (as are a few of her dance moves). Camila Cabello and Charli XCX join her for a few minutes onstage as well. And there are even quiet moments where Taylor is left alone with a guitar or the piano—purely acoustic.

And amid all the shiny lights, colorful outfits and high-energy choreography, Taylor still forges a real connection with the audience. Her fans obviously adore her. We see some fans crying, while others shout their love from afar or wear crazy attire in obvious attempts to catch the camera’s eye.

Taylor also opens up about the need for real friends and relationships and the importance of pushing through tough spots in one’s life. She gives shout-outs to her crew, and honors the vocalists, dancers and the band that faithfully help her execute the vision. Everyone is made to feel included.

As someone who grew up listening to Taylor, I really appreciate these positive elements in this concert film. Fans who are familiar with these songs may want to bust out their dancing shoes. (I did.)

That said, Taylor’s show certainly isn’t as squeaky clean as it once might have been. Songs deal with subjects such as sex, alcohol and desire. Some lyrics include profanities such as the s-word and “d–n.” And, as mentioned, dance moves can get a bit sultry.

There’s no denying that Taylor Swift puts on a remarkable arena concert, as this Netflix show skillfully documents. But it’s still a show that has some content issues for younger fans, and parents (some of whom may have grown up with Taylor, as I did) need to be aware of those issues before buying a “ticket” for this Netflix tour.