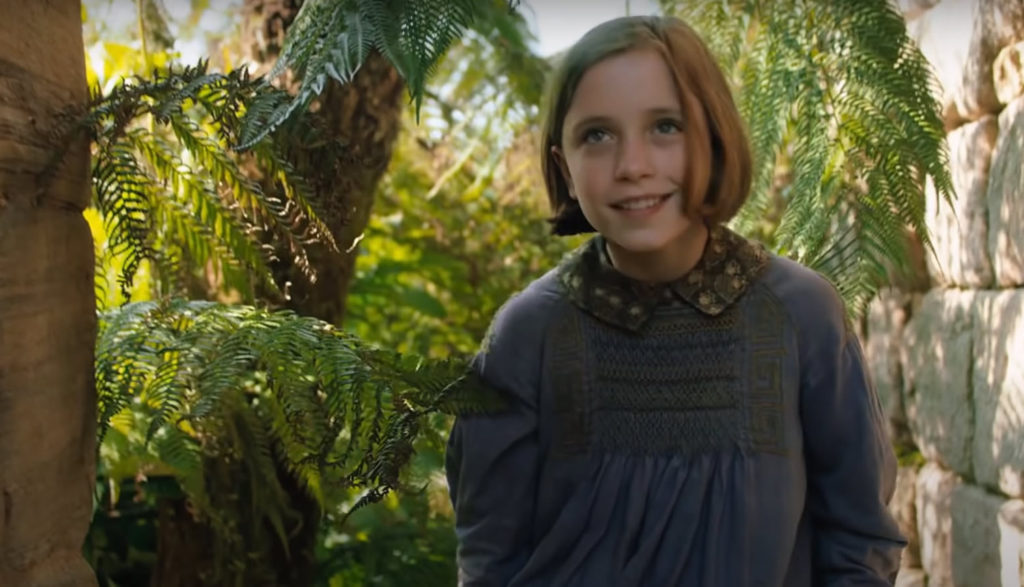 In 1947, India and Pakistan gained independence from British rule. Many of those soldiers and their families who stayed in India during that time were killed, and the children who survived were left orphaned.

Mary Lennox is one of those children.

Obstinate and wounded, Mary is shipped to England after her parents’ tragic deaths. And, although already grieving herself, she enters an estate on the Yorkshire moors where sorrow and death are well known.

Her uncle, Lord Archibald Craven, is the ruler of the estate. A distressed widower, Lord Craven and his house manager, Mrs. Medlock, have only two rules for Mary: one, do not enter certain rooms of the house, and two, cause no trouble.

But Mary, being the adventurous and headstrong girl she is, has no plans to heed their words. Soon, Mary finds Lord Archibald’s son, Colin, locked up in his room. At first, the disabled Colin wants nothing to do with Mary. You see, young Colin is held prisoner by his own marred memories of his mother. And withering away unto death seems easier than facing reality, or Mary.

Yet, Mary will have none of it. Instead, she forces Colin outside of the confines of his room and into a magical garden she’s discovered just outside the estate.

Filled with wonder and enchantment, this garden holds secrets that both Colin and Mary need in order to heal. But the same secrets that have the potential to mitigate their pain are those that have been intentionally locked away by Lord Craven himself.

If Mary has any hope of mending the wounds of her distant family, she’ll need to defy the rules to uncover the memories hidden in the secret garden.

Mary is recovering from a childhood where she felt loved by her father but rejected by her mother. It is clear, through many flashbacks, that her father truly loved her but that her mother suffered from depression and was unable to engage. But Mary has been able to push beyond both that difficult upbringing and her grief to some extent. Although she has a tough exterior, she’s empathetic and truly wants to help those around her.

Mary learns that Colin also feels unloved. As time passes, Mary, Colin and their friend Dickon learn how loved they truly are. Mary and Dickon force Colin to push past his fears and leave the confines of his room. Similarly, Colin forces Mary to confront her own shortcomings.

Dickon’s older sister, Martha, is Mary’s caretaker and a kind one at that. Martha has incredible patience and a gentle, but firm spirit that help Mary learn to see herself as loved and valued.

Many characters learn to move on from their pasts, love one another and mend broken relationships.

Mary tells herself an “Indian myth story” in which an evil demon comes and kidnaps her parents; she does so to cope with the fact that she’s been unintentionally abandoned.

At first, Mary struggles to console herself when she arrives at the estate. She hears the violent wind and believes it to be haunted voices and the ghosts of dead soldiers.

Mary, along with Colin and Dickon, are forced to grow up much faster than normal due to death and grief. In fact, nearly every character in this film is forced to go through unbearable loss.

Mary overhears that her mother and father died. Mary learns that her aunt died of a sickness. Mary and Colin believe they are responsible for their mothers dying. Mary hears gunshots and people screaming while living in India. Mary sees a child who is missing a leg. Mrs. Medlock tells Mary that “army savages” ruined their grand estate.

Mary climbs onto a wall and accidentally tumbles down, knocking herself momentarily unconscious. A home is set ablaze and people nearly die inside. Martha, a household helper, tells Mary that she will be whipped if she breaks the rules.

Mary is left alone in India, in her destroyed and looted home, for days before she is found by British soldiers. After being shipped off to England, Mary tosses her beloved doll in the ocean after being told she’s no longer a child.

Unused to responsibility and having to take care of herself, Mary throws a tantrum when Martha tells her she must dress herself and learn to grow up. Colin similarly throws a tantrum and screams when Mary tries to befriend and help him.

Both Mary and Colin feel abandoned and neglected by their deceased mothers. Colin tells Mary that he “hates” his mother for leaving him alone.

When I was a child, The Secret Garden was one of my all-time favorite novels. I would pretend that I was discovering new, hidden places. Uncovering magical secrets. And, I assume, I wasn’t alone.

The same enchantment from Frances Hodgson Burnett’s 1911 novel, is the same that has inspired multiple directors to bring the book to the big screen. And this recent rendition is by far the most visually extraordinary.

Filled with lovely, colorful images and whimsical moments, The Secret Garden tells the tale of a young girl and her family who have been ravaged by pain and loss.

This remake holds plenty of fanciful scenes that would make any child wish that they too had their own secret garden. What’s more, lessons of bravery, kindness, empathy and resilience are front and center. But with these moments come some mature themes. Violence, while not shown on screen, is referenced. Attitudes and fears creep in, and loss is pervasive.

There is a lot to love here for older audiences, but many themes may be too mature for the littlest of viewers.