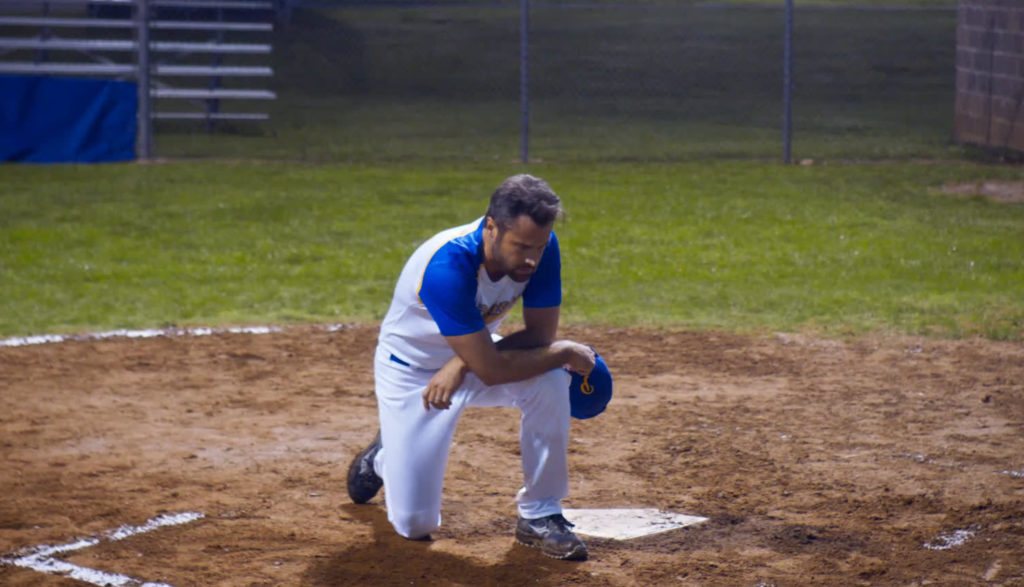 It’s hard to say for sure which loss was worse, so completely interwoven as they were.

Obviously, the sudden death of Joshua Brooks as he rounded third was a blow that his baseball-loving brother, Luke, would never get over completely. Joshua and Luke lived for one thing: the game they loved. The game they always played together, almost as one person. And as their senior year rolled on, they were both on the brink of getting scholarships to keep playing the game, keep running the bases.

But Luke has barely begun to get on with his life when the other shoe drops: He learns that he has the same sudden-death heart condition his brother had. And that, his doctor tells him, means Luke’s baseball days are over for good.

Adrift in a sea of grief and disorientation, Luke heads off to Evangel University. It’s there, studying near the baseball team’s practice one day, that he meets a coach whose providential words will redirect Luke’s sense of calling:

“You know, Luke, for those of us who love this game, it’s pain and glory, all wrapped up together. A few of us grow to resent it, because we can’t find our place in it anymore. But others, well, we just keep searching until we do.”

That inflection point will shape the course of Luke’s life. And as the film jumps forward 20 years, we find Luke happily married to his childhood friend Jessica. And together they’re raising a high school baseball player named Josh (named after Luke’s brother, of course).

Oh, and he’s a dynamite baseball coach, too. Luke’s acclaim as a baseball genius in his small Arkansas town—where both he and Jess grew up—has started to leak out. That’s the kind of thing that happens when you win nine state championships.

And sure enough, one day a man comes calling. A man in a suit—a nice suit. A man named Michael Jamison with an offer Luke ultimately feels is God’s leading: To move to a 6A Texas school district that’ll give Luke a chance to take his coaching to the next level.

He takes the offer and is, at first, thrilled about it. It’s all starting to feel like happily ever after …

… until Luke says a prayer at home base one day and runs the bases in honor of his brother and of God before a game.

Luke is deeply motivated by his faith to be the best coach, and the best influence in the lives of his players, as he can be. Though he gets accused of proselytizing his team, he doesn’t do much of that. Instead, he emphasizes repeatedly the importance of character, both on the field and off, as being more important than winning championships. And it’s not just lip service: He really holds to that perspective.

In one of his early speeches after arriving, he says to his new team: “I’m Coach Brooks, and I love this game. Now, the world will tell you it’s all about winning. That’s what they expect from us. Don’t get me wrong: I want to win. I came here to win, and I will demand greatness from each and every one of you on this field. But greatness ain’t defined by winning. It’s so much more than that. It’s how you conduct yourselves on this field and off this field. It’s about emptying yourself for your teammates. See, I expect us to become a family, a family of young men who carry themselves with character and integrity. You achieve that, you boys are welcome to win all you want.”

Other characters have major positive impact on each other as well. Jess, Luke’s wife, is a staunch supporter of her husband, and she challenges him forcefully when he starts to slip into self-pity. Both of them do a great job of expressing love to their son, Josh Jr. Another character, Sam, is a field custodian who becomes a confidant and encourager to Coach Brooks when things get tough.

With regard to the former, we watch Luke grapple with the question of why God has allowed such difficult things to happen to him, such as losing his brother and losing the ability to play the game he loves. Though the encouragement of key people in his life, including his mother, his wife and his friend Sam, Luke continues to press through his pain and doubts and holds onto his convictions.

The second conflict has to do with the superintendent who hired him. Michael, we learn, wants nothing to do with Luke’s Christian faith. Michael is also deeply offended when Josh Jr. seeks to influence his son, Ryan, toward following Jesus.

As the conflict escalates, the threats to Luke escalate as well. Michael threatens to fire Luke if he doesn’t stop praying and running the bases before games. He then digs up an old city ordinance that prohibits public displays of faith or religion in city parks. The result: Luke gets fined $250 each time he runs the bases. Finally, Michael manages to manipulate the system to have Luke thrown in the local jail—where he keeps on evangelizing and serving the inmates there.

At each moment of escalation, Luke must decide whether he’s going to remain faithful to what God has called him to do. (Eventually, some conservative civil rights lawyers get involved too and offer to help Luke, but he’s not interested in filing suit against the city to win his case.)

It eventually is revealed that Michael and Ryan have had some deep personal trauma of their own that have created animosity toward God—especially in Michael’s case.

At a moment of doubt and discouragement for Luke, an older man tells him, “What if God’s provision for your whole life has brought you to this place to disrupt this moment?”

Near the end of the film, Luke delivers a monologue before stands filled with spectators for a high school baseball game: “Because of Jesus Christ, there is hope. Hope beyond my crushed dreams. Hope beyond my failures. And that same hope is available to each and every one of you. There is a Savior who will fight for you. He desires you. He loves you more than you will ever be able to comprehend. He gave His life for you. And once you’ve experienced that love, it will cause you to do the craziest things in life, like running the bases.”

Various other references to the faith, both visual and verbal, turn up throughout the film as well.

Luke and Jess kiss at their wedding. Luke’s bare shoulders are shown as he showers. Josh Jr. begins dating a pretty and popular girl named Katie, which leads to …

… one of the more intense moments of genuine violence in the film. Turns out Josh Jr.’s teammate Cody Garrison has been trying to get Katie’s attention for years, to no avail. And when Josh sweeps in and sweeps her off her feet, Cody goes off on him after practice one day. He takes a shot at Josh, punching him the face. When Cody starts mocking him for being named after his dead uncle, Josh wallops Cody, giving him a black eye.

As noted, Luke ends up in jail for his faith. A menacing man who’s covered with tattoos and seems to run something of a gang inside the jail motions for his goons to grab Luke and drag him away. We hear Luke scream, and later see him with cuts and bruises on his face after an apparent beatdown behind bars.

Luke forgets to take his medicine and collapses with chest pains as an officer tries to arrest him for violating the town’s ordinance against public religious displays.

And, as mentioned, we see Luke’s brother Joshua clutch his chest, fall to the ground and die as he rounds third base.

Luke hears the story of an inmate whose father was physically abusive to him and who murdered the man’s mother when he was just a boy.

In a moment of contempt, Cody Garrison says of Josh’s story about his name, “God, spare me. Lame.” Someone exclaims that he doesn’t give “two craps” about something. There’s one use of “oh my gosh,” one of “what the heck” and one of “jeez.” Several people call others “idiot.” One man angrily calls another a “moron.”

At one point, we see Michael working at home on his computer with a drink next to him on the desk. When things eventually fall apart for him, he gets very obviously drunk.

After Cody and Josh Jr. trade punches, Coach Brooks disciplines them (with Ryan later joining the two for something he did) by tying them together with a pink rope. It’s played for humor and meant to illustrate how seriously Coach Brooks takes discipline. But it also seems excessively shaming to the boys when they have to stand tied to each other during a baseball game as well, with spectators seeing and mocking them.

Running the Bases asks two important theological questions: What do we do with suffering that is impossible to comprehend? And, how far are we willing to go to stay true to our Christian convictions, even if it costs us our job, our reputation and our dignity?

These are important questions. And as Luke Brooks’ story unspools here, I think a number of points could connect effectively with viewers who are wrestling with similar questions in their lives. That’s because all of us face moments where our faith flags, or our when our commitment to do the right thing sags. We all face moments of tempting, testing and decision.

The value in movies like this one, I think, has to do with reminding us that God is still there, that He cares deeply and that the fight is worth fighting—even if it doesn’t always feel like it. For some viewers, I think Luke’s journey could be a poignant and encouraging catalyst to face their struggles head on (even though others might suggest that the film’s conflicts and resolution feel a bit stereotypically melodramatic at some points, a bit to neatly resolved at others).

As far as the film’s handful of slightly gritty moments are concerned, they never push things past its PG rating. That said, we do get a glimpse of a man bottoming out in Michael Jamison. He gets very drunk and ultimately assaults his son (throwing one punch at him) in a way that reveals how deeply broken he is.

But even for an antagonist as broken as Michael is, we’re reminded that no one is beyond God’s redemptive reach, and that failure and loss never have to have the last word if willing to entrust those difficult things to Jesus.