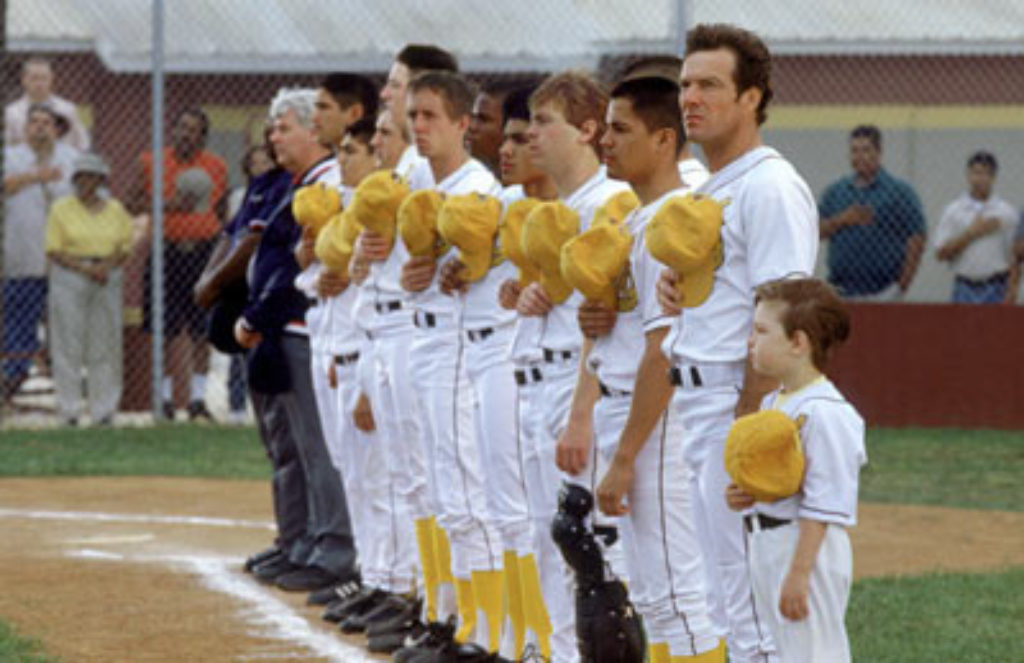 The story unfolds in the heart of West Texas, as Jimmy Morris births his childhood dream to play major league baseball. After pitching his way into the minor leagues, a serious shoulder injury sidelines his career and forces him to create new aspirations for his life. Ten years later, Jimmy is married to a beautiful woman named Lorrie and has three adoring children. He’s a science teacher and baseball coach at the local high school. His team tries hard, but they struggle to put marks in the win column. After Jimmy gives the boys a pep talk about dreams, his team fires back with a challenge of their own: If they win the district playoffs, Jimmy has to try out for the major leagues—again. Jimmy’s players buckle down and work like crazy to make good on their end of the bargain. And as always, practice pays off. They win the district playoffs. Now Jimmy’s got to hold up his end of the deal. So he attends an open tryout with the Tampa Bay Devil Rays. Between changing diapers on the sidelines and coloring pictures with his daughter, this 35-year-old family man almost gets laughed off the field. But that’s before he blows everyone away with his 98mph fastball. Jimmy gets signed and quickly moves up the ladder, ever closer to his big league dream.

positive content: In an entertainment culture where family unity is not a priority, The Rookie breathes a breath of fresh air. While on the road, Jimmy learns that all he ever wanted, he already has. Also, moviegoers are encouraged to dream big, try their best, and never give up. Jimmy tells his high school baseball team, “I’m talking about wanting things in life … having dreams. If you don’t have dreams, you don’t have anything!”

Although Jimmy doesn’t have a healthy relationship with his father, he does everything he can to be a positive role model and mentor for his son, Hunter, who acts as team batboy and idolizes his daddy in every way. While traveling with a minor league team, Jimmy is harassed by other team members for being in the phone booth too long. He retorts that he was helping his son with his homework. And home is exactly where Jimmy’s heart is. While on the bus, his eyes moisten as he opens a yellow construction paper letter from his daughter telling him how much she loves her daddy. On the mound in the middle of a game, he looks up in the stands and sees a boy and his father chatting together. His eyes tell all: “Why am I standing here far away from my family playing baseball instead of being at home holding my son in my arms?”

Jimmy and Lorrie have a genuinely loving, self-sacrificing and stable marriage. You can see the tender love radiate between them. Lorrie sticks by her husband through each decision he makes, and shows faithful submission and unconditional love. When Jimmy is offered a coaching position at another school with a much higher salary, Lorrie is excited and expects him to accept. But Jimmy turns it down for a $600-a-month salary with a minor league baseball team. She disagrees with his decision, but she continues to support him in the pursuit of his dream.

Jimmy, raised by a strict unsupportive Navy officer, takes a big step in initiating a renewed relationship with his father by seeking his advice concerning whether or not he should join the minor league team. Jimmy demonstrates forgiveness. And his father ultimately expresses regret for not investing more in his son’s life.

spiritual content: Jimmy is seen taking a leadership role by huddling up to pray with his high school team before the big district playoff game. He thanks God for bringing them through the season without injury. The film is bookended by a story about two nuns whose blessing on a parched landscape yielded oil.

crude or profane language: While on the field, one player misuses the name of God (it’s the second time God’s name is used as an exclamation). Four mild profanities (one of which is sung in a song) include the words “h–l” and “d–n.”

drug and alcohol content: Jimmy and his wife have a glass of wine with dinner. At a birthday party, Jimmy and several of his friends are seen drinking beer. Several ballplayers drink beer at a bar.

other negative elements: While the team is in the locker room rejoicing over their win, one of the players grabs his crotch.

conclusion: Based on a true story, The Rookie is a heartwarming, inspirational drama that is as much about family as it is about baseball. The real Jim Morris told Plugged In, “In my twenties, I was a self-absorbed person who thought of nothing more than what I wanted and nothing ever worked out. Once I started thinking about other people’s feelings and what they had in their hearts, everything was bigger than me at that point and that’s when things started to happen to me.” Jim is now an inspirational speaker who devotes his time to training and mentoring children.

With very little objectionable content (a bit of alcohol use and a few mild profanities make a PG rating seem more appropriate than the assigned G), this terrific family film celebrates hard work, community, perseverance, unconditional love, second chances, and the need for spouses to share a common, unselfish vision for their home. Lorrie and Jimmy’s relationship is a picture of unity and self-sacrifice. Also, there’s a sharp contrast between healthy and unhealthy approaches to fathering. Part Rocky, part Bad News Bears, part October Sky, The Rookie is guileless entertainment with lots of heart and plenty for parents and teens to talk about.