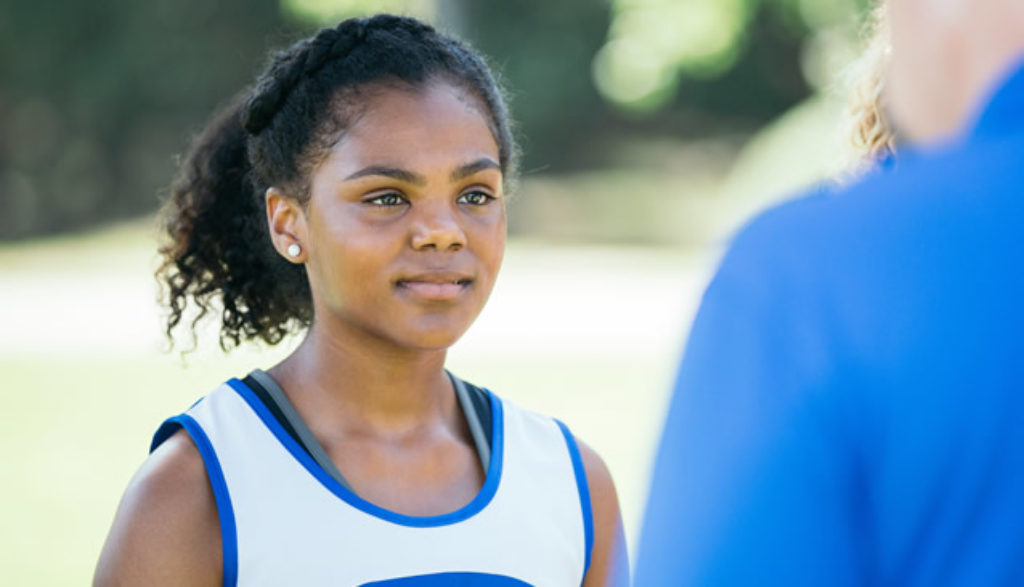 If I asked you who you are, what comes to mind? A basketball coach? A cross-country runner? A diabetic patient? Or perhaps a child of God?

When a local manufacturing plant closes, nearly 6,000 people lose their jobs and move away. In a matter of months, John Harrison loses half the members of his championship-caliber basketball team, and he begins to ponder this very question: Who am I?

Strip away his roles as a basketball coach, a father and a husband—all things that John considers core parts of his identity—and what’s left? It isn’t until John literally stumbles across Thomas, a blind man dying from diabetes, that he starts to realize just how far down the list he places God. “Your identity will be whatever you tie your heart to,” Thomas wisely tells him after their serendipitous meeting in a hospital.

In addition to doling out spiritual guidance, Thomas begins giving him training tips, too, after John gets reassigned to coach the cross-country team. (Thomas, it turns out, was a cross-country champion himself in his day). Except that it’s not a team at all, it’s just one girl—and she’s asthmatic.

Young Hannah Scott has had a rough go of it. Her parents passed away when she was a baby, and now she lives with her grandmother, Barbara. The older woman is devoted to taking care of Hannah, but Barbara’s often absent as she works two jobs to make ends meet.

For John, meanwhile, coaching cross country feels like a demotion, a slap in the face since he doesn’t really consider it to be a sport at (which he comically discovers is not true after he’s barely able to complete a training run himself). For Hannah, running is the only thing she’s ever been really good at.

They’re an odd pair, without a doubt. But John (with the help of his loyal wife, Amy) begins to realize the impact he can have in his coaching relationship with Hannah. And despite her asthma and tough background, Hannah’s times begin to come down. With Thomas’ help, John begins to coach Hannah in earnest in her quest for a state cross-country championship.

And along the way, they both wind up discovering who they are in Christ.

Throughout the film, John both exhibits character at times but has to grow in it at other key points. When his basketball team loses the state championship, he tells his guys how proud he is that they got as far as they did, and he encourages them to look forward to the following year. But when John learns there won’t be a team the next year, he struggles, and he’s forced to confront how much coaching basketball has shaped his identity and heart.

John also pushes Hannah to do better, too, despite her struggles with asthma. He celebrates Hannah’s modest successes even when her best isn’t enough to win races. John’s son, Ethan, has obviously internalized many of his dad’s positive character traits. That’s evident when Ethan organizes a group of Hannah’s classmates to cheer her on at her cross-country meets. John and Amy are committed to doing everything possible to help Hannah, though at times their decisions land them in well-intended, but problematic ethical territory. (More on that below.)

John and his wife, Amy, occasionally argue (once even leaving Amy in tears). However, they demonstrate the strength of their relationship by coming back together to talk and pray it out a few minutes later. The reiterate the fact that they love each other, and each of them apologizes. Their mutual apologies aren’t lost on their two sons, who recognize that no matter how bad an argument may be, their parents (and their marriage) will ultimately be OK.

The school principal, Mrs. Brooks, takes a chance on Hannah because, as she puts it, “One runner matters.” She was friends with Hannah’s mom years before, and she even pays for Hannah to attend Brookshire in memory of their friendship.

Hannah has some deep, hidden character flaws that she eventually has the courage to admit and deal with.

[Spoiler Warning] Hannah eventually meets her long-lost father. This is something she’s longed for her whole life, so when she finally meets him hooked up to machines in a hospital bed, it’s a little overwhelming. Later, she asks him why he wasn’t there all of those years. Thomas, in turn, gets to apologize to his daughter for running away. He asks Hannah for her forgiveness and the chance to be the father he always should have been. Through their reconciliation, Barbara is also given an opportunity to heal and reconcile with Thomas, though that path to renewed relationship between them is a bumpy one.

When John stumbles into Thomas’ hospital room, he doesn’t realize he’s in for a spiritual awakening. But that’s exactly what happens. Talking with Thomas, John realizes how much he’s based his identity on things other than his Christian faith. John teaches and coaches at a Christian school, he visits sick church members in the hospital, and he calls himself a follower of Christ. But in other significant ways, he hasn’t put his faith at the center of his life. Eventually, John confesses his hypocrisy to Thomas, then asks for forgiveness and actively tries to do better.

Thomas can relate to John’s struggles. The diabetic man, who lived a rebellious life before being laid low by diabetes, tells John, “God had to let me lose my sight so I could see.” He helps John realize that something or someone will always be first in your heart, but when you find your identity in the One who created you, it changes your perspective on everything.

As John learns this important lesson about spiritual identity, he passes it along to Hannah, too. “Who is Hannah Scott?” John asks her after losing a race. She doesn’t know how to answer that question. At that point, Hannah doesn’t know or believe that God loves her.

But John and Amy, along with Mrs. Brooks, gradually help Hannah to see that despite her tough past, she has a perfect Father who wants to know her and love her. Mrs. Brooks explains how sin separates us from God and how Jesus’ sacrifice made a way back into right relationship with Him. Mrs. Brooks then leads Hannah through a prayer of salvation and asks her to read Ephesians in order to discover her new identity in Christ. (We see her doing exactly that, highlighting important phrases that describe who we are “in Him”).

We see various characters respond to setbacks with prayer and praise. Whenever they hit a roadblock, the Harrisons pray for guidance, wisdom and forgiveness—a habit their sons notice. Another character prays for Hannah and her grandmother. Barbara prays for God’s help to forgive someone who’s hurt her deeply. And during an emotional moment of reconciliation, John is overcome and leaves the room to express his gratitude to God.

A cross-country team prays together. Hannah ultimately teaches other young women about Christ.

We hear a passing reference to someone being born out of wedlock.

John doesn’t hide his disappointment as more and more of his team’s basketball players are forced to move away. At one point, he angrily throws a brick at the ground after an argument with his wife—an obviously inappropriate expression of frustration that he soon apologizes for. Hannah is chased and threatened by three teenage boys.

Thomas discusses how before he was saved, he got into drugs (particularly meth). We hear how his drug habit affected his life and the lives of those around him very negatively.

Before she becomes a Christian, Hannah often steals small items from people around her. She lies about it to her grandmother, and it’s implied that her thievery is the reason she was kicked out of her last school. (Hannah eventually returns all of the things she’s stolen, with written apologies.)

Throwing up after running is mentioned, and a runner is later seen doing so after a race.

A drama teacher bluntly and loudly critiques students’ auditions, at times bordering on bullying them (in scenes that are played for humor value, but which mostly come at the expense of students’ dignity).

[Spoiler Warning] John and Amy weigh whether or not it would be appropriate to tell Hannah about her father without consulting Barbara first. They ultimately decide to introduce Hannah and Thomas, but they neglect to mention anything to her grandmother—a choice she later confronts them about when she discovers the deception. For her part, Barbara keeps the truth about Thomas’ identity hidden from Hannah. The motivation for Barbara’s deception, she insists, is protecting Hannah from Thomas.

“Who is it that overcomes the world except the one who believes that Jesus is the Son of God?” (1 John 5:5, ESV).

John, Hannah and Thomas are truly overcomers in the Kendrick brothers’ latest dramatic effort. They face physical, spiritual, relational and emotional barriers preventing them from accomplishing their goals and moving toward spiritual maturity. But as Overcomer weaves their stories together, they (and we) are reminded that “the Creator gets to define His creation.”

Hannah eventually tells her coach: “I am created by God. He designed me, so I’m not a mistake. His son died for me just so I could be forgiven. He has a future for me because He loves me. So I don’t wonder anymore Coach Harrison. I am a child of God.”

And that’s the core message of Overcomer: Our identity isn’t based on our jobs or roles, our talents or passions, no matter how important those things might seem. Instead, who we are at the deepest level flows from our relationship with our Savior, whose love and grace shape our true identity as His children.

Overcomer illustrates the important concept of our identity in Christ, and how that identity frees us from defining ourselves by our roles, our passions or our failures. For more ideas on ways to guide your children toward their true identity in Christ, check out these resources from Focus on the Family:

Nothing to Prove: Why We Can Stop Trying So Hard