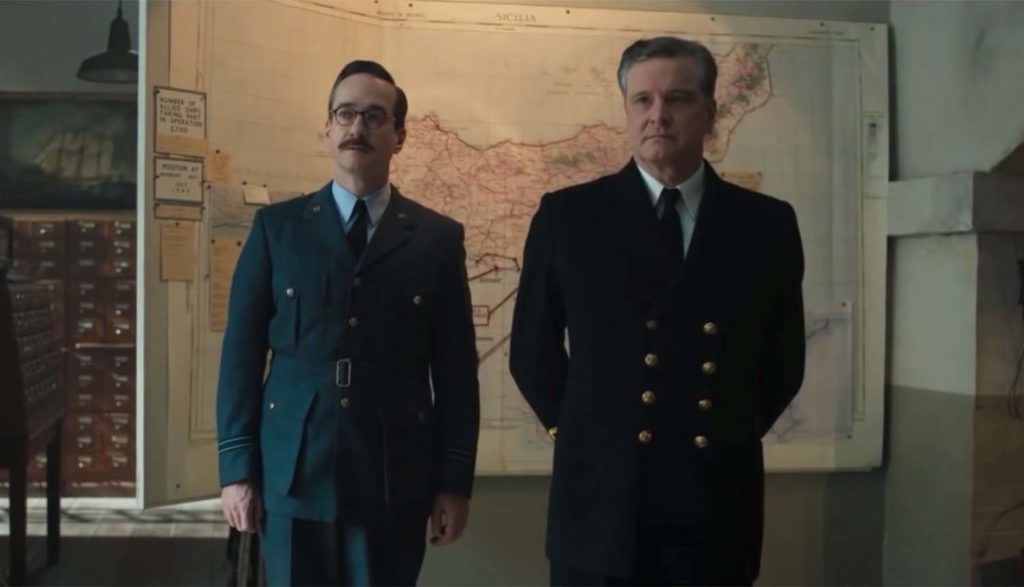 In war, death is as common as a breath of air. Bullets whiz, explosions light up the landscape and bodies collapse to the ground. Young men push their way through the unimaginable to claim mere inches of soil.

But behind the scenes, another war is raging—a war of whispers. And this war is not won through good aim or a quick trigger finger. It’s won through deception, codebreakers and mental strategy. What’s more, this behind-the-scenes battle will directly affect the outcome of its bloodier counterpart.

That’s why Ewen Montagu and Charles Cholmondeley are desperately working on Operation Mincemeat, a plan they hope will change, and help win, World War II. They know that Winston Churchill is planning to send British troops to storm the beaches of Sicily to march towards Rome and knock Italy out of the war. They also know that for that plan to not be a total slaughter of young British soldiers, they need to fool the German troops into moving their stationed men out of the country under the impression that the British are attacking elsewhere.

How will Ewen and Charles manage that deception? Well, it’s a bit of a long shot, but it’s the best they’ve got: They’ll dress up a recently deceased corpse as a decorated British officer—Major William Martin, they’ll call him—and a fake letter regarding non-existent plans to invade Greece. Then, they’ll drop the body off the coast of Spain and hope the neutral country delivers the documents straight to the office of the Führer himself.

The strategy has so many holes that it’ll take a miracle for it to work. According to Churchill, however, it’s just what they need.

“The plan is risky,” Churchill says. “It’s also highly implausible. Meaning that all the reasons it shouldn’t work are the same reasons the Germans might believe it’s true.”

Early in the film, Ewen is forced to send his wife, Iris, and children to live in America for their protection because Iris is Jewish. However, Ewen hints that Iris will likely never return because she wants a divorce. Though Iris says that marriages change, and romance and love belong to the young, Ewen says that he doesn’t believe that statement. Instead, he wants to sacrifice for her happiness—even at the expense of his own.

The mission itself, of course, is designed to foil the hopes and dreams of World War II’s European Axis powers of Nazi Germany and Fascist Italy. While war is often a murky business, few would argue that this war was as justified as war can be. And certainly, the goal of saving British lives is a worthy one, as well.

Admittedly, the plan involved the morally dubious use of a man’s corpse. In real life, the corpse was known only by its fake name (Major William Martin) for 50 years. It was not until 1996 that his identity was recognized—Glyndwr Michael. And, in a nice real-world turn, the British Government honored Glyndwr in 1997 by adding an epitaph to his tombstone recognizing him by his name.

[Spoiler Warning] Though the movie does not fully explore it, it does give a nod to the German people who actively resisted Hitler and the Nazi regime as “Hitler’s favorite intelligence analyst,” Alexis von Roenne, intentionally approves the deceptive documents. Like the other characters in the story, von Roenne was a real person, working for Germany’s military-intelligence service known as the Abwehr. He was also secretly working against the Nazis because he felt that the Nazi Party ran against his beliefs as a Christian. During his life, he misled Hitler to assist the Allies secretly, including with Operation Mincemeat. Eventually, von Roenne was arrested in connection to conspirators of the 20 July plot to assassinate Hitler. He would later be found guilty and executed.

Hester, a woman who works with Ewen and Charles, begins to pray, causing others to join in. In creating a fake life for their corpse, Jean, another woman who works with the two, says that William’s mother was a devout Catholic. Jean says that she wants to “say a prayer to St. Jude.” Jean talks about the grace of God.

Ewen says his wife Iris is “wiser than Solomon, stronger than Samson and more patient than Job.” Ewen creates a fictional girlfriend for William and says that she’s a “demon on the dance floor.” Ewen says that he doesn’t need to be reminded of his sins. Charles quotes 1 Cor. 15:52 over the corpse as they drop it into the ocean.

A couple of characters perform the sign of the cross. A nurse tells someone that God forgives them. Someone says “Godspeed” and “May God forgive us all.” A soldier mentions that he left his Bible below deck. A Spanish priest says, “in the name of the Father, Son and Holy Spirit, amen.”

A man and a woman kiss one another passionately in order to hide the fact that they are listening in on a private conversation, and the woman moans. A male spy is forced to stimulate the clothed genitals of another man in order to gain information, and the man is heard moaning. The corpse is seen naked on a coroner’s operating table, though no explicit parts can be seen.

Ewen hints that Iris wants a divorce. Various people greet and bid farewell with kisses on the cheek. A man is called a “skirt chaser.”

Both Ewen and Charles have obvious interests in Jean, and Jean has a fondness for Ewen, who is still married (though he believes he will never see his wife again). Ewen and Jean intentionally spend extra time than needed with one another, and there is occasional romantic tension between the two.

Ewen forcefully grabs Charles in a confrontation. Soldiers are shot and killed or hit by explosions in a battle, though there is little actual blood seen. Hitler shatters a glass in anger.

Charles’ brother is said to have been killed in war. Jean references that her husband died. A man is said to have committed suicide by ingesting rat poison. Off-screen, a child finds an unexploded firebomb.

The f-word is used three times. “A–,” “b–tard,” “h—” and “d–n” are all used sparingly. The British slurs “bloody” and “bollocks” are used occasionally, and crude references to breasts and male genitals are made. God’s name is misused nine times, and Jesus’ name is inappropriately used three times.

Various characters casually drink alcohol and smoke cigars and cigarettes throughout the film. One character is said to be on his sixth drink and is visibly impaired.

As soldiers dodge bullets on the front lines, men and women work fervently in the background to ensure those bloody battles can be mitigated at all costs.

Codebreakers such as Alan Turing decipher daily the plans of Axis troops. Strategists create, scrap and recreate countless plans in anticipation of expected Axis movements like a macabre dance of game theory. And Ewen and Charles, two military men in intelligence work, are putting together what some consider to be the strangest military operation that the British have ever conceived.

The complications which could arise from such a plan were countless. What if Spain gives the British authorities the papers back before Germany gets to read them? What if the ocean water causes the ink on the documents to fade away? What if the corpse doesn’t even float to Spain?

It’s a plan so fantastical that it could cause viewers to think the movie’s plot absolutely ridiculous—if it hadn’t actually happened in real life. And while Operation Mincemeat was a real plan, what moviegoers may find even more fantastical is that Ian Fleming, the creator of James Bond, helped work on the project. In fact, many of his ideas for James Bond were a direct result of working within the Naval Intelligence Division. According to Fleming, Bond “was a compound of all the secret agents and commando types I met during the war.”

Though set during World War II, little violence appears on screen apart from a single scene of soldiers in combat. Instead, the film focuses on those working in the background—and it offers a romantic subplot which feels somewhat misplaced within the film itself. Viewers should be aware of a couple sexual scenes (noted in our Sexual Content section). People frequently smoke and drink, and crude language is sometimes heard.

Operation Mincemeat features a side of war that typically doesn’t make the big screen—the planning and strategy side. We won’t be following a unit of soldiers as they make their way behind enemy lines and bond in their brotherhood. As Operation Mincemeat shows us, sometimes there’s more than one way to save private Ryan—through intelligence officers preventing the slaughter to begin with. It’s these secretive heroes who the film focuses on, providing not only praise for the operatives and their plan but also paying respect to the person whose corpse they used to accomplish it.