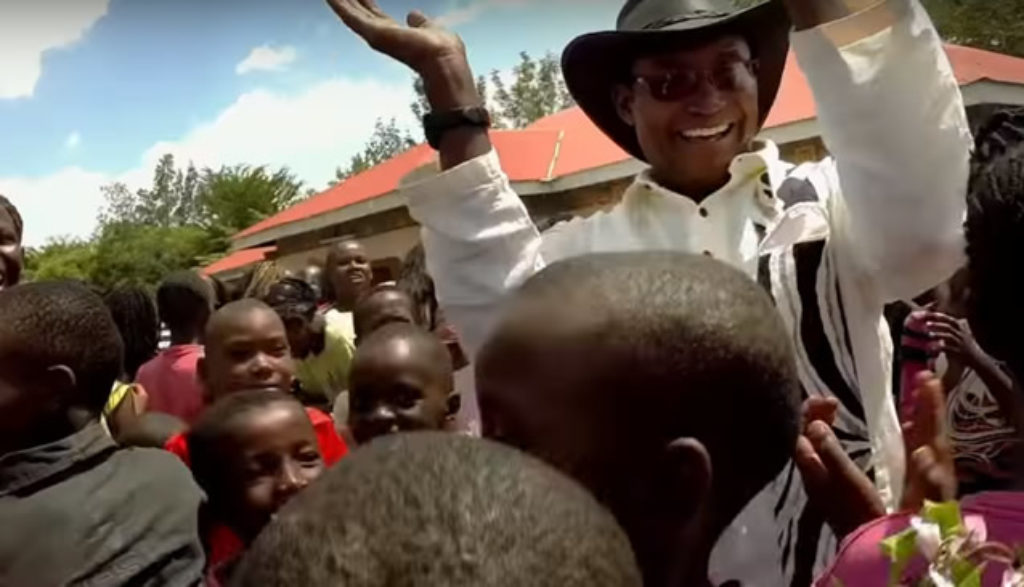 MULLY IS RETURNING TO THEATERS FOR AN ENCORE PRESENTATION TONIGHT, NOV. 9. FOR INFORMATION ON WHERE TO BUY TICKETS, VISIT, http://mully.focusonthefamily.com/.

Let’s face it: We all enjoy rags-to-riches stories. Who at Christmas doesn’t root for Tiny Tim and his family to finally get ahead, no longer under the thumb of Ebenezer Scrooge?! Who fails to be impressed by guys like Steve Jobs and Steve Wozniak, who launch a multi-billion dollar company from a garage? Or a young descendant of Abraham sold by his brothers, falsely accused and imprisoned who becomes the second most powerful ruler in the Egyptian empire?

It’s no wonder, then, that a story about a Kenyan boy who was abandoned by his parents and who eventually becomes a millionaire would grab our collective attention. What makes this true account all the more remarkable is that after reaching the pinnacle of financial success, he sold it all to focus on helping orphaned children just like himself.

That’s the inspirational story of Mully. And Focus on the Family has partnered with the makers of this inspiring documentary. Each of the three times I’ve watched it, I’ve gained a deeper appreciation for the man this film focuses on, Charles Mully.

Walking Away From the “Good Life”

Early on, we learn that Charles’ father was a destitute drunk who beat the boy’s mother. One morning when Charles was just 6 years old, he woke to find himself completely alone: His parents had abandoned him while he was sleeping. Begging and barely subsisting in the aftermath of their departure, Charles says he was so depressed that he wanted to take his own life. “I was so bitter,” he remembers. But he resisted that temptation. Soon thereafter, an acquaintance invited Charles to attend a church service. His life was changed, spiritually, at least. Financially, Charles was as penniless as ever.

Then one day, Charles took a huge risk: walking 50 miles to Nairobi to look for a job. What might the big city hold for a now teenaged boy without friends or family?

Day one in Nairobi was a bust. As was day two. But after knocking on lots of doors in the wealthier part of Nairobi on day three, an Indian woman opened the door … and made the life-changing decision to employ young Charles as a dishwasher and gardener. It was at this point that Charles’ tragic life began to take a turn for the better … financially.

Fast-forward a few years, and like Joseph in the Bible, Charles is promoted to a position of overseeing 800 farm workers. Soon, he meets the woman who would become his wife and bear him eight children.

Eventually, Charles decides to go to work for himself and launches a taxi business. It thrives. Then it’s another business. Then another. Then another. Soon, with his hands in transportation, tire sales, oil and gas, real estate and insurance, Charles and family are living the “good life.”

But one day in 1989, after being confronted by three homeless teens on the streets of Nairobi, Charles hops into his Mercedes and becomes convinced that the Lord is telling him that his “business” is about to change dramatically. No longer would it be buying, selling and deal-making. Henceforth, it would be working with the poor. Specifically, taking care of young, vulnerable children. The kind of child he had been.

When Charles returns home, he explains his new divinely directed vocation to his family. “It was a very hard time for them,” explains Charles. Though his family doesn’t initially share his enthusiasm, eventually they begin to catch his vision. Within a week of the announcement, the first three “street kids” show up in the Mully home.

From those initial three orphans in the Mully home, MCF (Mully Children’s Family) has grown to help thousands of vulnerable children on five different campuses across Kenya. And when the proceeds from Charles’ own businesses began to dwindle, God showed up miraculously, time and again, to provide through the generosity of His people. Over time, MCF expanded into new areas that provided new income and resources, including farming, irrigation and raising fish.

Since 1989, MCF has discipled more than 12,000 children, becoming the largest children’s rescue, rehabilitation and development organization in Africa—all with a spiritual emphasis foremost in mind! Says Charles, “My main goal was introducing the children to Jesus Christ.”

To do that, Charles believes the kids need a safe environment, healthy meals, decent clothes as well as a vigorous place to learn, work and grow. With Charles and his staff investing into the lives of orphaned children, many have gone on to become doctors, teachers and lawyers who are currently giving back to others in Kenya and other parts of the world.

What Do You Hope to Accomplish, Mr. Mully?

Charles Mully visited Focus on the Family in May 2017, and I was privileged to spend some time with him. I asked what he hoped to see accomplished through this documentary about his remarkable life. He replied in part:

“[I want those who see the film to know] that even if you cannot do as [I did], you can get involved with helping others and have that spirit of being able to support others, give them hope to get them transformed for them to transform other people.”

Many orphaned Kenyan children have been transformed in the 28 years since MCF’s inception. And now American filmgoers have a chance to be challenged and encouraged as well by this humble orphan-turned- businessman, a visionary man who said no to riches in order to say yes to the poorest of the poor.

Furthermore, there’s a lot to be said for the way this film challenges moviegoers to consider how to better hear the voice of the Lord and to step out in faith against all odds. One of my favorite stories along that line is Charles talk about hearing from the Lord where to dig for water (after three commercially drilled wells came up dry). I won’t spoil it. But it’ll make you smile (if not weep). Another involves Charles’ insistence on building a bridge over a dry river bed during a drought. Still, another highlights a major tree planting project that literally changed one facility’s weather patterns and continues to pay dividends to this very day.

Can a single person make a big difference? What happens when someone is sacrificially obedient to the call of God on his or her life? Does God really still speak to His people and if so, how do we hear His voice? Is there hope amid the myriad tragic stories of poverty and abuse that some can and will rise from the ashes? And what can you and I do in some similar fashion?

Mully challenges us with all these crucial questions in ways that no doubt will have lasting kingdom impact.

(A cautionary note: Newsreel footage of actual violence, as well as discussions of trafficked children, may be too intense for younger viewers. In addition, the film doesn’t shy away from telling the story—warts and all—of the Mully childrens’ original displeasure with their father’s decision to help orphans, while not consulting his wife in advance. That said, the documentary also shows us how Charles’ own children eventually caught his vision for rescuing children from crushing poverty—a vision that looks set to keep impacting the lives of poor Kenyan children well into the future.)