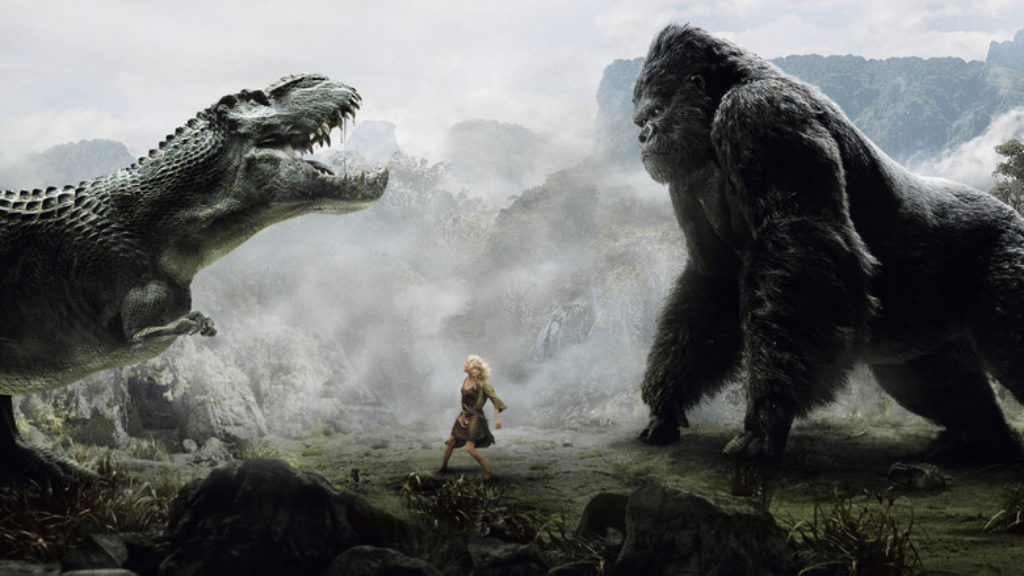 Giant ape meets girl. Giant ape loses girl. Giant ape goes ballistic and escorts girl to the top of New York’s tallest skyscraper. It’s a familiar love story that gets a few new twists—including a dose of tenderness—in Peter Jackson’s rollicking, three-hour extravaganza, King Kong. Inspired by the 1933 original (the movie that lit a filmmaking fire in Jackson’s belly at age 9, as opposed to the 1976 update that didn’t ignite much of anything), the story opens with snapshots of Depression-era New York City. Shantytowns. Soup lines. Vaudeville shows. In fact, that’s where we find lovely company player Ann Darrow givin’ ’em the ol’ razzle-dazzle in a theater about to succumb to hard times.

Meanwhile, cinematic snake-oil salesman Carl Denham is desperate to get a movie made that will satisfy the angry investors he’s been stringing along. He’s heard rumors of a mysterious island that could provide the very spectacle he needs. Pressured to weigh anchor, he “discovers” the down-and-out Ann and convinces her to be his leading lady. Carl also manipulates his reluctant screenwriter, respected playwright Jack Driscoll, into making the journey. Jack and Ann hit it off, unaware that a ferocious, 8,000-pound silverback will turn their blossoming romance into a rather awkward love triangle.

When the excessively creepy natives of Skull Island sacrifice Ann as a kicking, screaming hors d’oeuvre to their hairy, chest-thumping god, the ship’s crew rushes into the jungle to rescue her, though it’s obvious Carl’s top priority is capturing the prehistoric setting on film. The search party encounters dinosaurs, enormous bugs, vicious bats and, of course, a cranky monkey who comes to appreciate Ann as more than just a late-night snack. He’s smitten. So Ann and Kong open a nice little bed-and-breakfast to give those uptight natives a place to unwind and play racquetball. (OK, I made up that last part.) Actually, what’s left of the decimated rescue team orchestrates Kong’s capture so that Carl can put him on display in the big city. All goes as planned until the beast creates chaos in his search for beauty.

Ann and a fatherly actor friend look after one another, each concerned that the other is eating well. He reminds Ann of her value and urges her to chase dreams. The first mate, Hayes, is a father figure to a sailor he found as a young boy and has been mentoring ever since.

Carl pays Ann’s debt when she’s caught pilfering fruit and proceeds to buy her a meal. (He’s clearly hoping for a return on that investment, but it’s still a kind act.) Although he’s mousy and often lacks the courage of his convictions, Carl’s assistant, Preston, acts as his boss’s conscience.

Once in the jungle, men leap to one another’s aid. Jack risks life and limb on several occasions to rescue Ann. A narcissistic movie star prone to cowardice turns a corner and behaves heroically.

The softening of Kong’s heart and Ann’s increased respect for this jungle king illustrate the power of friendship, even between species. No passive damsel in distress, Ann is a strong woman who teaches Kong the meaning of beauty and pleads for the men not to hurt him. While unemployed she resists the temptation to take work with a sleazy burlesque show.

As a fish-out-of-water story, King Kong implies that what one creature calls home can be a hostile, dangerous place to another, be it the jungle or the city. The movie promotes mutual understanding as it cautions mankind not to destroy the very things that fascinate us. Director Peter Jackson told USA Today, “You realize that human beings always end up destroying the things that are mysterious and wonderful in our world. We can’t help but muck it up.”

Saved from certain death a man utters “thank God” only to have the ship’s captain credit human initiative instead (“Don’t thank God. Thank Mr. Baxter”). The heavily pierced inhabitants of Skull Island come across as possessed savages under the influence of the occult. More than just drum-beating, Kong-worshiping followers of some quirky witchdoctor, these are oppressively dark, vicious, zombie-like natives. Many walk around with their eyes rolled back in their heads. To appease Kong they conduct human sacrifices.

Desperate for work, Ann stands in front of a burlesque theater plastered with signs reading “adults only” and photos of immodestly dressed women. To her credit she walks away, and is ready to do the same when she misinterprets a proposition by Carl as having sexual strings attached. Jack and Ann kiss passionately. One of Carl’s investors wants to know if the director’s upcoming film will feature jiggling breasts, causing Carl to call the man a low-life for even asking such a question. A stage comedy features a man in drag (context unclear).

Ann gets shaken up a lot when grabbed, carried and later rescued by Kong. The ape playfully knocks her around until she tells him to stop. People are attacked by prehistoric creatures, from giant mosquitoes to hungry lizards. On the island, Kong battles three T-Rexes (biting the tongue out of one and breaking its jaw), a swarm of bats, and men wielding machine guns, harpoons and knock-out gas.

During his unveiling of Kong in New York, Carl tells the crowd that the mission claimed the lives of 17 men—an understatement. A guy gets speared by natives. Another has his head chopped off out of frame, a fate also about to befall Carl until members of the ship’s crew start firing guns at the locals and kill at least one. Other doomed characters are crushed, thrown and/or bitten in two by the great ape, squashed or munched by dinos, knocked off a crumbling cliff, shaken from a log into a vast cavern, eaten alive by giant fanged worms and snatched out of the air like a bug by a mysterious creature. Just the attempt to subdue Kong finds him wildly swiping his arms, sending four or five screaming guys flying into the air. He smashes a rowboat, dispatching several more.

Kong’s tempestuous visit to Manhattan yields all sorts of property damage. Cars wreck. Buildings crumble. A theater gets demolished. Kong tosses city folk aside as if they were rag dolls, sometimes with fatal force. He stomps a man to death. He assaults a trolley car. Pilots train their machine guns on him before the agile ape destroys several biplanes. The military uses heavy artillery to try to bring him down, causing collateral damage. A bullet-riddled Kong plummets from atop the Empire State Building.

The ship’s cook tells the story of a man who ended up with “a knife in his heart.” We also see the residue of violence with lots of human skulls, rotting remains and impaled skeletons. A crewman is found dead in his cabin in a pool of blood. The boat and its passengers are battered violently by waves and rocks.

Exclamatory profanities range from mild (“h—” and “d–n,”) to blasphemous (six uses of “g–d–n,” several “for god’s sake” and a dozen abuses of Christ’s name). Very disappointing. A person is called a “turd,” and Carl boasts, “I’m real good at crappin’ the crappers.” A man fires off a laundry list of slang terms for women’s breasts.

Carl calms his nerves with alcohol on several occasions. Typical of films set in the 1930s, many characters smoke cigarettes. Others puff cigars. Carl prepares a pipe. Ample amounts of chloroform are used to bring down Kong.

Carl is more scurrilous (and by the end less likable) than in the original Kong. With an Ahab-like obsession, he values the film he’s making above human life. While those misplaced priorities aren’t treated as noble, this lying, scheming opportunist escapes consequences. Giant bugs, including a millipede that cozies up to Ann, may gross out some viewers. A sympathetic young man also happens to be a vandal and petty thief.

As kids growing up in the New York metropolitan area during the 1970s, my brother and I enjoyed a unique Thanksgiving Day tradition that had nothing to do with football or the Macy’s parade. Every year, a local TV station would broadcast King Kong, Son of Kong and Mighty Joe Young. In that order. Back-to-back. Since those were the days before video rentals, that annual monkey-fest was as much a part of our holiday as turkey and pumpkin pie. Why do I mention this? To give you some idea of how much I wanted to love this movie and how disappointed I was by its excesses—specifically demonic natives, abuses of Christ’s name and realistic fatalities that, in Peter Jackson’s attempt to be shockingly cool, often come across as perversely self-indulgent.

Consider that a scene featuring man-eating spiders was cut from the original Kong after members of a preview audience literally lost their lunch. It went too far. So someone at the helm back in 1933 vied for restraint. That was then, this is now. Jackson loved the notion of crewmen surviving the fall from a log into a chasm only to encounter jumbo bugs with a super-sized appetite. Newsweek‘s Devin Gordon wrote, “Before he won a raft of Oscars for The Lord of the Rings, before he stunned the art-house crowd with the 1994 drama Heavenly Creatures, Peter Jackson, New Zealand’s favorite son, directed a series of demented, low-budget horror films that seemed designed to make people barf. Repeatedly. For Jackson, one of the biggest perks of re-creating Kong … was the chance to do his own spider-pit scene.” And what Peter wants, Peter gets.

Make no mistake, King Kong is an amazing remake. It looks great. And once it kicks into high gear, it maintains a breakneck pace. Supporting characters are colorfully drawn so that we care when they’re in danger, and the bond between Ann and Kong is unusually sweet. Even if their mutual attraction strays toward silliness near the end, the relationship has heart. That’s due in part to delightful subtleties in Kong’s personality—brought to life by actor Andy Serkis and state-of-the-art computer wizardry. The Academy might as well give Richard Taylor’s effects team the Oscar right now if only for Kong’s rampage through Manhattan and the brilliantly choreographed T-Rex battle.

King Kong will certainly sell lots of popcorn. It will also cement Jackson’s status as a 21st century Steven Spielberg, a master at creating heartfelt, effects-filled blockbusters at a time when been-there, seen-that audiences aren’t easily impressed. But what would’ve made this escapist adventure even better is a little old-fashioned restraint.