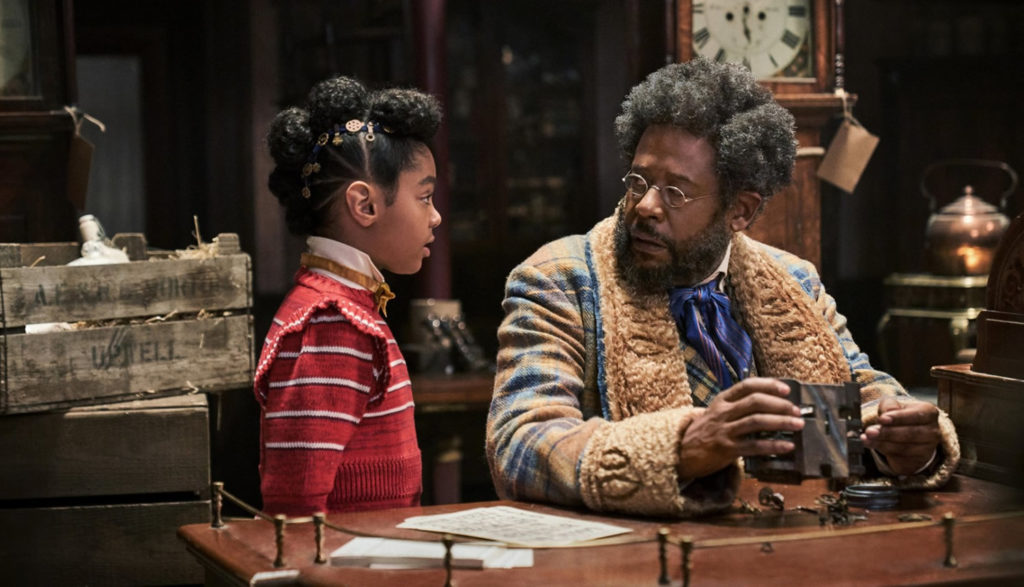 Years ago, Jeronicus Jangle was considered the greatest inventor in the world. His shop, Jangles and Things, was a world of wishes and wonder, where you purchase all sorts of gadgets and gizmos.

But it was all taken from him.

Just when he thought all of his dreams would come true, one of his inventions (a sentient toy called Don Juan Diego) turned on him. Don Juan didn’t want to be mass-produced, which would have made the Jangle family rich. He liked being one of a kind. So, Don manipulated Gustafson, Jeronicus’ apprentice (who was already disheartened by his master’s apparent lack of interest in his projects), to “indefinitely borrow” Jangle’s book of inventions for himself.

Gustafson became rich and powerful, winning awards for the toys Jeronicus had invented. Meanwhile, Jeronicus—unable to convince the constables of what Gustafson had done—lost everything, including his family.

He converted Jangles and Things into a pawnshop and bitterly vowed to never invent again.

But now, years later, Jeronicus finds himself in a pickle when his bank comes to collect on the loan it gave him back when he was still inventing. He has until Christmas to either pay the bank back or create something spectacular, something sensational, something revolutionary to save his shop.

Jeronicus is all but ready to throw the towel in, when who should show up but his granddaughter, Journey.

Much like her grandfather before her, Journey sees the world differently from everyone else. While other children her age like to run and play, she prefers measuring things and inventing. And she’s determined to make Jeronicus believe in himself again.

Journey knows that she is a bit odd. She says it’s tough being different. However, Jessica’s support of her daughter’s unusual hobbies gives Journey confidence. And Journey encourages others by telling them there’s nothing they can’t accomplish if they just believe.

Jeronicus is inspired by Journey’s can-do spirit, but he is also influenced by Ms. Johnston, the widowed mail carrier who has a crush on him. Despite her (sometimes irritating) attempts at flirting, Ms. Johnston actually offers some sage advice, telling Jeronicus that just because he’s down now doesn’t mean he can’t get back up again.

Journey’s positive attitude also helps Edison, a young boy who fancies himself as Jeronicus’ new apprentice, to overcome his many fears (but especially his fear of failure). Jeronicus yells at Journey in anger when he thinks she is lying to him, but he later apologizes.

[Spoiler Warning] Jeronicus has a very supportive wife through all his failures and triumphs. However, when she falls ill and passes away so soon after Gustafson’s betrayal, Jeronicus is overcome with grief. His daughter, Jessica (who wanted to be an inventor like her father), feels as though she lost two parents instead of one. And after years of Jeronicus insisting that she would be better off on her own, Jessica finally grants his wish and leaves to live her own life. Years later, Jeronicus finally apologizes for pushing her away. She forgives him, and he promises to be there for her and Journey the way he always should have been.

Jeronicus’ inventions are described as magical (and one person says that all his toys were alive, even the ones that shouldn’t be). We see a bit of that magic play out onscreen when Jeronicus and other members of his family draw mathematical equations in the air and sparkly dust appears from their fingers—though this isn’t visible to anyone else.

It’s unclear what the final ingredient for the Don Juan toy was. But much like the hat that brought Frosty the Snowman to life, it made Don Juan sentient.

A woman says she has a sixth sense about what’s inside mail packages without opening them. A boy thinks he sees a ghost. We see a church in the background of a scene. Someone says a girl has “evil” in her eyes.

Ms. Johnston repeatedly attempts to solicit hugs and kisses from Jeronicus. At one point she forces him to wrap his arms around her, and we hear someone joke suggestively, “Well, when a man is desperate for money, I guess he’ll sell anything.

A couple kisses. A man kisses a woman on the cheek, and she responds coyly, “Meow.” Another man kisses Jeronicus on the cheek (though this is platonic).

Don Juan blows kisses to some women and compliments his own rear end. Some women’s dresses show cleavage. We also see women’s bloomers when they dance.

A malfunctioning toy hits a man in the face and injures him. After Journey accidentally knocks a lantern onto some hay, she and Edison are chased by the fiery inferno that ensues. Several people fall and crash into things, but nobody is harmed. Don Juan slaps Gustafson in the face several times.

Don Juan says that when a bull sees him, the bull slays itself. Gustafson roughly grabs Journey by her arm and later ties Edison up with rope. Guards are told to stop some children by kicking their shins, pulling their hair and twisting their arms.

We see some people drink wine and champagne. A man asks a woman if she is drunk.

Don Juan is vain and greedy. He plays on Gustafson’s insecurities and convinces him that it’s OK to “borrow” Jeronicus’ book of inventions since Gustafson helped with some of the designs (though he knows deep down it’s really stealing).

Admittedly, Jeronicus might have been able to prevent Gustafson’s betrayal if he had made a more concerted effort in showing how much he appreciated his young apprentice. However, we also learn that Gustafson was impatient, and if he had just waited a little longer, Jeronicus not only would have helped him with his inventions but would have proven that the Jangles thought of him as family.

People laugh at a man when his inventions repeatedly fail. Don Juan calls a man “stinky.” Some children sneak onto Ms. Johnston’s mail truck to get into Gustafson’s factory. Jeronicus is irritated that nobody will call him by his proper name. Various characters lie.

Jingle Jangle comes with a veritable sledful of positive messages. It encourages people (especially kids) to believe in themselves. It tells us to never be worried about what other people think of us. And it reminds us that what makes us special isn’t something that can ever be forgotten or lost; we just might have to try a bit harder to remember and find it again.

The “magic” that runs through Jeronicus’ family is a theme parents may want to talk through with younger viewers. Still, it’s depicted here less as a supernatural gift and more as a unique ability that Jeronicus’ family has to understand complex math and science. And although the movie seems to be more concerned with teaching kids to believe in themselves, it’s pretty hard to get past the fact that the Buddy 3000 only works when people believe it will.

That small caveat aside, this film’s strong storytelling, talented cast and uplifting songs (Jingle Jangle is a musical!) make it a tale the whole family can enjoy.