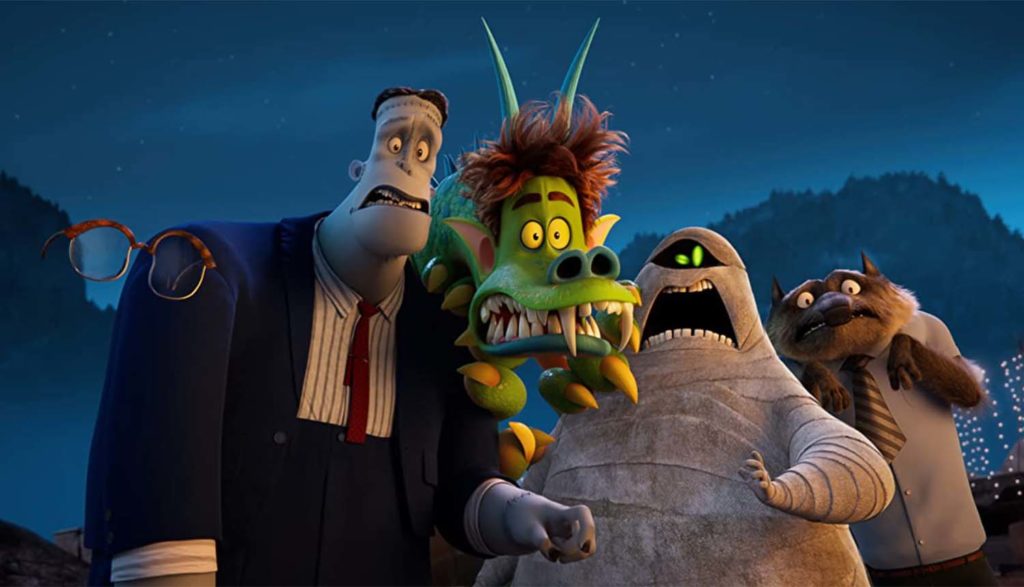 Things are going great at Hotel Transylvania. So great, in fact, that old vamp gramp Drac is finally ready to retire and pass the hotel over to his daughter, Mavis.

But while those dizzying ideas thrill Mavis, they make Dracula positively sick. So instead of giving them the hotel at its 125th anniversary celebration, Drac announces he’s expanding the hotel instead.

Understandably, Mavis and Johnny are devastated.

And thanks to a lie told by Dracula to Johnny (who never felt like Drac truly accepted him into the family), Johnny’s under the belief that Drac can’t transfer the hotel to them because Johnny is human.

So, what does can-do, never-give-up, always-optimistic Johnny do? He seeks out a way to transform himself into a monster using a device created by Dracula’s own great-grandfather-in-law, Abraham Van Helsing.

And it works … until it doesn’t.

After transforming Johnny into a terrifying beastie, the device inadvertently turns Dracula into a human.

The guys are in trouble. Because the longer Johnny stays a monster, the more beastly he becomes. (And no way are they gonna stop Mavis from finding out about this one.)

Dracula and Johnny obviously don’t see eye to eye. If Drac had his druthers, he’d change quite a few things about his boisterous son-in-law.

However, Dracula sees that Mavis loves Johnny just as he is. She wouldn’t change a thing about her husband. And even though Drac may not love every characteristic of his son-in-law, he realizes that by choosing to only see the bad in Johnny, he was missing out on Johnny’s best qualities (like his kindness). Eventually, the father and son-in-law reconcile their differences, apologizing for their wrongs toward each other.

Several adult characters take on the childish strategy of “lie until I can fix it, so nobody finds out.” This doesn’t work. And though they are forgiven for their deceptions, it becomes clear that if they’d been truthful from the beginning, they could have found resolutions much quicker—an important lesson for young viewers.

Friends and family put their lives on hold to help each other out. And some even risk their lives to save each other. Various subplots emphasize the goodness of marriage and family.

To quote Bob Hoose’s review of the first Hotel Transylvania: “Even though transforming vampires, the shambling undead and all manner of spooky creatures are never explained or treated in any realistically spiritual way, a recognizable monster mythos is constantly front and center.”

At one point, a zombie is temporarily turned into a human, but he is immediately rebitten by another zombie, returning him to his monstrous state. Several characters also have magical capabilities—such as turning into bats and breathing fire.

Dracula isn’t the only monster transformed into a human. Drac and his friends are shocked when Griffin, an invisible man, becomes visible again. Not, as he suspects, because of his curly, red hair, but because he is nude. We see his animated bare bottom on a few occasions before he finds proper clothing. We also hear multiple jokes about nudity and rear ends throughout the rest of the film. (And Griffin’s friends insist he wears clothing even after they return him to his invisible state.)

Dracula and his bride, Ericka, smooch and flirt a lot. Ericka calls him “hot stuff.”

We see a close-up of a skeleton’s pelvis. (Which is meant as a joking aside to adults in the crowd.) Another of Drac’s friends, Frankenstein, falls narcissistically in love with himself after becoming a handsome human.

Characters get roughed up and tumble around a lot, though seemingly, nobody is permanently injured.

That being said, when Johnny becomes a monster, the side-effects cause his mind to become monstrous as well. He goes on a rampage, bent on killing Dracula, that involves smashing trees, breathing fire and knocking around other characters (including Mavis).

Piranhas attack a human Dracula. And when Johnny tries to kill several mosquitos (the vampires of the jungle), he accidentally hits Drac. Mavis punches her dad by mistake.

None. That said, Mavis exclaims “gosh” and “holy rabies” on a few occasions. And another character says, “What the …?” without completing the phrase.

Characters lie to their loved ones. Dracula’s friends say they are uncomfortable lying to Mavis for him, but they comply nevertheless.

Wayne, a werewolf with a crazy brood of children, gladly ditches his wife with the kids after turning human, since his kids don’t recognize him. This is played for humor but could still rub wrong with some parents.

There are a few jokes about the inconveniences of being human—allergies, body odor, blisters, sweat, sunburns, etc. Dracula notes he has “swamp butt” while hiking through a jungle.

If there’s one lesson the Hotel Transylvania saga has given us, it’s the importance and endurance of family, even when that family sometimes falls short of your expectations.

Johnny is not the son-in-law that Dracula would have picked. (Truth be told, Drac probably would have preferred his baby Mavis never married.) However, just because Johnny isn’t everything Drac dreamed of, that doesn’t mean he isn’t a good fit for Mavis.

True, Johnny’s antics are often ill-advised. But his heart is in the right place. And once Dracula takes the time to get to know Johnny and understand where he is coming from, he realizes that his son-in-law might not just be good for Mavis but for their family and the hotel as well.

The film features several monsters, which might be frightening for younger viewers. And, of course, there’s a bit of monstery magical stuff in play, too.

But the only significant content caveat for this film is the naked truth behind the invisible man. It turns out he’s been nude for the past several films (a fact hidden by his invisibility). And after showing his unclothed rear end on screen, it becomes the (ahem) butt of several jokes throughout the film.

Otherwise, Hotel Transylvania: Transformania offers more of what we’ve seen from this franchise with each entry: a sweet and innocuous story with a heart-warming lesson about loving your family and always looking for the good in them.