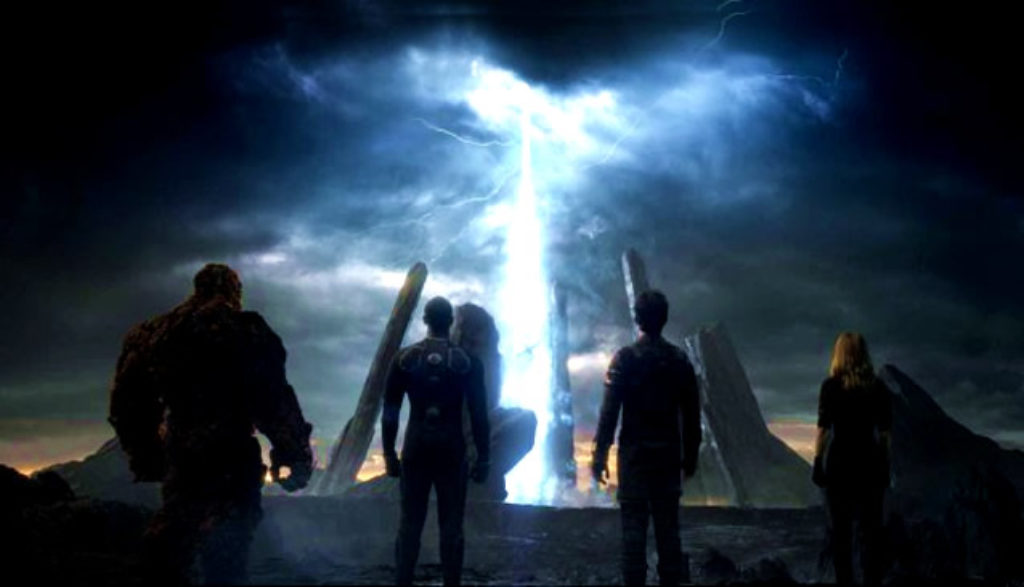 Dr. Reed Richards carries a burden for humanity, always looking for a way to cure diseases and better the world’s condition. Wanting to study the effects of cosmic radiation on living tissues, he sees a prime opportunity with an upcoming cosmic storm that will pass close to Earth. But he’ll have to be in outer space to conduct the experiment.

That’s where billionaire investor Victor Von Doom comes in: Reed needs Victor’s orbiting space laboratory to study the radioactive cloud. It just so happens, though, that Reed and Victor were college rivals and that Reed’s ex-girlfriend, Susan Storm, also happens to be Victor’s chief of genetic research and possible love interest.

Still, Victor offers his lab and personal services on the space station, hoping to profit from the venture. Along for the mission are Reed’s longtime friend and astronaut, Ben Grimm, and space shuttle pilot Johnny Storm, Susan’s hotshot brother. Once in orbit, Reed realizes that the cosmic storm is approaching faster than expected. Before they can lock down the station, the five are blasted by super radiation.

At first, the team members don’t seem to suffer any undue effect. But then strange things begin to happen. Reed becomes elastic, stretching and bending his body to an extraordinary degree, transforming into Mr. Fantastic. Susan finds she can turn invisible, hence her new name, The Invisible Woman. She can also project strong force fields. Johnny can control fire and fly like a rocket, thus becoming The Human Torch. Ben suddenly has mountainous strength—and the rocky body and disposition to go with it. No one knows what to call him; he’s just The Thing. And Victor finds his muscles and sinew turning into a super-metal of some sort, while he can also draw energy from diverse sources and hurl it about. Always a power-hungry, cynical malcontent, his name becomes his destiny: Doom. Soon his rivalry with Reed takes an ominous turn.

Frankly, there are a number of less-than-fantastic self-centered choices made in this pic. However, Reed states that he isn’t interested in fame. Rather, he wants to do something that will make a difference for all mankind. He also voices concern for his teammates and eventually steps forward to lead them out of a deadly situation. Indeed, in their first foray as the Fantastic Four, Reed, Sue, Johnny and Ben work together to protect one another and defeat a powerful foe. Dr. Storm speaks of his love for his children and his passionate desire to help Earth survive after years of humans’ bent toward wanton destruction.

Early on, Dr. Storm talks about a discovered alternate dimension—dubbed Earth Zero—that represents our planet from a billion years ago. He believes it holds answers to “questions about the origins of our species.” The villain Victor Von Doom later gains god-like powers from that place and moves to reshape it to his own liking and image.

Reed crawls naked through an air duct. (We see him primarily from the waist up.) Sue wears a formfitting suit.

As everyone knows, Reed and Co. do make it through to Earth Zero and gain superpowers. That happens after Victor accidentally creates a cataclysmic upheaval of a bubbling energy source on the planet’s surface that appears to consume him, reduce Johnny to a burning lump of flesh and bone, smother Ben under an avalanche of rock, crush Reed’s legs and zap Sue with a energy blast that sends her flying.

Later, Victor reappears with his flesh seared away and his environmental suit fused into his body, officially turning him into Dr. Doom. This hyper-powerful meanace blows out walls and windows, killing people with a thought. He makes a man’s skin blister and boil until the poor chap erupts in a gush of blood, sets another’s flesh to smoldering and causes many screaming people’s heads to explode and gush fountains of gore that splash nearby surfaces as the victims fall. He’s not done, through. He creates a black hole that sucks up a building, a jetliner, a mountain landscape and scores of innocents.

We see films of Ben, now the rocky Thing, smashing tanks, bashing people and generally demolishing everything around him with Hulk-ish rage. Reed thumps and tosses enemies with his stretchy rubber-like appendages. Johnny blazes away with fire blasts. (He also gets into a car crash, cutting his face and breaking his arm.) We learn that Ben got his “It’s Clobberin’ Time” catchphrase from an abusive older brother who slapped him around as a boy.

Victor suggests that the military should use their discovered alternate dimension to torture political prisoners.

A half-dozen s-words join two or three uses each of “a–,” “h—” and “d–n.” God’s name is misused six or eight times, once or twice in combination with “d–n.” A guy is called a “d–k.” Someone flips his middle finger.

Reed, Victor and Johnny all get drunk while passing around a flask.

Johnny drives recklessly in a street race and then lies to his father about it. Several team members disobey rules set by Dr. Storm (creating a disastrous situation in the process).

Fantastic Four has all the nuts and bolts and moving parts of a fun modern superhero movie—from attractive stars to CGI bombast. But it’s a super-suited tin man in need of a heart. It’s hard to care about these “kids.” It’s hard to cheer them on. It’s hard to hear them swear. It’s hard to learn any sort of lesson about bravery or self-sacrifice.

So we’re left to focus on an earful of despairing declarations of how we’ve wrecked our planet, an eyeful of only somewhat good guys who can’t seem to keep from stumbling over their own rocky or elasticized feet, and a gut full of gotta-make-him-meaner villain battles where landscapes are pulverized and people blister and blow up in chunks.

Turns out, I guess, that a box of rocks, wrapped in super-stretchy rubber, set on fire and levitated with a force field … is still a box of rocks.