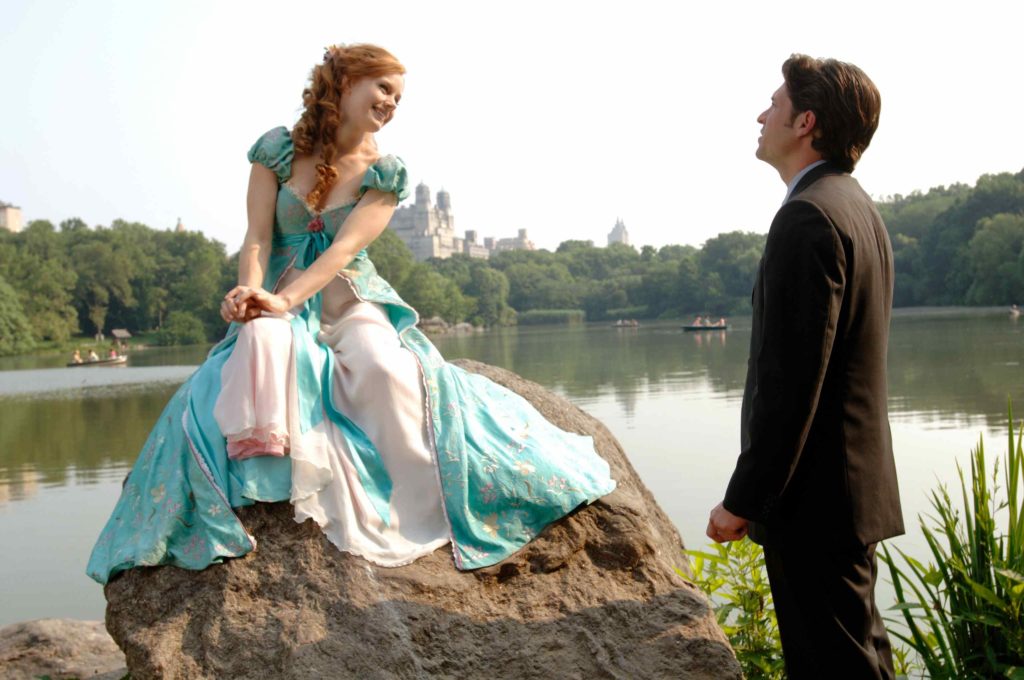 The lovely Giselle communes day-by-day with woodland creatures in a magical, animated land called Andalasia, dreaming and singing of a handsome prince who will one day deliver “true love’s kiss.” So when the dashing Prince Edward rides to her rescue, the two fall instantly in love and, in true fairy-tale fashion, decide to marry the very next day.

Edward’s mother, the wicked Queen Narissa, will not give up her place of power so easily, however. She tricks Giselle and banishes her to a land where there are no happily-ever-afters—a distant, dismal, dirty place called … Manhattan.

When the confused beauty pushes aside a manhole cover and pulls herself up into a flesh-and-blood world filled with tire-screeching traffic and crusty citizenry, she immediately realizes that something is horribly wrong. Rain-drenched and distraught, Giselle is rescued by Robert, a kindhearted divorce lawyer, and his young daughter, Morgan. But Robert isn’t sure what to do with this vulnerable, naive young woman. She’s definitely shaking his cynical views and having a strange impact on his life.

Things aren’t all quiet on the Andalasian front, either. Much to Queen Narissa’s consternation, when Prince Edward learns of Giselle’s disappearance, he leaps into action and makes his own way to New York. Realizing that her deceitful plan may soon be foiled, the miffed monarch sends bumbling henchman Nathaniel to finish off the young girl once and for all.

Giselle has a pure, trusting heart. She carries that purity and innocence into her dealings in the flesh-and-blood world. Open and kind to everyone she meets, she sings of the joys of love and life. When faced with the fact that a husband and wife are getting a divorce, Giselle is brought to tears by the sadness of it. Better yet, when she helps remind the couple of the things that drew them together to begin with, they start to rethink their choices. “Everybody has problems,” they conclude. “Do we sacrifice all of the good times because of them?”

Robert had his heart broken when his wife left him years before, but slowly regains his faith in romantic love because of Giselle. Giselle, for her part, learns that true love is more than a song and a kiss, and that solid relationships take work. And when she sings of true love in Central Park, even the hard-boiled New Yorker onlookers catch her vision and begin to sing along.

Robert gives Giselle money, which she immediately gives to someone in need. Edward is willing to face any threat and overcome any obstacle to protect Giselle. In the end, Robert steps forward to do the same. [Spoiler Warning] No passive princess, Giselle bravely rescues her man (with help from a spunky chipmunk). And when characters see that the ones they care for love someone else, they selflessly step aside.

The magic utilized here is exactly the type that you would expect to see in a Disney animated movie such as Snow White, Cinderella, Sleeping Beauty or The Little Mermaid. Prince Edward’s mother is evil and powerful in both the animated world and ours.

She creates a portal in a well that Giselle falls through, for instance. She talks to Nathaniel by appearing in various liquids, and she manufactures poison apples for him to distribute. She disguises herself as an old hag. She supernaturally blasts a manhole cover into the Coke sign in Times Square. She fries cars at the intersection. And later, with a wave of her arms and a guttural incantation—amid fire and swirling colors—she transforms into a giant, marauding dragon.

Giselle bares some cleavage throughout the film in her off-the shoulder wedding dress and later in both homemade and contemporary gowns. Queen Narissa wears a low-cut dress in her animated and real-life forms. Robert bursts into the bathroom as Giselle is stepping out of the shower. (Two birds fly a towel in for a timely, PG-rated covering.) While Giselle is wrapped in this towel, she and Robert trip and she lands on top of him in the hallway.

Robert’s girlfriend, Nancy, sees this and is upset that this strange girl is staying in Robert’s apartment. Which brings up this positive point: Robert has refused to let Nancy spend the night with him, holding up their circumspection as a standard for his daughter.

As Prince Edward is going door-to-door in search of Giselle, a beefy (male) biker-type gives him an amorous look. (Edward moves on without notice.) Construction workers grin and grimace when Nathaniel tells them he’s not looking for a princess—he’s looking for a prince.

Several passionate kisses are exchanged. Giselle comments on how beautiful an abstract nude sculpture is. She and Morgan have a conversation about the one thing boys are always after.

Prince Edward wields his sword on a few occasions, stabbing a bus, holding the blade to a man’s throat or pointing it at Robert. Nathaniel torments the little chipmunk who’s trying to help Edward find Giselle, holding a knife to its throat and hanging it from a hanger in the closet. A sword is also put to the queen’s throat.

[Spoiler Warning] Giselle bites a poison apple and falls to the ground with an ashen pallor. The wicked queen, in dragon form, blasts through walls and generally scuffs up the urban terrain around her before dragging a man to the top of a skyscraper. The scene is pretty tense as a couple of the main characters almost fall to their deaths—and the dragon does fall to hers, exploding into colored sparkles on the street far below.

At least one interjection each of “oh my god,” “oh my gosh” and “jeez.” Easily repeatable name-calling includes the words “idiot,” “fat mook,” “hag,” “viper” and “worthless.”

Nathaniel offers a poison cocktail to Giselle. After several failed attempts at poisoning her, the man drowns his disappointment with a martini while sitting in a bar.

The 6-year-old Morgan snags her dad’s credit card from his sock drawer and uses it to go on a shopping spree with Giselle. A homeless man steals Giselle’s tiara.

Bodily functions get screen time via a peeing poodle and a pooping chipmunk.

When writer Bill Kelly handed Disney his original screenplay for Enchanted, it had Giselle stepping out of her animated wonderland into a real-world bachelor party where she was mistaken—because of her royal getup—for the party’s stripper entertainment. And I’m sure that fans of such sordid flicks as Good Luck Chuck and Knocked Up would say that a send-up of Disney’s fairy-tale genre could have been funnier with that kind of mean-spirited mindset. But they would be dead wrong. And thankfully, wiser heads and years of rewrites have prevailed.

“It was a racier, R-rated movie,” director Kevin Lima (102 Dalmatians, Tarzan) told USA Today. “It took the studio time to rediscover the heart of the story.”

The Enchanted that has finally made its way to the big screen is a charming, deconstructionist fantasy that’s filled with just the right balance of music, warm wit and plucked heartstrings. The cast is terrific—particularly Amy Adams with her spot-on depiction of an animated Giselle brought to live-action life. The six musical theater numbers by Alan Menken and Stephen Schwartz are whimsical and flow in and out of the spoken scenes brilliantly. And the story is simple but captivating.

Slugs appear on this blooming flower in the form of a couple of toilet humor gags and “gay” winks. And there are a few too-violent moments involving the villainous henchman. Also, as is typical of the far-far-away-land genre that inspired this adventure, the vainglorious Queen Narissa (complete with form-fitting black gown and bulging cleavage) does quite a bit of damage as she casts spells and morphs into a gigantic dragon.

Those slugs are nearly flicked away—but not quite—by the movie’s solid support for keeping a level head in romance and avoiding the folly of mindless infatuation. It speaks of the healthy tension between accepting things as they are and dreaming of something better. And it strongly affirms lifelong marriage and points to the painful consequences of divorce. (Not to mention Edward’s bravery and magnanimity, Giselle’s quintessentially desirable naiveté, and Robert’s patience and kindness.)

Unlike the more heavily slimed Shrek movies, then, Enchanted emerges an endearingly gentle riff on past princess tales that is equal parts parody of and homage to Disney’s classics.