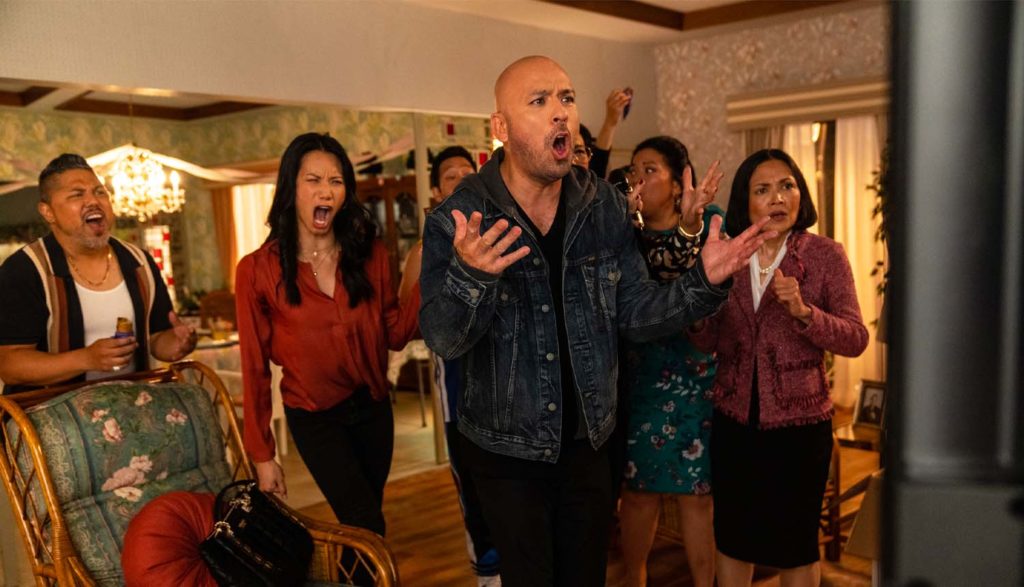 It was great to land the job, but having to repeat that slogan everywhere he goes is just a tiny, itty-bitty bit … grating.

The cool thing now, though, is the fact that he’s got a chance at a sitcom. It’s a second-fiddle, goofy-neighbor role, but, hey, it’s a sitcom! And that would improve everything in his life. Especially his bank account. And as a divorced dad, that would be a very important improvement.

But it just so happens that this coming weekend is Easter Sunday. So, Joe has to put the sitcom worries aside (yeah, right) and take his teen son to a family gathering—one day of church, picnics and dinner with his various family members. And it’d be a stretch to say that he’s looking forward to it.

For one thing there’s the five-and-a-half-hour drive with his son, Joe Jr., who’s been a bit prickly lately. Then there’s the fact that Joe’s mom and her sister, Tita Theresa, are constantly at each other’s throats. The rest of the aunts, uncles and cousins are just generally crazy. And then there’s Cousin Eugene, who’s up to his eyeballs in debt to a local thug who may or may not be involved in selling illegal narcotics.

Sigh. This could be one of those crazy family gatherings to remember. Or maybe, one that Joe will really, really want to forget.

Once you peel back the onion layers of Joe’s family struggles, you find relatives who really care about each other. They argue and fight—not to mention foolishly create huge problems that don’t need to be there—but they also step forward to love and protect other family member when the need arises. (They even pony up thousands of dollars on the spot to help someone in dire need.) Everyone—from Joe’s angry son to his mom and aunt—eventually apologize for negative actions or choices they’ve made.

Easter Sunday also makes it clear that the strength of a family unit can support and bolster its loved ones in any emergency if the members simply step back from nit-picky problems. Joe—whose father left when he was little—tells his single mom that the difficult things she made him endure when he was young made him a stronger man.

While at church, Joe and the pastor have a conversation about the pastor’s song (that Joe never helped get published) called “Oops, God Did It Again.” Later, the pastor calls Joe up and asks him to say some words during the service. Joe agrees, but he breaks into a comedy routine in the church. He tells jokes about Jesus not going “home” for Easter and having heated discussions with God. He also makes odd jokes about Jesus dying on the cross, comparing that sacrifice to his son “dying” when he loses access to his cellphone. That string of lightly offensive jokes leads into comments about family being a “mess” and squabbling at get-togethers such as Easter.

Joe and his cousin Eugene spend time staring at and snidely commenting on a statue of a teen Jesus dressed in royal garb. Joe’s mom says, “One day baby Jesus will save you,” and the guys quietly sneer at that idea. Joe jokes that God gave Filipinos karaoke to help them through family conflicts.

Joe is pulled over by a policewoman named Vanessa whom he used to date. She tells Joe’s son that “back in the day” they were very intimate with each other. “I coulda been your momma,” she notes. And later, Joe asks if they might date again, and they share a few sexually winking quips.

And while visiting the family, Joe Jr. meets a teen girl neighbor whom he finds very attractive. The two grow closer during the day together and eventually hug. She kisses his cheek.

Joe’s Tita Theresa tends to wear very tight-fitting clothes and low-cut dresses. Joe is patted down before entering a secure area and he grunts, “You don’t have to squeeze that!” Vanessa makes jokes about the physical consequences of giving birth to a big-headed baby. One of Joe’s uncles puts a bottle of Viagra into a gift box being sent to the Philippines.

A local thug, Dev Deluxe, and his “henchmen” hold guns on people and threaten to shoot Joe and his family members. In fact, they do shoot a full-sized wooden cutout of Joe. They pursue Joe and others in a car chase through the streets of town—the cars swerving and sliding through streets and corners dangerously.

Joe later punches Dev in the face and knocks him out. After that, Joe has a panic attack and passes out, to wake later in the hospital.

Though this pic feels like it lands on the lighter side of today’s comedy divide, it still contains one f-word and some 16 s-words along with a handful of uses each of the words “d–n,” “a–,” “b–ch” and “h—.”

God’s and Jesus’ names are abused more than 20 times (four of those combining God with “d—n”). There is a crude reference to male genitalia and a use of the word crap. Someone flips an offensive hand gesture.

Joe is the well-recognized TV spokesman for Budweiser Zero. We’re shown his commercial several times, and people who recognize him constantly ask him to pose and say his slogan. We see his family members drinking another brand of beer with their picnic lunch and later at dinner.

Joe’s son is on the cusp of flunking out and being put on academic probation. And Joe is partially to blame since he hasn’t been the most attentive of dads. Joe and his cousin attempt to sell stolen items to settle Eugene’s debt. And we learn that Eugene has been, in essence, stealing from someone for a while.

There’s a running joke about Joe’s agent who continually lies.

When you hear the title Easter Sunday, you might think that this is a pic with some sort of faith component on its menu. And there are a number of mentions of God and Jesus in this B-grade film’s dialogue. But those references tend to show up in the form of lame (and moderately offensive) one-liners more than anything else. (In fact, stand-up comic lead Jo Koy is at his least funny when he’s forcefully shoehorning anemic stand-up routines into this pic’s storyline.)

If anything, the Easter holiday here is just an excuse to gather a Filipino family together for some homemade dishes garnished with ridiculous buffoonery and unexpectedly crude language. And this film hits that cinematic bull’s eye with all the marksman aplomb of William Tell himself.

It’s not all nonsense and folderol, though. There are some nice moments near the movie’s end where the collected company calms down a bit and lauds the craziness and strength of family with some sincere, smile-worthy moments.

Getting to that point, however, isn’t always as flavorful as the onscreen Filipino cuisine often looks.