Dr. Seuss’ The Cat in the Hat 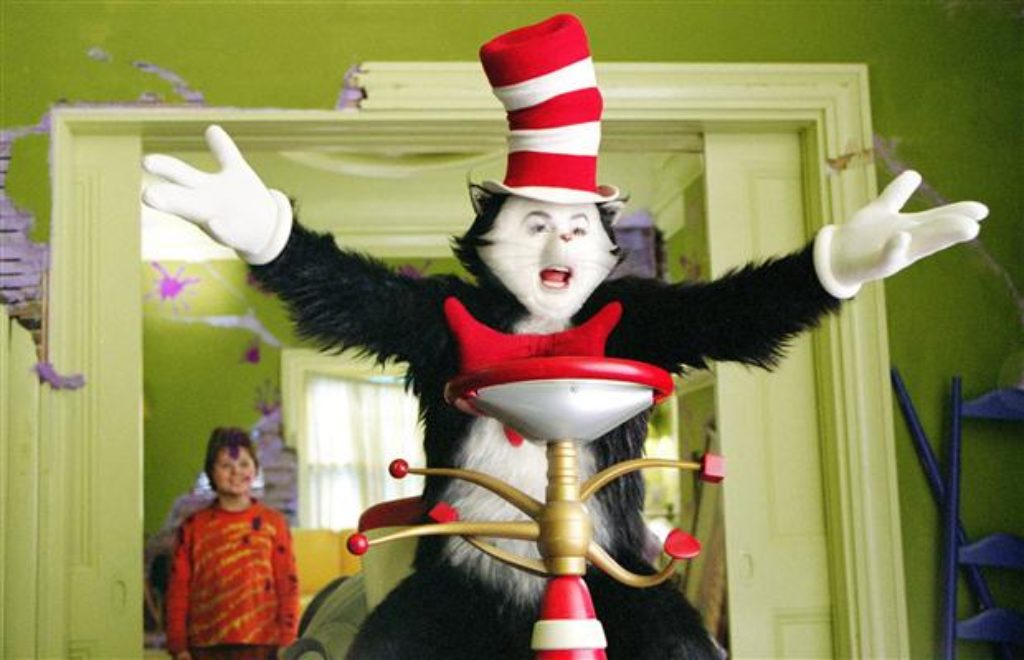 Conrad is a rambunctious 12-year-old boy who tends to make huge messes in the process of entertaining himself. By contrast, his younger sister, Sally, isn’t at all spontaneous or fun-loving. She’s controlling, obsessively organized and so annoyingly obsequious that she has alienated most of her peers. Meanwhile, the sibs’ single mom tries to juggle parenting, a real estate career and a romance with Lawrence Quinn, the scheming louse who lives next door.

One day, Conrad and Sally are left in the “care” of a rotund, bespectacled babysitter named Mrs. Kwan, who can’t seem to stay awake long enough to complete a sentence. That’s when they’re visited by a six-foot feline with a penchant for mischief. He calls himself the Cat in the Hat. With the help of impish whirlwinds Thing 1 and Thing 2, the Cat proceeds to make jokes and turn a spotless house into a disaster area. Can the kids get their home back in order before the guests arrive for their mother’s important business party?

Anyone who has read the classic children’s book by Theodor Geisel (aka Dr. Seuss) knows that everything is back in place when Mom sets foot in the door. Even so, this film adaptation by the producers of Dr. Seuss’ How the Grinch Stole Christmas has a number of off-color surprises. Families with young children might find themselves echoing a character from the book who said, “I do not like the way that they play. If mother could see this, oh what would she say!”

The family’s pet fish provides a moral conscience, though it’s debatable whether the movie buys into it. For example, he calls the Cat’s wild tricks “MTV-style flash at the expense of content and moral values.” That’s a pointed, accurate assessment of MTV, but the kids side with the Cat, implying that substance and morality can’t trump something that’s a lot of fun. Still, the Fish makes a good point.

Lines emphasize the need for parents to be able to trust their children. A rough mother/son relationship early on eventually leads to Mom saying of Conrad, “He’s a good kid and I believe in him.” Sibling rivalry also ends well. Rather than trying to implicate one another after the house has been wrecked, Conrad tells Sally to take cover while he explains his irresponsibility to their mother (“This is my fault. I’ll take the blame”). Sally replies, “This is just as much my fault as yours. I’ll share the blame.” Conrad calls himself an idiot for his habitual disobedience and ponders, “Why do I always do the opposite of what I’m supposed to do?” (families that do go can apply Ephesians 6:1-3 and Romans 6:14-25). We’re also reminded that it’s important for a person to learn from his mistakes.

A blink-and-you-miss-it moment finds the Cat in a lotus position chanting a single “ohm.”

When the kids ask the Cat, “Where did you come from,” the sarcastic animal begins to explain the mating process and is interrupted just short of describing intercourse. He picks up a photo of the children’s mom which rolls out like a centerfold, eliciting a lusty purr as his hat and tail go erect. He addresses a garden hoe like a promiscuous girlfriend, calling it a “dirty ho” before softening and assuring it of his love. In a Seussian nightclub, the Cat ogles a shapely blonde in a provocative outfit (a cameo by bad-girl hotel heiress Paris Hilton). There’s partial nudity when, playing up the stereotype of repairmen who can’t keep their pants all the way up, the Cat leans over and reveals the upper third of a bare bottom.

The Cat cuts off his own tail with a meat cleaver. Quinn plummets from a great height and lands in a sea of purple ooze. The Cat gets treated like a piñata by children at a birthday party who whale on him with bats. One rather large boy wallops him in the groin. Other physical gags involve children getting batted about by the Cat’s tail, a snoozing Mrs. Kwan being ridden down stairs like a toboggan, the Cat punching an unseen elephant, and a fracas among politicians on TV.

One of the script writers, Alec Berg, says of his star, “What Mike enjoys more than anything else is, ‘This is dirty, but I’m not going to say the word.’ It’s the clean insinuation of dirty things.” Nowhere is that more apparent in Cat in the Hat than with language. There are no actual (American) profanities, but Myers and Co. come close a few times. Quinn calls Conrad a “snot-nosed son-of-a- [Conrad’s mother walks in] wonderful woman.” After realizing he has caused bodily harm to himself, the Cat yells, “son of a …” and gets bleeped by imaginary censors before finishing. He does use the British profanity “bloody,” and exclaims “dirty ho!” when he sees a mud-encrusted gardening tool. Without saying it, the Cat alludes to an acronym that spells out the s-word.

The Cat tells Sally to quit smoking so many cigars, and Conrad to stay “off the sauce.” Quinn hijacks a six-pack of Miller Lite from their mother’s fridge.

There are visual and verbal references to urination. A dog wets on a fire hydrant and later befouls a man’s lunch. When the cautious goldfish warns the children not to join in the Cat’s irresponsible games, the Cat says, “You gonna listen to him? He drinks where he pees!” There’s belching by Quinn and the Cat, as well as a mention of flatulence. The Cat’s hair balls become slimy flying objects. The Cat relies on a barf bag twice. The audience was audibly grossed out when Quinn took off his girdle and revealed a flabby, hairy gut. He’s also shown picking his nose. Conrad lies to his mother in an attempt to get his sister in trouble. Although Quinn is selfish, deceitful and antagonistic, Conrad’s blatant disrespect toward this adult could send the wrong message to children.

The Cat in the Hat is a good-looking film. It should be since it was helmed by acclaimed production designer Bo Welch (Edward Scissorhands, Men in Black II, Batman Returns, Beetlejuice). Welch does an excellent job of recreating the cheery pastel universe and Salvador Dali-esque accessories of Dr. Seuss. Even the opening credits are a clever homage to the source material. Unfortunately, that’s as interesting as it gets. The plot draws from the popular books The Cat in the Hat and The Cat in the Hat Comes Back, but even then it’s a pretty thin story for anyone over 10. Spotless home gets trashed. Cat cleans up. Family ends up better off than it started. That would be fine if the jokes were restrained enough for the grade-schoolers Seuss had in mind—not dumbed down, mind you (there are some funny, sophisticated jabs at cultural targets), just not so risqué.

“It’s sweet, but it also has a lot of edge,” says Welch, who couldn’t believe his film managed to avoid a PG-13 on its first trip past the ratings board. “I really thought we’d have to trim a couple of scenes,” he told the L.A. Times. As for the “dirty ho” remark, he and others behind the scenes wanted to pull it, but Myers insisted it should stay. “I had a bet that the joke wouldn’t last, but it did,” Welch said. Don’t blame Myers, though, for the PG rating. Responsibility for that lands at the feet of the Mrs. Kwan-like Motion Picture Association of America, which fell asleep on the job.