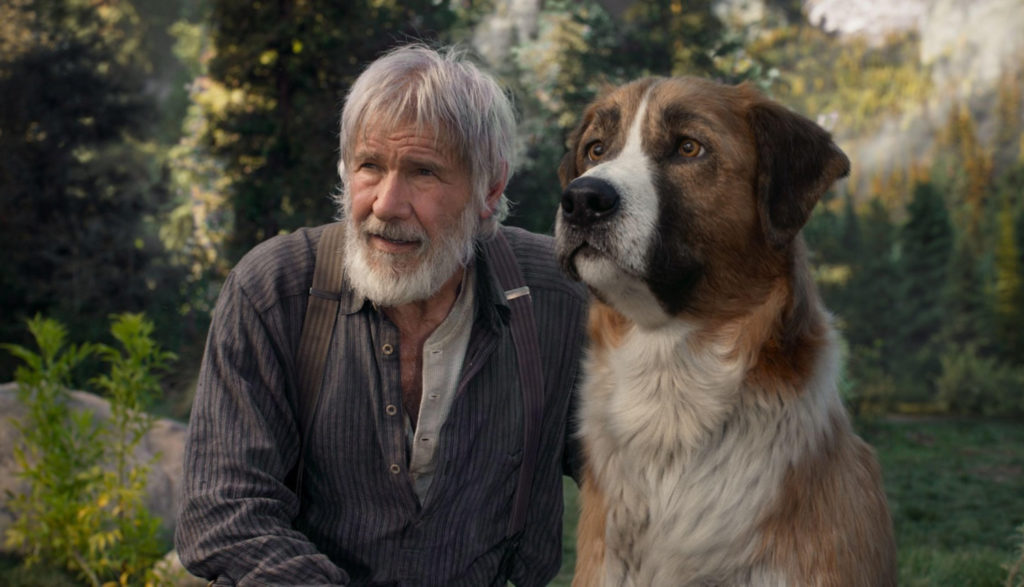 Sure, the big ol’ St. Bernard had a penchant for getting into trouble. But his owner, Judge Miller, always seemed to smooth things over for the rambuncious pooch.

But when Buck devours a birthday party meal, he finds himself in the proverbial doghouse: Maybe a night outside is the tough love Buck needs. When the Millers get up the next morning, however, Buck is gone. That’s because Buck’s been dognapped, and he’s locked in a crate on a train headed north.

It’s the late 1890s, and the great Klondike Gold Rush is luring adventures and treasure hunters alike to the wilds of the Yukon territory and neighboring Alaska. One problem: They don’t have enough dogs to pull sleds into the wilderness in search of that fortune.

Which is exactly why Buck’s in a box headed to “the edge of nowhere”: Scagway, Alaska.

Buck is soon purchased by a mail carrier named Perrault. He and his wife, Françoise, shuttle missives across Alaska. And they need a new dog. Buck chafes at his chilly new life at first. Soon, though, he’s exulting in his newfound strength and his emerging role as a leader of his pack. Life is hard now, for sure, but it’s still very good to Buck.

But when Perrault’s mail route is suddenly terminated due to the arrival of the telegraph, poor Buck and his pack find themselves on the cruel auction block again. His new master, Hal, is as different from Perrault as he could be.

Hal, we see, is the worst kind of master: a rich man who wants to get richer. He’s arrived in Alaska with his sister, Mercedes, in tow. Driven by his greed, Hal knows nothing of compassion—or common sense for that matter—pushing his new sled dog team past their limits.

Fortunately, a kind recluse named John Thornton has taken notice of Buck—as well as the shoddy character of the canine’s new master. John follows Hal and Mercedes into the wilderness, knowing it’s only a matter of time before he runs the dogs too hard and leads them all to a tragic end.

John eventually rescues Buck from Hal’s clutches (igniting the man’s rage in the process), then brings Buck home to nurse him back to health. John’s a good man, but a broken one. He’s immobilized by grief over the death of his young son years before, an event that cratered his marriage as well. Alcohol numbs his pain, but it can’t cure it (a truth Buck seems to understand better than John himself.)

As Buck grows in strength, John begins to dream again: Perhaps he and Buck could take the trip into the wilds John had hoped to take with his son. Perhaps he can find the peace that’s so eluded him.

And so John Thornton and his dog Buck head into the wilderness, both of them answering the call of the wild.

Three of Buck’s masters treat him kindly and are generous to the dog in different ways. Judge Miller loves Buck deeply but has a hard time disciplining the impulsive pooch. Perrault, in contrast, teaches Buck how to work hard and helps him move toward a deeper sense of purpose. John Thornton, meanwhile, rescues and rehabilitates Buck, and the two then plunge into the Alaskan wilderness together as something akin to equals, each helping the other.

Buck is a bighearted, loyal dog. Not only does he work hard for Perrault, he rescues Perrault’s wife, Françoise, from certain death when she plunges through the ice. He also looks out for the needs of weaker and older dogs on Perrault’s sled team.

John, for his part, gives Buck a long leash. The two of them journey deep into the Alaskan wilderness together, eventually settling in an abandoned cabin. Buck feels a growing pull toward the wilderness, the titular “call of the wild,” and John lets the dog roam and explore as he wants.

John also works to come to terms with his grief. At one point, he writes a letter to his estranged wife (with whom, it’s suggested, he hasn’t had contact in years). He acknowledges his weakness and regret for having abandoned her in the wake of their son’s death.

Perrault, for his part, is deeply committed to his work as a mailman. He often talks to Buck, and at one point, he says, “You see Buck, we don’t carry mail. We carry lives. We carry hope. We carry love.”

Buck repeatedly sees a vision of a huge black wolf with red eyes. Despite that ephemeral animal’s ominous appearance, the creature functions as a benevolent “spirit guide” of sorts for the dog, encouraging Buck in desperate moments and leading the dog (and his owner) to safety at other key junctures.

The spirit wolf’s presence seems to foreshadow Buck’s own journey toward gradually embracing the wild part of his dog identity. The movie suggests that the real theme of Buck’s life is his movement from being a dog who’s owned and controlled by men to becoming his own master. John seems to understand that truth as well, telling Buck, “Your ancestors used to roam here.”

John also muses philosophically about the wilds they sled through, saying, “We come and go, don’t we? This is always here.” John talks of how their shared journey into the wilderness has been one of healing for him.

Perrault’s relationship with Buck seems to inspire the arctic postman in an almost spiritual way, too. Françoise tells the dog, “I’ve never seen him believe in anything as much as he believes in you.”

In Scagway, a fiery female preacher with a Bible chastises ne’er-do-wells in the name of “our Lord.”

We see John shirtless as he bathes in a river.

Buck is initially quite timid, terrified of a thunderstorm, for instance. After he’s taken, a cruel handler beats him with a baton. The film’s narrator says of that moment in Buck’s story, “He was beaten, but he was not broken.”

Buck’s natural affection for and leadership of the other dogs in Perrault’s pack earns the ire of the team’s longtime leader, a husky named Spitz. This dog is arrogant and cruel. He kills a rabbit that Buck had let live; he bares his teeth and growls at other dogs in the pack. It’s clear that he’s a bullying leader who feels entitled to his place of privilege. Eventually, Buck and Spitz tangle, biting, scratching and attacking each other. It looks as if Spitz has gotten he best of Buck, but the opposite is in fact true.

Led by the spirit wolf, Buck guides Perrault, Françoise and the pack to safety through an ice tunnel beneath a frozen waterfall during an avalanche. Speaking of waterfalls, Buck also rescues a wolf who’s about to plunge over one, earning the acceptance of the pack he’s occasionally been running with.

A brief saloon scuffle involves traded punches; we learn that one participant in the fight is armed with a gun, which is against the saloon’s rules.

[Spoiler Warning] Remember the angry rich guy, Hal? He eventually finds John in the wilderness, mortally shooting him. John slowly bleeds to death (we see blood on his hands) with Buck staying right with him. Though it’s a sad scene, John is at peace with dying. John’s satisfied that he’s brought Buck into the wilderness where he can fully embrace the call of the wild. Elsewhere in this scene, Hal is trapped in a burning cabin and, it’s suggested, dies there as well.

John has an obvious drinking problem. He imbibes whiskey to numb his emotional pain. We see him asleep with a bottle at his feet and a glass at hand.

Buck, however, doesn’t think much of John’s drinking. The wise dog seems to know that it’s killing John, and so the dog dumps out a bottle of liquor at one point. John’s not happy, of course, but that “intervention” marks an important turning point for John, who begins to dream of bigger things instead of just dousing his grief with alcohol.

Later on, John hides a bottle from Buck in the rafters of a cabin so that the dog won’t dump it, too. At that point, though, John has quit drinking compulsively.

We see patrons drinking at a saloon. Some are obviously inebriated. Among Mercedes and Hal’s possessions packed onto their sled is a huge case of champagne.

Buck is badly mistreated on his journey to Alaska, being deprived of food and water for most of the trip.

Dog movies take direct aim at our hearts. Whether it’s Old Yeller or Lassie, Benji or Marley, Hachi or Hooch or Beethoven or Togo, lovable canines invite audiences to enter into some doggone good stories. (Though you’ll often need a case o’ Kleenex by the time credits roll. I’m looking at you, Old Yeller and Benji. And Marley. And Hachi.)

Yes, Buck’s adorable, friendly nature is simply irresistable. Yes, his perilous exploits plunging through Alaskan snow are a sight to see. But there’s one big difference here: Buck, you see, is a CGI dog. (As are his furry friends and enemies). At times, Buck’s digitized DNA is glaringly obvious and slightly offputting.

That said, Jack London’s classic 19th-century dog story retains its resonance in the 21st century. Digital or not, Buck’s a good dog, the kind we root for as he goes up against various obstacles, setbacks and enemies. That mild peril, combined with some violence between humans, is among the main issues parents will need to navigate here. Buck’s spirit wolf guide is another, as it might be especially frightening to very young or sensitive viewers. We also hear a smattering of profanity, too, and witness John’s drinking problem (which Buck humorously “confronts”).

But those issues probably won’t be deal killers for most families of older tweens on up. And Harrison Ford’s craggy turn as a grieving old recluse lends this digi-doggy tale a satisfying shot of emotional heft.

The Call of the Wild may not be the best dog movie you’ve ever seen. But this classic man-and-dog adventure still has something to offer families looking for an old-fashioned, Disney-style escape.