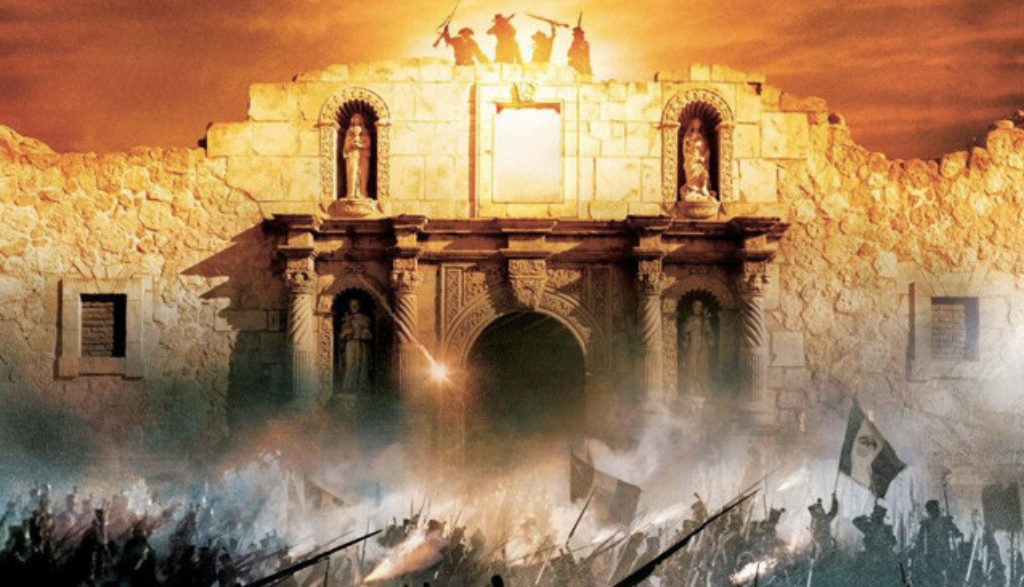 It’s 1836. Texas is still officially part of Mexico, but after Gen. Antonio López de Santa Anna seizes power and declares himself dictator for life, many Texians, as they call themselves, want to break away to form their own republic. Santa Anna leads a large force into Texas to put down the rebellion, and he heads for Bexar dé San Antonio, where he knows the rebels have a large cache of weapons and cannons.

The hard-drinking Gen. Sam Houston, appointed head of the Texian militia, sends Lt. Col William Travis and a group of volunteers to retrieve the cannons or, if necessary, defend the town. Assorted hangers-on accompany Travis, including the legendary Davy Crockett and Jim Bowie. (Famous for his knife-fighting abilities, Bowie’s “knife” can more properly be called a small sword.)

Travis is a bit of a martinet, and the volunteers would rather answer to one of their own, Jim Bowie. When the time comes, however, Travis steps up, takes command and rallies the men. Crockett wryly feels himself a victim of his own legend and is compelled to live out what everyone expects of him. (That legend leads to some comical moments when a group of Mexicans refuses to attack for fear of Crockett, who supposedly can kill mountain lions with his bare hands and leap across the Mississippi River.)

Thus the stage is set for the famous showdown at the redoubt called the Alamo. The 190 or so defenders refuse to surrender and hold off the Mexican forces for 13 days. Calls for reinforcements bring only a handful of men. Santa Anna, an arrogant, strutting peacock, is determined to wipe them off the earth to set an example to other rebels. After great bloodshed, he succeeds on March 6, 1836. But in short order he falls victim to his own conceit at the Battle of San Jacinto, where the Texians, under the canny leadership of Houston, “remember the Alamo” and defeat the Mexican army (in only 18 minutes, the film says), winning independence for the new Republic of Texas.

Courage in the face of overwhelming odds is the hallmark of this film. Sticking to one’s principles in the face of death gets strong play, too. The men support each other, and some die while saving lives.

A Mexican woman nursing the very sick Bowie refuses to leave, even when given the chance. Apparently, she is his sister-in-law, and she tells him, “We’re family.” (Her fate is unclear in the end.) Soldiers under Houston’s command obey orders, even though they don’t understand his plan and think he’s making a huge mistake. That obedience pays off in the victory at San Jacinto.

A defender shows mercy to a wounded Mexican soldier. One Mexican officer wants to show mercy to a few captured defenders. (He’s overruled by Santa Anna, who orders them executed.)

In a backdoor way, the sanctity of marriage is reinforced when William Travis divorces his wife in a heartbreaking scene where his young daughter, about five years old, doesn’t understand what’s happening; she waves goodbye with a smile as she leaves the room. His son, eight years old, understands perfectly well what’s happening and eyes his father with disappointment, anger and yearning as he’s handed over to be raised by another family.

The battle takes place in a Christian mission, so there are many crucifixes on the walls. The entrance to the main sanctuary (the famous structure that is the only remaining building today) is flanked by statues of Saint Dominic and Saint Francis. A woman lights candles in front of a crucifix and several small statues of saints. One defender says, “I humble myself before God, and there the list ends.” A nurse makes the sign of the cross with an egg over the chest of a sick man, then breaks the egg into a cup of water by his bedside. (What this is meant to signify is unclear.) A Mexican soldier crosses himself before battle.

A man asks if it’s true that Mexican men and women bathe together, and another slyly answers, “Cleanliness is next to godliness.” Davy Crockett, in relating a story from his Indian-fighting days, says they locked several villagers in a cabin and burnt it down. “We could hear them screaming to their gods,” he says, clearly bothered by the memory.

One defender admits to visiting whores, and one man insults another by calling him a catamite. (A catamite is the young boy kept by a pederast.) Santa Anna spies a pretty teen girl upon entering San Antonio. Later, he opens the doors to his quarters, and the young woman is in his bed, apparently there against her will. A few of the traditional outfits worn by the women feature low-cut blouses.

The battle sequences, while intense, are largely bloodless. No exploding heads or spurting blood here. Cannons blow down huge chunks of wall and men are bayoneted or shot, but no gore is seen. In one horrific scene, repeated several times, the defenders fire a cannon of grape shot (basically, an entire load of shrapnel) into the Mexican ranks, mowing down entire squads at a time. In an earlier scene, Santa Anna orders a group of rebels gunned down by a firing squad—in front of their families. At the end of the battle of San Jacinto, a dead Mexican is seen floating in the river in a pool of blood. Bowie brags about cutting out a man’s heart using his infamous knife.

The s-word is used three or four times, and a few other crudities make an appearance, mostly “h—,” “d–n” and “son of a b–ch.” God’s name is misused four times. Crockett makes several references to “Injuns” and “redskins.”

Gen. Sam Houston is a hard drinker and appears to be drunk in several scenes. After belting down a glass of fine whiskey, he says, “If it doesn’t burn on the way down, how do you know it’s bad for you?” The Texians are often seen drinking whiskey or mescal. One officer confiscates a bottle of whiskey, telling the defenders not to drink anymore since they need to be at their best—then he takes a swig himself. Jim Bowie, knowing he’s going to die, says, “I don’t deserve mercy, but I do deserve a drink.” Santa Anna and his officers toast each other with wine. Travis, when offered a drink, says, “I gamble, go to whores, run off on wives, but at drinking, I draw the line.” Several men smoke cigars.

One Mexican officer questions why Santa Anna wants to attack that night, endangering his men, when a cannon large enough to blow down the Alamo’s walls will arrive the next day. Santa Anna contemptuously responds, “What are the lives of the soldiers but chickens?”

Davy Crockett tells a grisly tale from the Indian wars. After a village of Indians was massacred, a few took shelter in a cabin, which Crockett’s men set on fire. (Clearly bothered by the incident, Crockett tells the listeners that after the cabin burned down, they found potatoes in the root cellar that had been cooked in the fire. Because he and the others were starving, they ate the potatoes, which has put him off the food ever since.)

The familiar story of the defense of the Alamo has been told on film three previous times: 1915, 1956 and, the one most people are probably familiar with, in 1960, with John Wayne playing Davy Crockett. Depending which version you watch, the defenders are either the Great White Hope holding off dark-skinned invaders (D.W. Griffith’s racist 1915 version), grim-faced heroes (1956) or, in the unintentionally hilarious John Wayne version, proto-Cold Warriors defending America’s honor from proto-commies.

Several preemptive faxes and e-mails denouncing the portrayal of the Alamo’s heroes in this version came across my desk in the weeks leading up to the movie’s release. They decried the description of Jim Bowie as a land swindler, Sam Houston as an alcoholic and William Travis as a wife-abandoner. Most outrageous, however, according to these missives, is Davy Crockett being taken prisoner, tied up and on his knees before Santa Anna. They say, rather, that he went down fighting in the thick of battle.

The filmmakers say they went to great lengths to be historically accurate, and based on research I found on the official Alamo Web site as well as the University of Texas historical archives, the portrayals are pretty close to the real thing. As for Crockett, there are conflicting versions of how he died. Either he was killed early in the battle, or his body was seen outside the Alamo’s walls, or he was captured but refused to beg for mercy, dying honorably. (This provides a droll scene in the movie, where Crockett, bound, on his knees and defiant to the end, offers his condolences to the Mexicans for their eventual defeat.)

None of this warts-and-all storytelling detracts from the men’s heroism in battle. Rather than being plaster saints, they’re real, believable characters. If parents of older teens are willing to navigate some of the violence, The Alamo can serve as a fine discussion-starter about flawed humanity, bravery in battle, the courage of one’s convictions and the fruits of arrogance and folly.