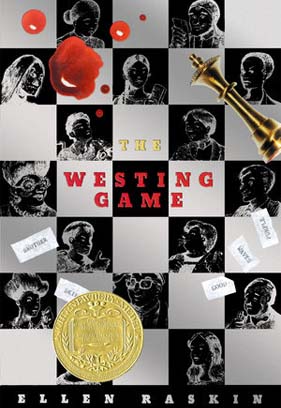 Young Turtle Wexler is one of a group of 16 strangers who are called to a deceased rich man’s house. They all live in the same apartment building. And they all just happen to be named as potential heirs to a $200 million fortune. They simply have to play a game together and discover which of them is also the dead man’s killer.

You wouldn’t call Tabitha-Ruth “Turtle” Wexler a great detective. (In fact, you’d probably call her a great kicker-of-shins, if you ever made the 13-year-old a bit angry.) Nor would you—after meeting restaurant owner Shin Hoo, or sweet and gentle old Mrs. Baumbach or the former boxer, Sandy McSouthers—begin calling for a rousing game of Clue.

None of these people seem destined for mystery solving. But all of them, and 12 others—all of whom live in the newly opened apartment complex of Sunset Towers–have been called upon to do that very thing. They’re 16 people asked to solve a mystery—or, more fairly, a series of mysteries—with promise of a great reward.

The first mystery they were faced with was a community invitation to the home of the very wealthy but recently deceased Samuel W.  Westing. The second conundrum was the fact that they all were named as possible heirs to the man’s $200 million estate. And the third bit of intrigue is that they’re asked to randomly partner up, each pick up a provided envelope of seemingly random word clues and then figure out … who murdered Sam.

“It’s not what you have, it’s what you don’t have that counts,” the game-loving Westing noted in his will. That, of course, makes each person wonder what everyone else had. For that matter, what unknown secrets does each person have? Why were they chosen? And how did they all come to live in the same apartment building—a building owned by Westing himself?

As Turtle talks to others and thinks things through over the next few days, she becomes certain that the whole affair is a mind game of some sort. Think about it: There was a chess board in the rich man’s game room where they were all gathered.

It’s a board made up of 16 black squares and 16 white squares.

A game of opposing teams filled with strategy, subtle deception and power.

But, Turtle wonders, is she a knight? A queen? Or just another pawn?

One of the people in the Sunset Towers mix is an elderly woman named Mrs. Crow. She’s a “severe”-looking woman who views the world through a very “fundamentalist” Christian lens. As such, the people around her find her a bit off-putting. We see the woman praying and humming a hymn. And with time we are shown her softer side—including finding out how her faith changed her life and the fact that she runs and serves at a local homeless shelter.

Part of a poem reads: “Forgive me, my daughter, God bless you child.”

It’s mentioned in passing that another man is Jewish.

Some kids stage a prank on Halloween night.

You could say that Sam Westing is a person of authority because of his wealth and position. And he does aim to use his death, in a way, to get the others—who we eventually find do all have loose ties to one another—to think about their own lives, choices and relationships. You could also see Westing’s game as the man’s means to make amends for some of his own past failings.

Turtle’s parents, Grace and Jake Wexler, have their own personal struggles to deal with. And that spills over to the kids. Jake is fairly distant and wrapped up in his work. And while Grace adores and praises Turtle’s beautiful sister Angela, she nearly snubs Turtle. As a result, Turtle is often on the outside and a little angry and Angela, while kind, is nearly powerless to express her true desires.

In the course of the game, however, all of the Wexlers are confronted with who they are and each becomes a better person—and they become closer and more loving as a family, too.

That same self-awareness challenge impacts nearly all the people participating in Westing’s game. Someone steals things from the Sunset Towers residents, but eventually admits her guilt and returns all the items.

There is, however, some alcohol flowing in one form or another. Sandy McSouthers has a flask of Scotch that he takes swigs from. Grace and Jake Wexler go on a date and drink two bottles of wine and that makes Grace quite tipsy. Mr. Hoo serves drinks in his restaurant and adults drink mixed drinks at a party. Turtle asks for some Bourbon on a cotton swab to numb an aching tooth. (And someone jokingly comments about the booze on her breath.)

In the course of the game, someone plants small explosives that cause kitchen explosions in the Sunset Towers. A woman fractures her leg. An explosion in a school science lab drives a shard of glass into someone’s shoulder. And two different fireworks explosions injure both Angela and Turtle. Angela has her face gashed and Turtle’s hair is singed badly. An entire building is set ablaze by fireworks at one point.

Sandy talks of his boxing days and mentions that “I still get some pretty bad headaches and my brain gets sort of fuzzy.” Jake Wexler is a podiatrist who cuts off a woman’s corn in one scene and she limps around painfully after that.

[Spoiler Warning] Turtle sees what she assumes is a dead man in bed. And we see a man supposedly choke on something poisonous and die. (Both incidences turn out to be staged.) We do hear of someone who tragically committed suicide, and about the horrible impact that choice had on everyone around this individual. A very elderly man dies of natural causes.

When Grace and Jake draw closer once again as husband and wife, it’s implied that they become more physically intimate (though nothing is ever seen or heard).

What did you think of the Westing game? Did you figure the mystery out? What do you think Sam Westing had in mind when he created and set up the game?

Each of the participants shifted their lives because of the game. Why do you think that was? What about our lives? Are there times when we should stop and reevaluate our choices?

Proverbs 3:5-6 says “Trust in the Lord with all your heart and lean not on your own understanding; in all your ways submit to Him, and He will make your paths straight.” What or who do you think the characters in The Westing Game were leaning on? How would shifting focus to God have helped them? How does it help you?

There was a lot of early emphasis put on the Westing money in the beginning of this story. But how important was it to everyone by the end? Were there more valuable things they discovered? What do you think Turtle found most valuable? What was your favorite part of this book?

The Westing Game was published over 40 years ago, and it’s a solid choice for young readers looking for a classic kids’ mystery. The award-winning book raises some interesting questions about the things we value in life.