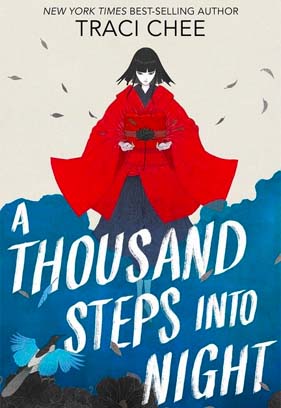 Otori Miuko is an innkeeper’s daughter who’s clumsy, plain and, she feels, far from special. But then, after being kissed by a demon and cursed, she finds herself becoming “special” in all the wrong ways. Now she must run from a deadly demon, that wants to claim her as his own, and break the curse consuming her.

Seventeen-year-old Otori Miuko believes that she’s nothing special and completely unremarkable. In fact, she feels a bit too clumsy, a bit too plain, and far too loud for the world in which she lives.

As far as the villagers are concerned, the only thing that speaks well of Miuko is the fact that her father runs the only remaining guesthouse in the village of Nihaoi. And Miuko is seen as a somewhat loving and dutiful daughter. She at least hasn’t run off like her shameful mother did.

The fact is, however, Miuko wants to be more than simply dutiful. She wants to be able to walk the streets of town by herself without enduring stern looks and whispers. She wants life, adventure and happiness. But all of those things seem well beyond a girl/servant like herself.

Ah, but the kiss she receives isn’t one of love. She’s walking home at dusk after buying a new set of teacups (since she clumsily broke the only uncracked cup in the inn’s set) and the world shifts. Spirits begin moving angrily about her. And a woman, whose flesh is an eerie indigo blue, approaches and kisses her.

Now, Miuko is special. Special and cursed. And, starting with the soles of her feet, she begins, bit-by-bit, turning deep blue herself. She’s becoming a shaoha, a malevolent demon with the power to suck the lifeforce out of any unfortunate creature she touches—just as the grass beneath her bare feet turns black as she walks through it.

But, believe it or not, that’s not the worst of Miuko’s woes. For when she returns home, she is attacked by the village priests and shunned by her own loving father. And then a demon—an evil entity possessing and wearing the body of the local royal heir—notices her and wants to have her for his own.

Together we will destroy the world, he tells her.

That, however, will require a fantastic journey. She must manipulate spirits, lie to men and battle with monsters. She must find a way to break this curse before it consumes her spirit and transforms her into something evil and ravenously deadly.

Based on Japanese mythology, this fantasy tale is filled to the brim with an often times dark spirituality of gods, spirits, ghosts, demons, lost wandering souls and spells of all stripes.

For instance, Miuko interacts with a party full of different entities, including devious monkey spirits, a spider woman spirit with six arms, and a blue-skinned spirit that has a tendency to dissolve into small blizzards. Miuko encounters a spirit of despair, a snake-like creature with the head of a woman.

Miuko also befriends a thievery-focused bird spirit—named Gieki—who can transform himself into a number of different shapes including a magpie and a human teen guy. Gieki joins Miuko’s quest and, along with several others, helps protect her. Some spirits are as huge as a mountain, others as small as crickets.

The demon, Tujiyazai, is a fiery devil-like creature that possesses a man’s body and can control men’s minds, sending them off to kill one another.

Miuko interacts with various gods as well. There are gods of each month and deities with various levels of power. The god of stars, for instance, is a massive entity with a humanoid form and thousands of eyes all over its body. This being can see all the many variations of time (and its alternate realities), and it can send people into different times.

While in a different time than her own, Miuko begins to lose her physical substance and become more transparent and phantom-like. She’s told that the only way to stay solid is to consume the lifeforce of others. She does so in small sips but refuses to consume and kill anyone, since she knows that would sacrifice her human soul. (As Miuko becomes more fully a demon, an inner demonic voice nudges her toward greater violence and deadlier choices.)

Human priests in this tale perform rituals that surpass space and time and cast spells that bind or repel spiritual beings. We see the ghostly remnants of young women who were murdered by a predator and buried beneath someone’s house. Creatures can curse others.

Miuko is given a small snuff box containing a cute cat spirit. But when this spirit interacts with live cats, it consumes their lifeforce,  just like Miuko.

Miuko’s father is a good man who loves his daughter, but he is also very much a man of the world in which he lives. Miuko explains that: “According to the laws of Omaizi society, a daughter belonged to her father, like a square of land or a sack of grain, to be used or sown to his benefit.”

In that light, when Miuko begins to change, her father shuns her and sends her away from their home. (He later apologizes and asks for forgiveness.)

Other men in authority, especially the priests, are much harsher in their condemnation of Miuko. And the authorities of the spiritual world are even more haughty and difficult to deal with. In fact, they think themselves well beyond the concerns of mere humans—even though they gain power from human worship. Miuko must repeatedly lie, manipulate and trick the powerful spiritual entities around her to get what she needs done.

On the other hand, Miuko does meet some people and priests who try to help her and make personal sacrifices in that process. One says, “Everyone needs everyone, and no one gets what they want alone.” Miuko also takes a young woman under her wing to protect her from the unfriendly world around them. Looking back on what she’s learned, Miuko tells the girl, “There’s so much more out there than this.” “For a girl?” the young woman asks. “For anyone brave enough to look,” Miuko replies.

Being brave enough to break free from society’s social limitations is a big theme here. And Miuko goes so far as to be willing to give up her soul for the sake of saving mankind at large.

There’s no foul language in this tale. But there is quite a lot of violence in various forms.

The fire demon Tujiyazai, for instance, repeatedly threatens to burn, kill or hurt anyone close to Miuko if she doesn’t obey his commands. He also takes control of people’s minds and has them battle and kill anyone nearby, even their own family, friends or fellow soldiers. He turns groups of spirits into marauding monstrosities. In the course of these attacks, cities and temples are set ablaze and leveled—seemingly killing thousands of people. We hear about a temple being attacked and men dying in bloody ways

Miuko is battered and scarred repeatedly throughout the story. As she becomes more demon than human, she’s stronger and her body heals more quickly, but we still read of her being chased, pummeled, slashed and shot with arrows. She’s nearly run over by a man on horseback and knocked off a bridge into the river below.

We also find out that humans, wanting to have someone murdered, can summon a malevolent demon by carving a name into their own flesh. Several people do that, and the bloody slash appears on Miuko’s own body as she is summoned. In one case, she carves up her own arm in an attempt to eliminate someone.

A father physically abuses his daughter, pulling her around by her hair. A small-town official is revealed to be a murderer who killed young girls. His own mother would cover up the atrocity by burying the abused and butchered girls under their house.

Miuko thinks about the idea of marrying, though she doesn’t believe herself to be attractive to the opposite sex. The demon Tujiyazai, however, finds her very appealing (especially in her dark blue form) and he speaks seductively to her, asking her to join him in his quest for total dominion of mankind. And when he gives her a new set of robes, he stands watching as she is forced to strip to thin undergarments before him.

Miuko is summoned to a barn where a not-fully-dressed couple have been interrupted in an intimate moment. Were told that several articles of clothing have been tossed aside, but the couple’s appearance isn’t fully described.

It’s also implied that some young women were sexually abused before being killed by a murderer. When Miuko is confronted by the spirits of these slain women, she sees flashes of a “naked torso.” Miuko’s clothes are torn and ripped during a struggle with this killer. Someone else talks of climbing to a window and “peeping” in on servant girls as a boy.

The story features several alt-gendered characters. One priest, for example, was a man but now is a woman. Another is non-gendered. And the spirit world reflects that choice with a few non-gendered individuals being referred to as “they” as well.

Author Traci Chee uses ideas inspired by Japanese mythology to create a fantasy world filled with a swirling pantheon of gods, spirits, demons, spells and curses. This much-praised adventure is broad fantasy, and it offers analogical encouragements to young women who want to excel and push back against oppressive influences and societies around them.

For all of its positives, however, readers and parents should note that the world and spiritual side of the tale is oft times bloody, deadly and very dark.