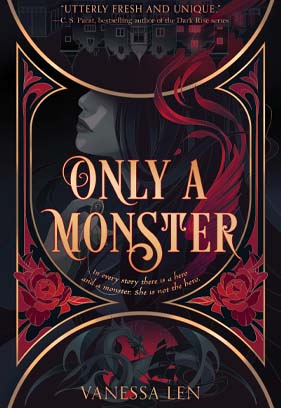 Sixteen-year-old Joan Chang-Hunt knew her family was a bit quirky. But then she found out they’re much more than that: they’re monsters. And that includes her. Oh, and that really cute guy she’s been crushing on? He’s a monster-killing hero. It’s going to be a hard summer.

You always see yourself as the hero of your own story, right? But that isn’t working out so well for 16-year-old Joan Chang-Hunt. Which is ironic in a way, because her expectations for this summer were hitting all sorts of heroic highs.

Sure, whenever Joan spends time with her mother’s family in London, it’s generally a mix of crazy and sublime. I mean, her Gran and other family members in the Hunt clan are as eccentric and quirky as London is cool. This summer break, however, was shaping up to be pretty stellar.

Not only was Joan having fun, but she had landed a nerdy summer job at the nearby Holland House—a place that was part tourist attraction and part history lesson all wrapped up in one grand old estate. And then, then Joan met Nick. Tall. Kind. Handsome. Smart. And, of course, British. Yeah, Nick checked off nearly all of Joan’s list of required things for a boyfriend. And he was obviously into her, too.

They even made arrangements for their first date.

Then everything went sideways.

You see, Joan’s gran had always told her that those on her deceased mother’s side of the family line were “monsters.” And Joan had smilingly taken that statement as a funny joke between the Hunts. But it wasn’t a joke at all.

When Joan somehow zips ahead in time one day—missing her highly anticipated date with Nick, no less—Gran sits her down for a long talk. It turns out that the Hunts are one of 12 families of actual monsters in the world.

These monsters have the ability to touch humans in a certain way and steal hours, days, years of their life away. And that, apparently, was what Joan had accidentally done: She touched someone and used eight hours of his life to jump into the future.

It was all a little difficult to wrap her head around. Joan didn’t look like some vampire-like beast. And she certainly didn’t feel like a dangerous plague against humanity. But it turns out that looks and feelings can indeed be deceiving.

Oh, and speaking of looks and feelings, Joan soon learns something else. Her beloved cute boy, Nick, is more than he appears to be, too. It seems that he’s a legendary monster-slayer: a hero trained to eliminate anything that threatens humankind.

And after one insane night of bloody mayhem that shockingly leaves her family dead, Joan has to face yet another terrible fact. If she has any hope of fixing everything that’s been completely broken in her life, Joan will have to embrace her abilities and her monstrousness. She has to find a way to rewrite the story of this terrible summer.

Oh, and it’s a story where … she’s definitely not the hero.

The prevailing powers in Joan’s newfound world have a spiritual vibe about them, even though there’s no direct tie made to any light or dark spirituality. For example, the different monster clans each have their own traits and special, magic-like abilities.

One monster clan, for instance, can compel others to tell the truth. Another has the ability to transport animals (which they call “familiars”) with them when they time travel. There is a Monster King who rules over the 12 clans with great power. He resides in a royal court that is isolated outside of time. When a monster speaks against him, it’s called a “blasphemy.”

The monster time-travel ability has certain rules limiting travel to eras before and after a monster’s actual lifetime. If a monster appears in the same timeline where she already exists, she’s said to “disappear into the void.” It’s said that the timeline is almost self-aware and that it always tries to correct itself.

Gran and all of Joan’s other relatives are kind and loving. (Though Joan crosses paths with a younger version of her grandmother who isn’t so warm.) And Joan runs into an Asian clan whose leader is at least patient and open, if not welcoming. Most other elders in the various monster families, however, are cold, unapproachable and sometimes threatening. In fact, an elder in the Oliver clan happily—and ruthlessly—tries to kill Joan and any other Hunt he encounters. Joan barely escapes with her life after stumbling upon him and his family.

Joan saves this man’s son’s life, and they work toward the same cause for a while. This team-up—with an Oliver named Aaron—is a difficult one at first. But eventually Joan and Aaron develop a reluctant friendship. Joan’s cousin Ruth gives aid to Joan and her cause, too.

Even though Joan accepts her role as a monster, she keeps heroically trying to set things right and seeks a way to stop all the killing. Rather than take an easy path, she struggles to change the past and save her family despite everyone’s claim that it’s impossible to do so.

There isn’t an abundance of foul language in the story, but when it shows up it’s often harsh. There are some nine f-words, several s-words and a misuse of both God’s and Jesus’ names.

Only A Monster begins with a fairly lighthearted vibe, but soon devolves into something much darker. An early scene shows people being battered, stabbed and slashed with sharp blades. That quickly leads to a massacre in which monsters of every stripe are killed in bloody ways. Joan tries to staunch the bleeding of a loved one who slowly bleeds out and dies.

From there, Joan runs off in an effort to change things while surrounded by dangerous forces. As such it seems she’s always on the edge of potentially deadly peril. Elsewhere, we see a man being tortured and tormented. And it’s stated that he went through nearly 2000 time-manipulated episodes of being torn and battered, as well as repeatedly witnessing his family being murdered.

Some people drink beer and alcohol. Joan encounters one man who drinks heavily in an attempt to drown his sorrow.

Joan kisses the hero, Nick, on several occasions. They both exhibit a strong attraction to each other—even though, in a way, they both cause each other a great deal of emotional pain as well.

Joan and Aaron Oliver develop a close relationship, too. It never becomes romantic, but you can see that it might have under different circumstances.

Joan meets a man who mourns the loss of his beloved husband.

Only A Monster is a popular fantasy novel with an interesting premise. It questions the stock ideas of heroes and villains, frowns at the bad choices we make, and challenges readers to overcome difficult situations in their life. One character notes, for example: “We can’t change what we’ve done, but we don’t have to be the people we’ve been made into.”

That said, this adventure can feel dark at times, it gets bloody, and the language can be surprisingly foul.