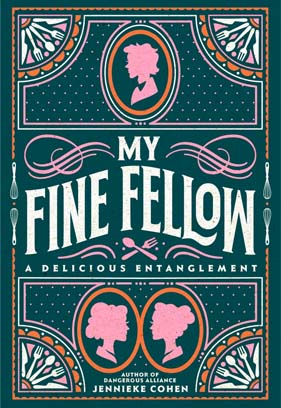 Penelope Pickering and Helena Higgins decide to teach a street hawker all they know about the culinary arts. They’ll transform this rough-edged Elijah Little into a proper gentleman chef.

In the year 1833, 17-year-olds Helena Higgins and Penelope Pickering are at the top of their graduating class at the Royal Academy of Culinaria Articus. Not that Helena would ever let Penelope forget who is first and who is second.

Of course, Helena has never been what one would call the epitome of charm. And she’s totally unafraid of sharing her expertise in the culinary arts, along with the fact that she is well on her way to “becoming the foremost authority of their generation.”

To Penelope, however, that blunt confidence is Helena’s charm, at least as a friend and a fellow lover of food. For Penelope is quite skilled in culinaria herself. And the two young women push each other to broaden their understanding and test each other’s palates. So, when Helena lands on what she considers a brilliant idea for her final-year project at the London academy, Penelope can’t help but see the interesting possibilities.

The night before, they had met a pastry-hawking young man in the street markets. He said that he baked his own pastries in a borrowed oven, but his wares did hold some flavorful merit. Helena suggested that she, with her vast knowledge and a bit of time, could transform this pie-peddling rogue into a shop owner. No, more than that: a gentleman chef!

And the young man—one, Elijah Little—has agreed to the experiment.

So here they are now at Helena’s vast family home at Cavendish Square, preparing for weeks of intensive work. They will reshape Mr. Little’s skills, his manner, his wardrobe and his language all in an attempt to present him as a gentleman chef competing in the Royal Culinary Exhibition.

If they can do it, it will be nearly miraculous.

And Penelope can’t help but think—as she looks at Elijah Little and his openly appealing determination and almost handsome smile—that this might be just a little romantic, too.

There are no direct references to Christian faith other than the suggestion that England of the 1800’s is a Protestant Christian nation. They also note that laws were passed forbidding marriage of a member of the Royal house to a Catholic.

We find out that Elijah Little is Jewish. Even though Elijah doesn’t practice the faith, he clings to that important connection with his deceased parents. He carries their mezuzah—a small metallic case holding a parchment verse from the Torah—as one of his few objects of great value. (My Fine Fellow delicately weaves some historical facts about England’s Jewish communities and thoughts about people struggling under prejudice within its tale.)

Elijah is hesitant to share any of his faith or background with Penelope and Helena for fear of their possible antisemitic responses. The truth comes out eventually, and Helena doesn’t react well. But Penelope accepts Elijah fully and understands his hesitancy because of the prejudice of others. Helena grows in that regard.

We learn that Penelope has to deal with prejudicial attitudes as well. She looks White but is of mixed-race heritage: Penelope’s White English father and Filipina mother live abroad in order to protect their daughter’s prospects in London. (Their own families are at fevered odds over the marriage.) Penelope’s parents are loving and make every effort to connect with Penelope while she seeks her education and career.

On the other hand, we don’t hear much of Helena’s family other than the fact that they are traveling abroad with Helena’s brother—the rightful heir to the family fortune. They don’t appear to care what Helena does as long as she doesn’t besmirch the family name.

Lady Rutledge, Penelope and Helena’s academic teacher, worries over the propriety of the girl’s “project,” but subtly nudges them to make wise, safe and productive choices. Helena’s butler, Pierce, is fiercely protective of his young charge (while being a bit gruff and judgmental, too).

Penelope, Helena and Elijah all eventually meet the members of the Royal family, who appear to be reasoned, sensible and free from prejudice.

There is one exclamation of “Bloody h—!” We read a few mentions of drinking wine and champagne (once with a celebration and once with a meal).

Attraction abounds as Penelope and Elijah draw closer. But the closest they get physically is holding arms and waltzing on the dance floor.

Both Penelope and Elijah feel the prejudicial pressures of what people around them might think. But they handle those prejudices differently. Who do you think handles things better, and why? Does Elijah have more reason than Penelope to cover up who he is?

How do you think prejudice, of any kind, impacts our world negatively? What can we do to change those attitudes? When you look at things from a historical perspective, has our world changed in positive ways?

What did you think of the romantic side of this story? What did you like most about the way this historical drama/comedy was shaped?

My Fine Fellow is a charming play on the classic My Fair Lady story: flipping the gender roles in an alternate 1830’s London and adding in a bit of Top Chef TV show-like panache. This romantic comedy also blends in examinations of the prejudices of past society—in the areas of culture and religion—while raising thoughtful and valuable questions for today.