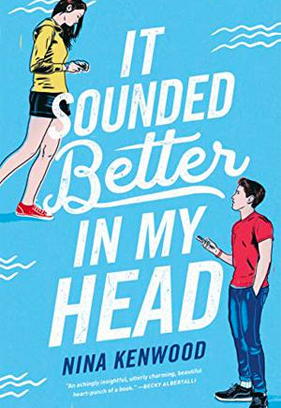 Just before heading off to college, life is coming on in a rush for 18-year-old Natalie. She finds out her parents are getting a divorce. Her two best friends are madly in love with each other. And after living her teen years as an awkward, acne-covered pariah, she’s suddenly getting attention from a cute guy. As someone who’s never even held hands before … it’s a lot!

It’s Christmas. And in the midst of a regular Christmas day of gifts and family games, Natalie receives something quite unexpected: Her parents reveal that they are getting divorced. Oh, and they’ve been working through this decision and making plans for the split and division of property over the last ten months. Without telling her!

That makes this the worst Christmas ever as far as Natalie is concerned. But it drives home one other truth, too. As she stands staring blankly at her parents’ identical please-adjust-quickly-to-our-terrible-news fake smiles, Natalie realizes that all her plans for the near future are now officially upended.

She had wanted her final year in high school to be drama free … for a change. Through all of her teen years, thanks to a rough pimply complexion that turned almost overnight into deep cystic acne, Natalie had been something of a lumpy, bumpy, awkward and generally repulsive outcast at school. (That’s when she wasn’t being called gross or a freak.)

Fortunately, with lots of medication, lots of care and concealer and lots of time, she had been able to meet and gain two dear friends. And they had planned to cruise through their last year in high school and move on to university together. She and her two best friends, Lucy and Zach, would be a friendship group—three devoted-but-platonic points of a triangle—who would face the strangeness and singleness of growing up and going to college, together.

Ah, it was a great plan.

But out of the blue, Lucy and Zach became a head-over-heels-in-love couple. And now, with her parents’ announcement to sell their home and separate, Natalie is back to being kinda alone. No friendship safety group. No familiar home base. And no idea about what will happen next.

In fact, when Natalie really takes time to think about the future, she only comes up with things that are happening for her mom, her dad, for Lucy and for Zach. How will her story play out? She hasn’t got a clue.

It’s really weird not to be the lead in your own imaginary movie!

It’s mentioned that Zach’s mom is Catholic. And as such she has some firm rules about Lucy and Zach not sleeping in the same room when the kids all join Zach’s family at their beach house. (17-year-old Zach and Lucy break those rules.) While feeling that she might be in danger, Natalie prays to “God or Whoever Might Be Listening.”

Much of It Sounded Better in My Head is an internal examination of Natalie’s beliefs about herself. Having generally always been on the outside looking in, she hasn’t had the experiences that others have had. And she wrestles continually with fear, self-doubt and self-hatred because of the struggles she’s had with her outward appearance. “Every internet quiz I do says I’m an introvert, like I’ve been given written permission to avoid everyone and everything,” she notes.

But through the course of this story, Natalie begins to recognize some of the good things about herself—her intelligence, her kindness, her humor and, yes, her attractiveness—that other people see.

Natalie has a difficult time understanding why her parents are divorcing. The clearest reason being her mother’s explanation that they were no longer “romantically” inclined as a couple. After the separation, Mom begins dating again and Natalie tends to feel protective of her emotionally wounded father. It’s clear, however, that both her mom and dad love her, and they want to maintain a close relationship with her and offer her a home, if possible.

Other parents appear loving and involved with their kids, too. But none of the parents here are in tune with the physical or partying sides of their kids’ relationships. Most all of the teens are experimenting sexually, and several get very drunk.

The language gets pretty foul at times, with multiple uses of f- and s-words and uses of “h—” “d–n” and “a–hole.” God’s and Jesus’ names are misused, too.

Natalie isn’t the party-going type and is surprised to be invited to several different teen parties. Teens get drunk and stoned. Natalie gulps down a Jell-o shot at one party and pretends to drink a beer at another, but she isn’t really into the scene. After disappointing news, however, Lucy goes to a party and gets mind-numbingly inebriated. Natalie has to recruit help to carry and drag her friend back to safety.

This is a coming-of-age story focusing on a young woman who is tasked with finding her footing as an adult and who struggles with right and wrong choices. In the process, however, she explores her sexuality—something that seemed completely foreign to her just days before the story begins. For instance, she begins thinking about her body: her breasts and her body hair and what she should do when around guys she’s attracted to. She wears a cleavage-boosting shirt that she and Lucy dub her “Boob Top.”

While talking to her mother, Natalie presents the idea that she might stay the night with a boy she barely knows. Natalie doesn’t really think she’ll do that, but she wants to stress to her mother that teens don’t date these days, they “hook up.” Her mom balks at the idea. Later, though, Natalie assumes that her mom, who’s dating again, may be hooking up with a guy she’s dating.

Natalie eventually connects with a young man who is obviously interested in her, but then she fears that she might actually just be imagining feelings that aren’t really there. She and this guy work their way through holding hands to making out for “52 minutes straight.” And since he’s experienced sexually and she isn’t, she sets things up to get her first sexual experience “out of the way” before “this whole thing falls apart and I miss my chance.” However, they talk their way through the situation and decide that it’s wiser to wait rather than force something for expediency’s sake.

Natalie also wonders about the things that make attraction possible between men and women. She sees a guy who’s sweaty after a long run and thinks, “Maybe this is what love is: You’re not grossed out by someone else’s sweat.” In that same vein, Natalie lifts up the back of her shirt to show a guy the acne bumps and scars on her back—something she is horribly embarrassed by—and he gently convinces her that the scars are completely unimportant to his feelings toward her.

We also find out that Zach and Lucy have been very sexually active, having sex after school nearly every afternoon. And Natalie trades rooms with Zach while at his family’s beach house in an effort to facilitate he and Lucy’s desire for intimacy.

This engaging coming-of-age story has received quite a bit of critical praise and notice. It uses an awkward and shy teen’s humorous insights to help her work through her self-doubts and insecurities. And the protagonist, Natalie, is very easy to like and identify with. However, there is quite a bit of foul language, heavy drinking and some frank sexual content in the story mix. And there’s no spiritual wisdom offered to counter any of the questionable teen choices. As such, the worldview that’s articulated here is that everything Natalie and her friends are doing is simply normal, growing-up type stuff.