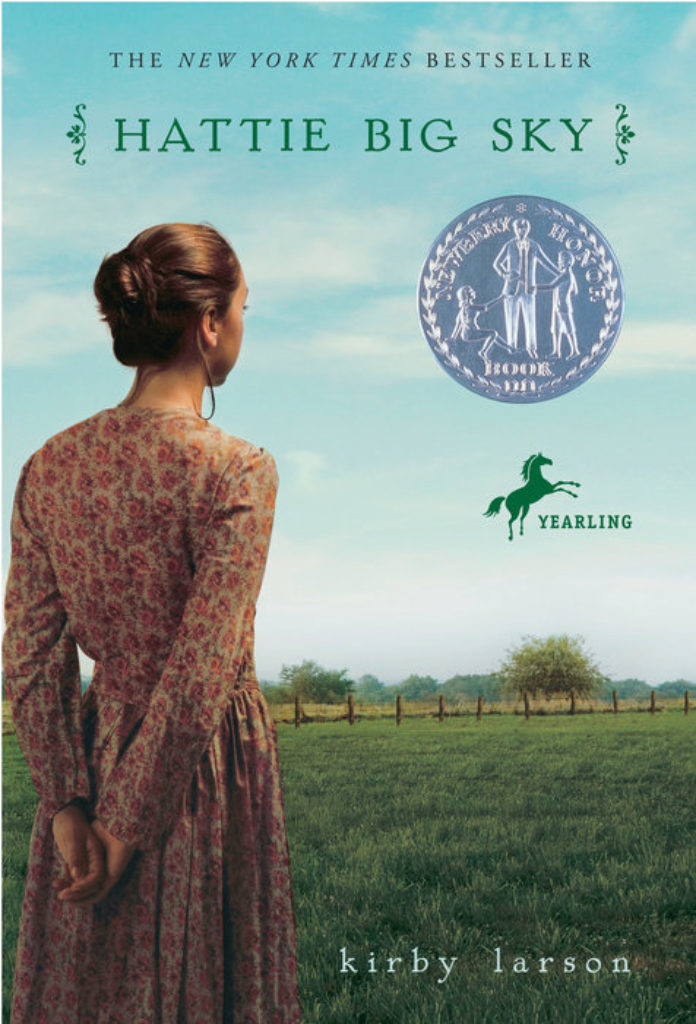 Hattie Big Sky by Kirby Larson has been reviewed by Focus on the Family’s marriage and parenting magazine. It is the first book in the “Hattie” series.

Sixteen-year-old Hattie Brooks has stayed with a number of distant relatives in the years since her parents died. In 1917, as the story begins, she lives in Iowa with Aunt Ivy and Uncle Holt. Just as Aunt Ivy prepares to hire Hattie out to a neighbor, the girl receives a letter. An uncle she’d never known has died and left her his homestead claim in Montana.

To keep the property, Hattie will have to work the land and make a profit in under a year. Aunt Ivy thinks the idea is crazy and impossible, but Hattie is thrilled at the prospect of having a home of her own. She uses her savings to take a train to Montana. Hattie often writes to her friend Charlie, who recently left for France to fight in World War I. She shares her new experiences, and he discloses his distress over losing his fellow soldiers.

Her uncle’s friend, Perilee Mueller, meets Hattie at the station in Montana. Perilee has three children — Chase, Mattie and baby Fern — from a previous marriage. She’s also expecting a child with her German husband, Karl. She helps Hattie get supplies and the necessary paperwork filed before they head to the property, which is some distance from town. When they reach the land, Hattie discovers her house is a small, primitive claim shack, with just the basic necessities. Perilee leaves her with some food, and Hattie begins her adventure alone.

Hattie has 10 months to “prove up” her claim if she wants to keep it. This means she must plant 40 acres, put up fencing and earn enough money to pay the final costs. Hattie reads up on farming, tends to the horse and cow her uncle left, builds fences and cultivates soil. She discovers Perilee and Karl, along with other colorful homesteaders — Rooster Jim and Leafie Purvis — are essential to her survival.

While Hattie battles wolves, wild horses, brutal weather and physically challenging labor, her fiercest fight is with a handsome but cruel young man named Traft Martin. Traft likes Hattie, but he says he’s concerned with the company she keeps. Traft heads the local Council of Defense, which bills itself as a patriotic organization. In truth, the group terrorizes non-Americans, particularly German-born individuals like Karl Mueller.

The group burns the Muellers’ barn, and Hattie steps in when Traft and his men are threatening and humiliating another man in town. When Traft can’t convince Hattie to come around to his political views, he tries to buy her land. She considers his offer, knowing she could purchase a house in town and have an easier life. When she ultimately refuses, his frustration grows.

Despite her many hardships, Hattie learns to love her new life and her “family” of homesteaders. She even ends up delivering Perilee’s baby when Leafie can’t get there in time. Hattie also shares in the Muellers’ heartache when an illness ravages the family and kills Mattie.

Hattie does all she can to prove up, but she ultimately faces too many obstacles. She learns she’s responsible for her uncle’s outstanding debt of several hundred dollars to a merchant. When a storm destroys her crops, she knows it will be impossible for her fulfill her claim requirements.

The Muellers decide to leave Montana for Seattle. Hattie arranges to work as a hotel chambermaid for a year in Great Falls and considers joining the Muellers after that time. Even as she rides the train out of town, she remains positive.

When Hattie first arrives at her shack and feels overwhelmed, she asks God what she should do. She hears a voice tell her to get up and get going. She makes a habit of praying daily while doing her tasks. She always begins her prayers with gratitude, even though her struggles are monumental.

Hattie sings hymns and asks God not to make her learn every lesson the hard way. When Perilee sees the goodness of God through the help of neighbors, she returns to church with Hattie. Hattie mentions Bible verses as she seeks inner strength and convinces herself to forgive Traft.

Hattie and the kids collect “wishing stones” and talk about they things they want or hope for.

Perilee, Karl, Rooster Jim, Leafie and other neighbors help Hattie and show her kindness. At the same time, they allow her the space and dignity to take ownership of her undertaking. Aunt Ivy says moving to Montana is impossible, but Uncle Holt encourages Hattie and even shares her letters with an Iowa newspaper. The paper offers to pay Hattie for her stories.

When the cow makes Hattie especially angry, she curses at it using a word she learned on the train. No profanity appears in the text. She comments that there is nothing like an occasional outburst of profanity to soothe one’s jangled nerves.

Perilee insinuates that her first husband, a drunk, hit her and left her with a limp. Traft and his men push a man down, kick him until he bleeds and make him crawl on his belly toward the American flag to prove loyalty to his country.

Prejudice: A number of the homesteaders demonstrate prejudices toward non-Americans, particularly Germans. Several of the women at Hattie’s church make snide remarks about Perilee because of her German husband. When Perilee returns to church after a long absence, they won’t allow her to join the choir. One local church is banned from offering non-English services, even though most of the parishioners aren’t American. Traft and his Council of Defense members humiliate and terrorize a man who wrote letters in support of his foreign neighbors. Some of Traft’s men burn the Muellers’ barn and try to burn Hattie’s.