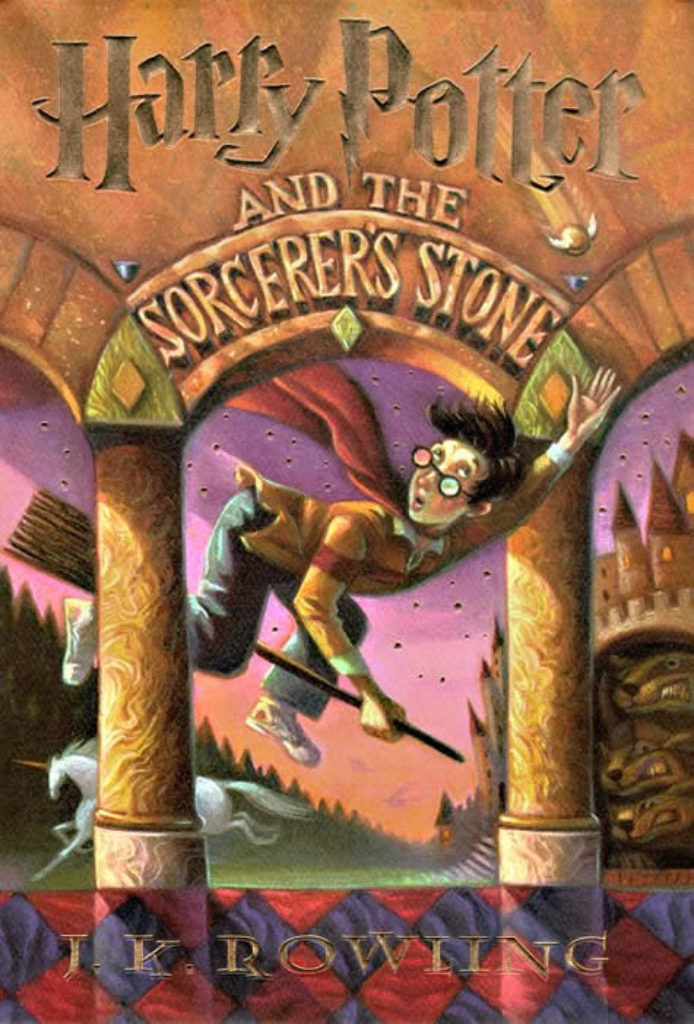 After being raised in the miserably unfair home of his Uncle Vernon Dursley, Harry practically begins life anew when he discovers that he is a wizard and is invited to attend Hogwarts School of Witchcraft and Wizardry. Among Harry’s first-year adventures are making new friends (Hagrid, Ron and Hermione), standing up to the torments of school bully Draco Malfoy, and becoming the star player on his Quidditch team (the favored sport in the magical world). Harry’s life as a Hogwarts “first-year” is more interesting than that of most attendees, because he is already famous for surviving the attack of the evil Lord Voldemort, who tried to kill him as an infant. Everyone in the wizard world knows more about Harry’s family and his story than he does, so a great deal of the book is about Harry growing into his heritage.

By far the most important happening of Harry’s first year is unraveling the mystery of the Sorcerer’s Stone and coming face to face with Voldemort. The Sorcerer’s Stone has the power to turn things to gold and to give immortality to humans. Voldemort, who lost most of his power in the battle with Harry’s parents, is desperate to find the stone and use it for his own evil purposes. He enlists the help of one Hogwarts professor, and in the end, Harry meets both of them in hand-to-hand combat. Of course, Harry wins, but Voldemort is not defeated forever.

At the wizards’ bank, Harry reads on the door the following warning against greed: “Enter stranger, but take heed of what awaits the sin of greed. For those who take but do not earn must pay dearly in their turn. So if you seek beneath our floors a treasure that was never yours, thief, you have been warned, beware of finding more than treasure there.”

Unraveling the Sorcerer’s Stone mystery, Harry, Ron and Hermione find themselves involved in a life-sized chess game, in which they become playing pieces. Two positive things here: first, Harry recognizes that Ron is more gifted than he at chess, so he defers to Ron as the wiser partner. More important, Ron proves himself to be such a good friend to Harry that he is willing to sacrifice his playing piece (and get knocked unconscious in the process) so that Harry can go on to find the stone.

Harry’s parents loved him unconditionally, even sacrificially. The message is clear about the effects of this kind of love: Voldemort says, “I killed your father first, and he put up a courageous fight … but your mother needn’t have died. … She was trying to protect you.” Later, Dumbledore says, “Your mother died to save you. If there is one thing Voldemort cannot understand, it is love. He didn’t realize that love as powerful as your mother’s for you leaves its own mark. Not a scar, no visible sign … to have been loved so deeply, even though the person who loved us is gone, will give us some sort of protection forever.”

No detailed description is given of the death of Harry’s parents. All Harry can remember is a huge flash of green light.

The resident directors in the Hogwarts dormitories are all ghosts. Two of them, in particular, have apparently died rather gruesome deaths, for they are named The Bloody Baron and Near Headless Nick, which gives some clue as to how they became specters.

Nicolas Flamel, the inventor of the Sorcerer’s Stone, agrees that it is in the best interest of humanity for the stone to be destroyed. This means that he and his wife, who both are over 600 years old, will die, because they will have no more sustenance from the stone. Harry expresses his distress over this selfless act, and the good professor Dumbledore responds, “To one as young as you, I’m sure it seems incredible, but to Nicolas and Perenelle, it really is like going to bed after a very, very long day. After all, to the well organized mind, death is but the next great adventure.”

As previously mentioned, an evil professor tries to knock Harry to his death (or at least to serious injury) during a Quidditch match. This same professor slaughters a Unicorn in order to drink the life-giving blood of an innocent animal.

Preceding the final match with Voldemort, Ron is knocked unconscious as he, Harry and Hermione struggle to solve the mystery of the Sorcerer’s Stone. The final battle itself is an intense struggle, for Harry soon discovers that Voldemort cannot touch his body without being badly burned. As Harry’s encounter with Voldemort rises to a climax, Voldemort screams at one of his followers, “KILL HIM! KILL HIM!”

Harry is treated horribly by Uncle Vernon, Aunt Petunia and cousin Dudley Dursley. The Dursleys make Harry sleep in a closet, and they make no excuses about denying Harry simple pleasures while spoiling Dudley (“Every year on Dudley’s birthday, his parents took him and a friend out for the day, to adventure parks, hamburger restaurants or the movies. Every year, Harry was left behind with Mrs. Figg, a mad old lady who lived two streets away. Harry hated it there. The whole house smelled of cabbage, and Mrs. Figg made Harry look at photographs of all the cats she’d ever owned”).

The Dursleys are not characterized in such a way that the reader understands them to be a respectable or even a normal example of a family. In fact, the Dursleys are set up more as an example of the damage that is done when a child doesn’t have a real family. Children who have been neglected are likely to identify with Harry and be encouraged by his success at changing his station in life.

The Hogwarts community becomes a kind of surrogate family for Harry. He has a better Christmas at Hogwarts than he ever had with the Dursleys. And through his new friend, Ron Weasley, Harry is semi-adopted into the Weasley family, who care for him and even send him gifts, though they are poor themselves.

Throughout the story, there is the understanding that Harry’s real family truly loved him and would have treated him well. Finally, Harry finds them through a magical mirror called Erised (desire spelled backward.) In the mirror, he is able to see his mother and father looking at him longingly and waving. The mirror is intended to show its viewer the deepest desire of his or her heart.

J.K. Rowling paints a detailed picture of each of the prominent professors—McGonagall is fair and an excellent disciplinarian; Snape is grouchy and vengeful; Quirrell is stuttering and spineless; Dumbledore is wise and altogether respected. Harry and friends figure out early where their loyalties lie and what they can get way with in the classroom. They respect McGonagall and Dumbledore most, because these two are upright, wise and understanding.

Hogwarts rules include no fighting, no sneaking around after hours and no use of magic outside the classroom. Harry and company find a lot of their adventure in breaking the sneaking around rule and usually wind up saving someone or making an important discovery when they’re doing things they shouldn’t. They are always justly punished when they are caught in their misdeeds.

Hermione is the dissenting voice, always warning Harry and Ron that they’d better toe the line. Unfortunately, it is when she finally concedes to breaking the rules (for a good cause, of course) that Hermione proves herself a true friend to Harry and Ron (“Ron dropped his wand. Hermione Granger, telling a downright lie to a teacher?… Hermione was the last person to do anything against the rules, and here she was, pretending she had to get them out of trouble. … From that moment on, Hermione Granger became their friend”).

In the end, Harry repents of his rule breaking: “It was a bit late to repair the damage, but Harry swore to himself not to meddle in the things that weren’t his business from now on. He’d had it with sneaking and spying. He felt so ashamed of himself.”

Hagrid, the school’s caretaker, likes to drink (both for social reasons and to calm his nerves). “Everyone [in the bar] seemed to know Hagrid; they waved and smiled at him, and the bartender reached for a glass, saying, ‘The usual, Hagrid?’ ‘Can’t Tom, I’m on Hogwarts business,’ said Hagrid.” Hagrid does renounce his drinking habit when he realizes that while he was under the influence, he disclosed secret information that could have cost Harry his life. (“It’s—all—my—ruddy—fault! … I told him! Yeh could’ve died! … I’ll never drink again!”)

Witchcraft and wizardry are central devices in this story. And they are presented in a very stereotypical manner. For example, Harry’s school supply list includes “three sets of plain work robes (black) … one pair of protective gloves (dragon hide or similar) … one wand, one cauldron (pewter, standard size 2),” and books like “The Standard Book of Spells … Magical Theory and One Thousand Magical Herbs and Fungi.”

References to dark magic and other evils that pertain to the “dark side” are included, but they are never presented as desirable. Every character who is allied with these forces is an enemy or at least a tormentor to the hero of the story. For instance, one evil professor uses powerful dark magic to try to knock Harry off his broomstick during a Quidditch match. (On a cultural level, Rowling can be commended for steering young fans away from the so-called dark side, but from a spiritual perspective, it’s clear that there are not dark and light sides when it comes to witchcraft; it’s all as black as sin.)

The most intense example of dark magic occurs during Harry’s confrontation with Voldemort, when the evil one tempts Harry to come over to the dark side in order to save his own life: “‘See what I have become?’ the face said. ‘Mere shadow and vapor. … I have form only when I can share another’s body … but there have always been those willing to let me into their hearts and minds. … Don’t be a fool. … Better save your own life and join me … or you’ll meet the same end as your parents. … They died begging me for mercy.'”

“Sunshine, daisies, butter mellow, turn this stupid, fat rat yellow” is a spoken charm typical of what Harry and his friends learn at Hogwarts. Some children may be fascinated and want to try these seemingly harmless spells for themselves. Not a wise idea, considering how very real the occult is. The meaningless charms found in this book may not summon occult forces, but there are real charms that do.

That said, Rowling presents life in the supernatural realm as much fuller than life in the physical realm. Colors are brighter, people are more interesting and life is more exciting and surprising. But the side of the supernatural world that Rowling presents is not really the side that offers this abundant life. In fact, biblically speaking, to participate in the world of witchcraft brings death rather than a fuller life (1 Sam. 28:6-18, Is. 8:19 and 47:12-14). That’s more than enough reason for families to think long and hard before embarking on Harry Potter’s magic carpet ride.